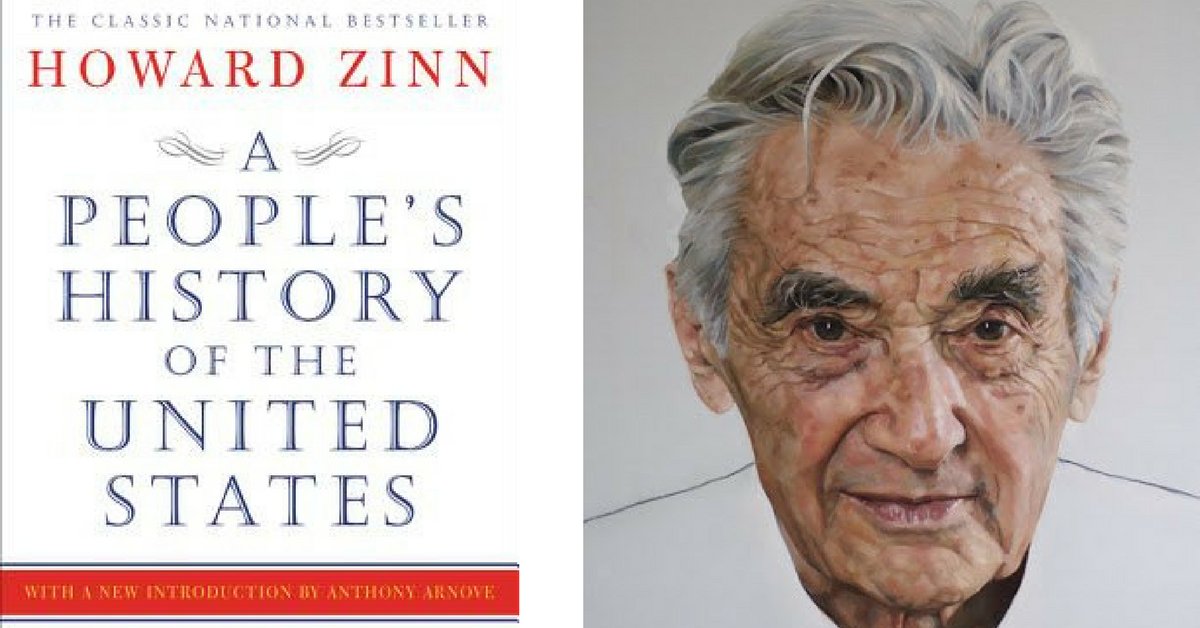 Here’s why I picked up Howard Zinn’s 685-page history tome, even though I feel like I dwell on the past too much, even though it was a pain in the neck to cart around: “…with all its limitations, it is a history disrespectful of governments and respectful of people’s movements of resistance. That makes it a biased account, one that leans in a certain direction. I am not troubled by that because the mountain of history books under which we all stand leans so heavily in the other direction that we need some counterforce to avoid being crushed into submission. All those histories of this country…suggest that in times of crisis we must look to someone to save us; in the Revolutionary crisis, the Founding Fathers; in the slavery crisis, Lincoln; in the Depression, Roosevelt; in the Vietnam-Watergate crisis, Carter. And that between occasional crises everything is all right and it is sufficient for us to be restored to that normal state. They teach us that the supreme act of citizenship is to choose among saviors., by going into a voting booth every four years to choose between two white and well-off Anglo-Saxon males of inoffensive personality and orthodox opinions.”

My how things have changed since 1980, when this book was first published, and it’s not that our choices now include women or poor people or consistently people of color. But back to voting in a minute. My route to work now includes the 7, though only briefly, but that was enough to have an interesting exchange with a black World War 11-era veteran (yes, the guy was in his 90s; I had to ask a few times since he looked about 65).

“Hey, I read that book,” he said in a beautiful, James-Earl-Jones deep voice.

“Oh, yeah?” I peeked over the top of it to get a sense of how this might go. He was smiling and clutching a splotchy rainbow-colored umbrella. So far so good.

“Yeah. Didn’t really need to, though, since I lived through about half of it and the rest is in my bones.” I see the start of a raised scar on his forearm that disappears under his banana-yellow polo sleeve, the flesh so pink it might have bubbled up yesterday.

Which is how Zinn made the past 400 years feel to me, though maybe that’s because this book makes it sharply clear that what’s horrifying, or what should be horrifying, about the present times is not that they are, as is repeated ad nauseam in the media, “not normal” but that, in fact, they are. As he explicates the ceaseless vortex of atrocities those in power on this land have been committing even before the US was a country, Zinn’s prose is spare, like he’s sparring with you but over marmalade and microfiche. Still, the details in his reportage, which he lets scream for themselves, are overwhelming. And that’s as it should be.

“Halfway through the book is about World War II, sir. Did you mean the Impossible Victory: Vietnam chapter a hundred or so pages after that?”

“Missy, I’m proud to say I never gave no service in that state-sanctioned glut of slaughter.” His chest broadened. “No, I served in the only just war man’s ever fought.”

“I used to justify World War II, too, but Zinn seems to think World War II was business as usual.”

He looks stung but I continue. “I mean, Zinn reports that Roosevelt could have rather easily acted sooner or taken steps to dramatically reduce the number of casualties in Hitler’s death camps but didn’t.”

“Now why would someone go and do such a thing, Missy?” It’s not really a question but I answer it like it is.

“Money – which political leaders call ‘economics’ when they’re talking to the public, why else?”

He waves his hand at me the way Baby Boomers do to us entitled, lazy, uneducated Millennials. “Well, I didn’t vote for the guy, anyway.”

Before I can stop it, Mark Twain comes out of my mouth: “If voting made a difference, they wouldn’t let us do it.”

He laughs like you would with a comrade and, I’m not kidding, recites word for word what I know to be David Foster Wallace’s thoughts on voting: “If you are bored and disgusted by politics and don’t bother to vote, you are in effect voting for the entrenched Establishments of the two major parties, who please rest assured are not dumb, and who are keenly aware that it is in their interests to keep you disgusted and bored and cynical and to give you every possible reason to stay at home doing one-hitters and watching MTV on primary day. By all means stay home if you want, but don’t bullshit yourself that you’re not voting. In reality, there is no such thing as not voting: you either vote by voting, or you vote by staying home and tacitly doubling the value of some Diehard’s vote.” He winks. “Two can play this game, Missy.”

“So what happens when you have two candidates that are so reprehensible it couldn’t even be characterized as choosing the lesser of two evils, as if that were an acceptable situation, like millions of people thought happened in the most recent election?” I try to keep it neutral; my stop is coming up and I really want to hear this guy’s thoughts. “Do you stay home and double the Diehards’ votes on both sides then?”

“You can blame the last election on the people who claimed they felt too alienated to vote and stayed home.” He says quietly and nods. “There were enough of them that the outcome would have been different had they showed up at the polls.”

Numbers-wise, he’s probably right. Socio-economically, culturally, I would even say spitirually, I’m not certain. “Zinn, Twain and I would disagree. And I think this book makes a pretty good case about why.” I stand for my stop – I didn’t intend to leave in a dramatic flourish like this so I hold out my hand, which he grips strongly and shakes. “Blessed day, sis.”

I barely manage to say “Blessed day, sir” and turn around before I’ve got tears steaming on my face. It’s so rare these days – and so precious, evidently – to have a disagreement with someone and not get the emotional snot beaten out of you but rather, to end in a genuinely positive space. Blessed day, indeed.

It’s also rare (and thus refreshing) these days when people acknowledge their shortcomings and bear their biases clearly. Zinn does both – he apologetically admits he did not cover the LGBTQ movement in the detail it deserves and seems conscious of the fact that women get two, maybe three chapters’ worth of concerted attention in a near-700-page work – so I hate to complain. But there is another issue he leaves out almost entirely, and it’s imperative to mention, at the risk of ruining the blessedness: that of disability, particularly mental illness and the struggle of those who suffer mental and emotional distress for justice.

Mass injustice – involuntary drugging; incarceration (it still feels like prison even if it’s a hospital if it’s against your will), electro-convulsive therapy (on which there is finally a moratorium only because of the lawsuit against the manufacturers of the device that administers the shock, due to the research that demonstrates the “treatment” causes brain damage); systematic discrimination in the workforce; isolation and abandonment (more engagements than I can count have been broken off after a mental-health diagnosis, and those are just the ones I know personally); persistent and damning stigma – has been perpetrated against people with disabilities and mental illness by the government and the public alike. Just because there haven’t been protests doesn’t mean there isn’t a movement – a people’s movement that deserves a central place in the historical record, especially one that claims to be counter to the usual perspectives from which the story is told. It will be more than a blessed day when not just a renowned historian but the average citizen knows who E.D. Roberts and Roland Johnson are, or at least when you start typing “leaders in the ________”, Google will actually suggest “psychiatric survivor movement” or “mental-health movement” as real options.