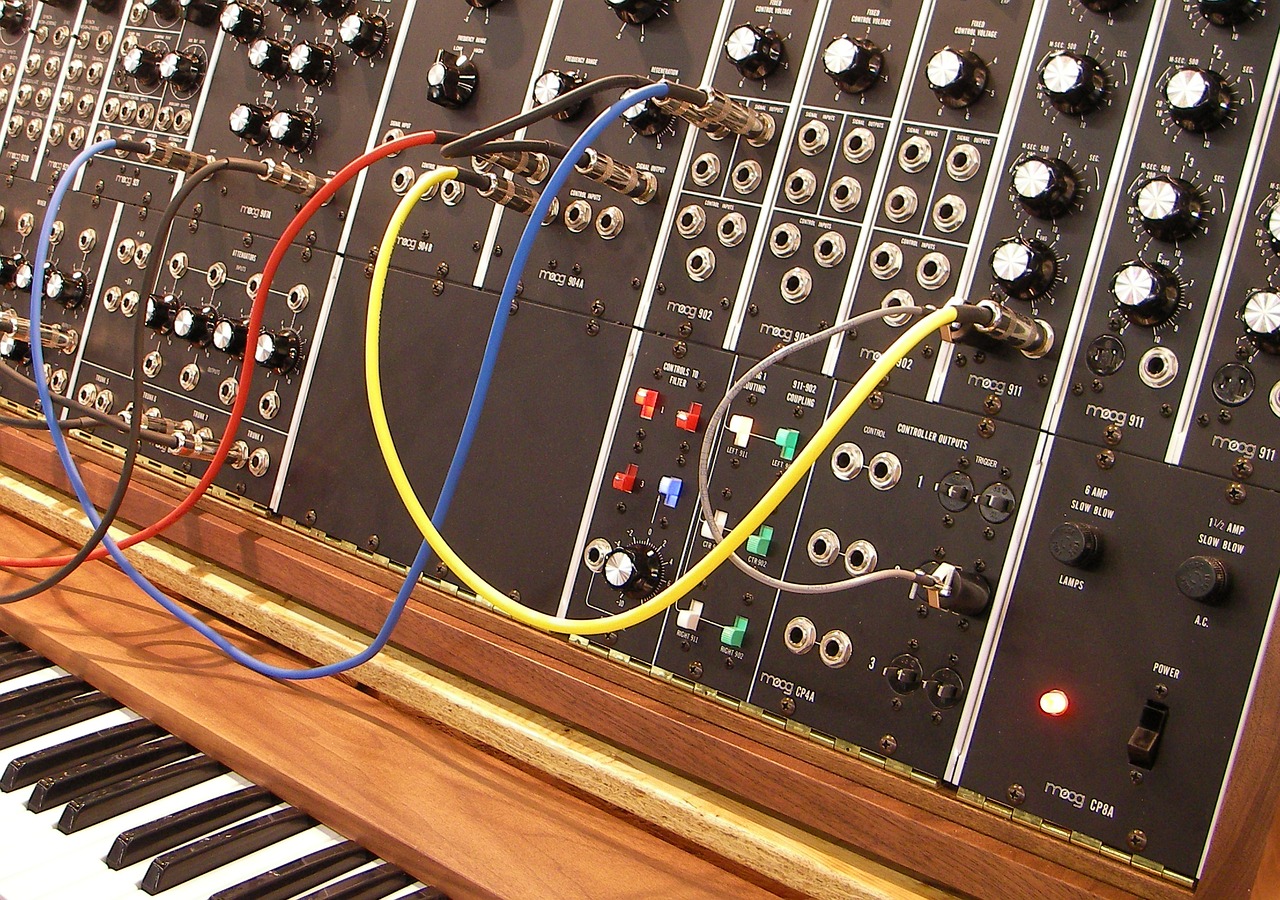 Steve Peters opens the proceedings thanking the assembled. On a rare, gorgeous June evening in Seattle, who willingly opts for an indoor concert of experimental sounds and vision?

Vibration, slow-mo oscillation, low alternating pitches gradually resolve to fuzzy distortion and increasing volume. Minimal sonic choices force the ear to attune to subtle changes in pitch and intensity. The intensity rises. I can feel the woofers struggling a bit. Now it is a chugging motor boat or a large, lazy, off-kilter fan. After 10 minutes or so of haze inducing oscillation, a series of high blips enter like a circus pinball machine.

Hair hanging over her face, Psarra hunches over two tables, one covered in electronic gear overhung with cables; the other adorned with embroidered fabric textiles dotted with contact mikes and/or sensors of some kind. (Later I note one of the pieces of fabric, roughly 2 by 3 feet, is embroidered (beautifully, realistically, even comically) with a Korg synthesizer. When asked, “Yes, it is a circuit, just made of threads.”)
So we are listening to Psarra’s improvisations governed in some way by the textile’s embroidered texture. I am reminded that Plato in the Republic is suspicious of embroidery (among other things) on the notion that artistic representation is a form of mimicry which, in its fancy doubling of reality, puts into question the quest for certainty, and puts visual perception as a matter of play and pleasure rather than knowledge (as if a line divides those two realms). The reality Psarra exposes here by the sensing, modulation and amplification of electrified fabric is an opening to what otherwise cannot be perceived, to what is hardly there until captured and given aurally perceivable form. So, more a Heideggerian exercise: it’s neither a subversive nor (falsely) reverential doubling; it is an exposure or a disclosure, answerable, at least in part, to Psarra’s anticipated notion of a sound sequence that makes sense, that gives itself over to beauty. Though, of course: accidents and response.

The bass intensifies—now it is the speed of a chainsaw, but guttural. Over it the fuzz circulates through a maze like a moving squirrel cage. She adjusts the contact mics on the fabrics, or maybe just selects among them. Now she concentrates on the board, making adjustments. I can’t link her movements at all with my ears. Now a quicker oscillation reaches a higher pitch, a background buzz underneath, the low rumble fades away.

First Friz walks the room, circumambulating the audience, playing static on a handheld radio, turning the dial, pausing at intervals, never long enough to receive and broadcast a clear signal. She circles back to her table, stage left, adorned with a large mixing board attached to an assortment of DIY synthesizers, old school radios and shortwaves with antennae poking in various directions. Like a punk rock experimental scientist, Friz stands bent over her equipment, her short white-blond hair contrasting her all black get-up, a blue scarf managing the transition to skin. At center stage, framed by triple height curtains, the Chapel’s very tall and wide white back wall is set to receive images from a small projector perched on a stool.

The moving pictures begin, accompanied by sound. On the screen, a white mist from which slowly emerges in black and white a vista of elegant skeleton scaffolding linked by power lines. From low resolution to high the images take shape, and then the images shift to a new but related idea.
For our ears a two-tone oscillation of longnotes: 2-1,2-1, I believe. A shortwave radio blips, like the opening of that Stereolab song that opens (their very fine record) Dots and Loops: dash, dot-dot, dash, dot. Now a man’s calming voice delivers a weather report. For our eyes, more views of power lines, more scaffolding, dark against grey-white skies, somewhat mournful and proud. Knot after knot of the electric grid. Street lights, telephone cabling, power poles, streetcar and electric bus wires. The calligraphic cursive signature of electricity.

The tones shift to 3-1, 3-1. The pace has slowed, a second oscillation enters–a slow throbbing against hisses and hums and static breaking up. The images fade leaving what looks like a small collection of significant stars, the little dipper, or maybe Orion’s belt. (But afterwards, she clarifies: not stars, rather simply the reduction of the image with all light removed, leaving the small pin- pricks which remain.)
Blips enter the sound-fold. Friz is improvising: selecting, amplifying the waves in the room. Some samples she has clearly brought with her, but the oscillating static is live, I believe. She brings out a walkie-talkie. She blows into it—another blast of the Stereolab motif—clicks, and now she verbalizes, becoming a sender of signals: daduit, dada, ddddohdit, dit, dah, and so on over the hiss and pop and blips. Now a familiar, man’s monochrome voice comes through: an air traffic controller directing a pilot in that peculiar airman’s code. On the screen no planes, but yes power grids over a backing cloud of hums and pulses.

How to assess it all? The stark photos are gorgeous, and her sensory machines make present for our ears the waves always all around us. In terms of materials, Friz says she is interested in lo-fidelity. It reads like an aural and visual commentary on how the modern has aged. Not well. Not like the stars. The antennae, the walkie-talkie, the shortwave—all antiquated. This is not a salvage exercise, nor is it nostalgia. The collection of oddments live, and are a bit angry, they are not yet relics. Also there is melancholy here—in our digital age of hyper-clean, the previous infrastructure of doodads and electric wire remain, even dominate, but somehow invisibly—yet as vitally as ever. They live in a time that has passed it by—even while knowing they remain absolutely essential, and their vitality has yet to be reckoned with.

Friz closes her walkie-talkie monologue as in a letter: “Dear listener, all this power.”