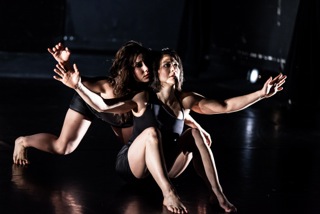 I missed the first two nights of the BOOST Dance Festival at the Erickson Theater, so I missed Michele Miller’s latest work, but I did see eight of the nine pieces that played over the weekend in this extended show.

The second half of the evening in many ways was the most interesting because it featured a rare quality that dancers often ignore: silence. Alana Rogers’ piece, ID, relied upon dramatic silence and open floor space. Elia Mrak’s piece, erica, was completely silent. Even the chatty Marlo Martin dance, without context or provocation, left moments of effective quiet near its end. It was a refreshing quality to see at a time when so much of dance is always moving, always expressing, always loud.

Billed as “a duet,” erica is actually a piece danced by Erica Badgeley with an hourglass. It is no surprise that Ms. Badgeley’s costume is stark white: Mr. Mrak’s piece is an exercise in purity, and on the sensuous level that purity fascinates me. It also makes me entirely conscious of how much dance depends upon music, even when choreographers originally create their pieces without music at all. Ms. Badgeley has been involved in similar explorations along these lines in the work of Kate Wallich and Jeffrey Fracé recently. She is pliable enough to take on such a challenge and still make very impressive work out of it.

I am a little less enthusiastic about Anna Conner’s A Nest of Luna. The piece has a structual firmness and plain-spoken quality that is effective. The three dancers stand in a horse stance, legs spread, with their torsos undulating shoulder to shoulder. From this position they explore a sort of cubist take on space, pivoting left then right, about face, giving the audience multiple perspectives on the curves initially created. The piece then uses a series of rigidly structured trios that gradually break into solo vs duo moments in which Ms. Conner plays with the negative floor space between the dancers and various repetitive variations before finally unifying again and breaking down. It is all quite elegant. I grasp the piece, I think. It simply is not my kind of piece. That is hardly Ms. Conner’s shortcoming, but mine. The work strikes me as a fairly good idea but not an extraordinary one. Again, this is no one’s fault but mine, and I am certainly willing to admit I am just not sensitive enough to the material at hand. Others will probably find it fascinating.

Marlo Martin’s without context or provocation turns away from the emotional relationships that structured her tenSIDES last year, toward a sort of thoughtful introspection. It is difficult from this excerpt to get a complete picture of what the full dance will be, but it is apparently more expository than her recent works. The piece opens with two overlapping voice tracks that sound confessional, like something between a diary and an interview with an artist talking about her biography and creative process. The movements of the dance take this text as counterpoint rather than as something to illustrate, but the relationship is clearly interdependent throughout. I like watching Ms. Martin’s dancers, especially Nadia Losonsky and Alex Goldstein who always impress me with their dedication. One could easily appreciate the work simply on its physical level but there is a sharp intellect at work behind it all.

The first half of the show featured three pieces that derived from female archetypes/stereotypes, and one piece that seemed completely out of place–in the best possible sense. The wrench in the works was MaryAnn McGovern’s Recipe for Polarity, Part 1: Cacophony. “Cacophony” makes it sound so unpleasant. In fact, it was my favorite piece of the evening. It is by turns talky, obvious, competitive, and downright brusque. It is also playful, joyful, blithe, and witty. It has been awhile since I actually smiled at a dance event but Ms. McGovern’s piece filled me with laughter. Its setup is straightforward enough–the dancers tell you ahead of time what they are going to do–but the wonderful relationships between the dancers lift the process from banal illustration into a truly lyrical state: It is like a kind of street poetry of dance, simultaneously rough and smooth, competitive and cooperative, crass and elegant. This is the first work of Ms. McGovern’s I have seen and already I am anxious for the next.

The other three pieces are more thematically similar. I greatly enjoyed Kristen Legg’s An Irritating Cerebral Itch. Ms. Legg’s dances are always lovely in their combination of emotion with formal restraint, and this piece, while not as directly melancholy as Ms. Legg’s piece from last year Mother may I…? still proves that combination is effective. The piece revolves around a static figure (the lovely Karena Birk) immobilized within a kind of abstracted 19th Century ball gown. The remaining figures on the stage explore various levels of movement, quite formal at first but growing progressively more open and free. It is simple, clear and forceful. Ms. Legg clearly has a good relationship with her dancers. Mary Kirkpatrick is always enjoyable to see. Her quirky solutions to movement always interest me and are fascinating to watch. And I could watch Carla María Negrete Martínez for hours and never tire. This piece gives the whole cast a number of opportunities to shine, which they do quite naturally. I look forward to seeing the whole piece.

Sarah Kathryn Olds’ piece, murTOWN, is the most modest piece of the three in the first half. I presume that Ms. Olds, who has spent time in the Los Angeles and Riverside areas, takes her title from the town of Murrieta. My memories of Murrieta (the self-proclaimed “future of California”) are that it is a fairly desolate suburb filled with BMX posers and yuppies on the prowl. Obviously Ms. Olds has more affinity for it than I do, because her piece is a quite beautiful study of twos and threes, with a very generous use of balanced figure groupings and extreme perspectives with some typically brittle Phillip Glass music against which to work the variations. I still have no interest in ever going back to Murrieta, but at least Ms. Olds’ piece makes me think about it.

The piece that opens the evening is Maya Soto’s study of female archetypes, Declarations of War. I have always admired Ms. Soto’s work and this is no exception. The piece begins by showing a procession of decorative debutantes in full garb, but this explodes into an essay on the warrior woman, with the dancers evoking the forms and tropes of Amazons, onna bugeisha, Yang family generals, and others–I could swear I saw a couple of them carrying an atl-atl at some point. The images are visceral, primal, violent. But the violence here is stylish violence without consequence: everything here is noble and grand, far removed from the brutality of war itself. Even the fallen figures look as carefully composed and clean as French neoclassical painting. At the end of the dance when the Queen appears to walk across the stage slowly, stately, the contrast is stark but I have a sense the dance is not done yet, and in a sense it is not: this is an excerpt. It is a good showcase for the dancers including Carla María Negrete Martínez again, Danica Bito, Jana Kincl and Ms. Soto herself.

The festival as a whole strikes me as a truthful representation of modern dance in Seattle right now. Adjudicators Amy O’Neal, Kate Wallich, Marlo Martin, Kristen Legg, and Matthew Baker have chosen well this selection to represent the city at large. It is far from complete, of course–no festival can be–but an impressive sample nonetheless. The scene is diverse and vital. I look forward to seeing what these dancers and choreographers invent next.