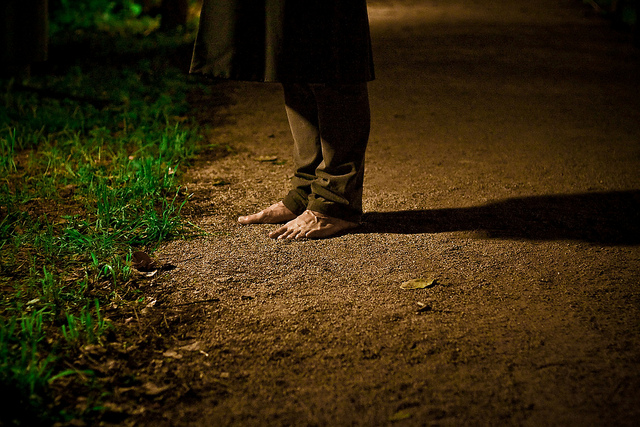 from the novel Affair

Palo is outside the door. He sits bareassed on the step, which is a log ripped lengthwise, which is what it means to rip a log. It was probably ripped with a whipsaw, because that is how logs were ripped before everything was milled lumber. The step was probably whipsawed then, by two men, two men who knew how to saw, two men long dead along with the ability to saw, two sawyers, one down in the sawpit, the other atop the log. A great exertion was exerted to make the step Palo sits on. Someone once really wanted this step and applied their skill and muscle to make it. He sits neither gratefully nor ungratefully. Rather he is neither grateful nor ungrateful for the step. What is the posture of gratefulness? His sitting is ungraceful. His posture is ungraceful. His position is ungraceful. He pulls on his socks still damp from his earlier exertions in climbing up the mountain. He places his feet in his boots and laces them tight. Though haste would seem appropriate, and he did indeed not make any effort to somehow reclaim the remains of his underwear to string around his waist, nor is he attempting to salvage his pants from Antoinette’s teeth, for she put them there for a reason, for surely there must be a reason, for there always is, in this case perhaps to muffle or stifle, which?, her cries, or perhaps she did so to not bite off her tongue in an epileptic fit, or it could be some combination of the two, and even if the dependent clause is far too far from the independent clause, which is slow to come, but must if it is not to completely disregard the physical laws and inherent constraints of being a part of a larger sentence, or rather the independent clause is its own sentence and therefore the dependent clause would be doing the disregarding, which would be to abandon its identity in the hubristic hope of becoming more or less or precisely what it is, and, but, or, although if intent is to be laid on a clause perhaps the independent should be laid with it, for it is what waits, withholds, clamps, wanting desperately to come last, for all clutching clauses to come before it, to deposit the last word, and in that self-revelatory pursuit it abandons all the dependent clauses before it which depend on it, which need it, which beseech it to be present with them, connected to them if only by a comma, or even a conjunction, even if grammatically tenuous, until they finally say a ragged and naked fuck you and walk off to become their own frowned upon, misunderstood, incomplete sentences, he does not begin to think of going without his boots. Not without his boots.

He left his sex-saturated shirt in the bathroom. His torso regrets it; the rest of him knows his torso would be colder for being clothed in a wet shirt.

He left all his sticks. Which he should regret because they are his life’s work, but he needed his hands free to open and close doors and be ready to ward off Antoinette if necessary, which was not necessary, and his hands are not hands that are adept at juggling. Instead of regretting his sticks, he is happy he left them. That sounds sick, him happy at a time like this. Satisfied. Pleased. No, no. You must understand this is a minute happiness, a seed of happiness in a great plain of grass and sedge and unhappiness, a sort of self-loathing happiness, a pleasure in personal pain kind of happiness. An inability to be completely consumed by pain, an animal reflex to find the positive in the void. No, perhaps no matter what way he says it, you will not understand. He figures if he is going to ruin his life, which he has done, he may as well ruin it all, every aspect, smash it leave it fuck it, so that he, Palo, may cease to exist. Ceasing his existence is an act that would satisfy him.

But for now, he needs to go. To get away from Antoinette, so she can begin the slow climb out of the hole he puts her in by going. He does not know what he has done to her, he cannot, he is not inside her, except that she is crying. He does not know what she expected except sex, except that sex is never just sex. He has hurt her and he hurts her more by going but staying longer hurts Reb more if there is any adding to how much he has hurt her if her hurt is not already infinite, if there is a finite amount of hurt divvied amongst the three of them, like they are each teacups and the hurt is poured into them by an unseen hand, which would imply a perhaps limitless quantity of hurt, although each of them would only be able to hold so much before overflowing. Which may explain tears. Or perhaps he is the teapot, the source of the hurt, the quantity of which may as well be infinite relative to the capacity of the teacups, and so by going away he takes the hurt with him, to let the cups’ hurt evaporate to emptiness. Which at least would give him a reason to go away.

Which would be and is very elegant. But the reason he goes is he cannot stay. It hurts too much. He is not a man familiar with hurt, if there are such men. He was such a man, if there ever were. He now knows emptiness. He now knows he is a man who cannot stand with such hurt, he can lie with it or he can walk with it. He will try walking for a while. But he left a large piece of himself in the bathroom. He is not sure which piece it was. Perhaps the piece that cares.

You said you were leaving.

Fuck trying. You’re talking. Do it, you fuck. Go.

She pelts him with the stick. She reaches for another. He does not know what to do. He was going to go, but being hit by the sticks hurts, and something inside of him, probably the hurt, wants the hurt inflicted by her to never stop. He looks at his feet, rather his boots on his feet, waiting for a crown, a mantle, an armor of stick pain. He feels blood trickle. He will stay. He will give her all his blood, trickling, dripping, globbing on the ground. He will die for her in a prolonged ecstasy of pain and blood and bowed head.

In the dirt at his feet is scratched the word WALK. This is an unusual place for the written word to be, which speaks to him. He listens to this word in the dirt. If nothing else, it reminds him he is not the only person in the world. He changes his mind. He turns. As he walks out of the clearing in the larch grove, past the almost but not quite saturated ground of the splash zone and leech field of the outlet pipe, and into the larch grove and away from poor beautiful lonely woodland gypsylike Antoinette forever, she throws stick after stick after stick after him without words, each of which stones him in the back, each of which he relishes.