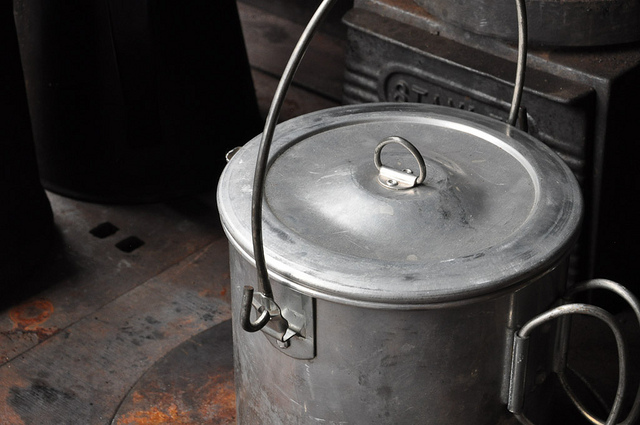 [/media-credit]
from the novel Affair

The Author sips coffee. The coffee is cold. The sun is rising, god bless. A child, one of his own, screams from downstairs. A ball bounces. Several thuds in succession. He sips coffee. It is still cold. Grounds in his mouth. He spits them out, but he can’t spit them all out. He resigns himself to a few grounds in his mouth. He stretches. He is unable to write more, but he is not ready to go downstairs.

He does not want to write a story about writers, so he isn’t writing one. What’s important to writers isn’t important to people. No one wants to read about writers; they want to read about the old in-out, the dive into the deep end, the fluid swap, the skin thwack, the love buggery, the conjugation. And what readers want to read he wants to write; he wants to satisfy the reader; the reader is who is important; if he uses the semicolon too often for the reader’s enjoyment, he is sorry, but he does it anyway; it is easier to ask forgiveness than permission, and the semicolon is better than the colon, and he is not the one who put the reader’s colon so close to the reader’s sexual organ, and sometimes the reader doesn’t know what will give the reader pleasure until the Author does it: the Author does it to pleasure the reader because that is why he exists. The reader is who buys the books, a small percentage of the profits from which pay his mortgage and feed his children, who also read and will one day be readers who likewise dutifully support the publishing economy and receive pleasurable entertainment in return.

That’s not true, he allows, Mary pays the mortgage. He plays Shostakovich or one of those insane Russians on headphones and tries to create a world out of ink that people will want to pay to live in, no matter how sick it is or they are. Mary teaches Geometry. Sometimes Algebra.

What it is is a story problem, he thinks. He writes because that’s how he thinks, he thinks. He thinks it all reduces to arithmetic. If he were to buy a Happy Meal or two, for example, some small percentage of a small hypothetical royalty on a hypothetical book sale would go toward the Happy Meal purchase, a small percentage of which in turn would go toward the minimum wage of the teenager at the counter, who could then exercise their freedom of market choice to choose which of the latest bigbreasted airbrushed computer animated celluloid creations receives in their engorged account their small cut of his money within the small percentage they derive from each movie ticket sale. Well, that felt good and was untrue. He will cross it out. Later. Symmetry is attractive in geometry, fiction, art, and bodies and faces and leaves and flowers and crystals and the swirl of how birds take flight and the bend of blood cells folding through capillaries and a whole host of natural phenomena, but in reallife he believes most actors have small or at least normal boobs and are not computer graphics and are paid a flat daily fee rather than a percentage of earnings or piece rate like a migrant apple picker.

Oh, for the symmetry of the circle of life. Oh, to not have written the phrase the circle of life. Oh, but for his reallife to not creep into his fictitious life. Oh, for his children to not have watched a certain Disney movie last night while he failed to read the New York Times, the last newspaper on paper and he far from New York and out of time. Oh, for dreams devoid of lions and kings. Oh for pleasant dreams; oh to soundly sleep; oh to be a king.

Oh bother. Some of his small earnings from book sales spent on his Happy Meal deprived children will, via the beef but in the opposite direction, that is from beef to cow, lovingly travel to cowboys in Brazil. Except way down there, he tells his daughter as she comes crying her brother’s name but all wrong and with only one vowel-heavy syllable into his office, which is a corner of Mary’s and his bedroom sectioned off by a Japanese screen with a tree overhanging a creek and falling leaves and abstracted flowers and an angular bird, possibly a crane, these words being images painted on the screen not objects present in his corner office, which contains just enough space for he and his chair and his desk and now somehow his daughter on his lap, cowboys are called horsemen. In that language. Maybe he’s wrong. Maybe it’s Argentina.

It doesn’t matter; the beef is from a place he’ll never be. Like a cow.

He’s being sentimental. He must be hungry.

He has stopped writing words people want. It was an accident. He has stopped working productively. An inability to focus. He has stopped creating. A lack of rigor. His daughter’s face is in his, fat and soft and fleshy and saying, Hi, hi, hi, hi, hi. He says, Hi. He licks her nose; she lays her head on his shoulder. He stands and leaves his office and carries his daughter Lilly past the sleeping Mary with a pillow over her head and past the piles of clothes dirty, clean, and in-between to the bathroom. He needs to pee and then he needs to teach Lilly to pee in the toilet instead of her pants, and then they’ll flush their pee together and if he’s lucky her poop and she’ll crow Bye-bye! as the liquid yellow and if he’s lucky solid brown or pea green or carrot orange or beet pink swirls and disappears forever.