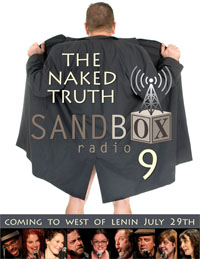 When it comes to building a new model for the sound of audio theater in the 21st Century there is no better architect than Leslie Law. With a heaping sandbox and little more than a bucket and pail, she and her playmates are building some mighty sturdy castles. Sandbox Radio LIVE quarterly performs its own unique brand of audio theater and with each show, more and more people are listening.

But why radio theater? Why bother with a model most have seen fit to abandon?

Law says the project didn’t start as a way to reignite an old fire, she was simply looking for the best possible way to collaborate with the most people from the confines of a limited budget, schedule, and work environment. “The regular model that people have been following to start a theater company wasn’t necessarily what I was interested in taking on at that point,” says Law.

Though Law calls Sandbox Radio LIVE her baby, she freely admits its core elements came from a brainstorm session begun through the Sandbox Artists Collective, a group originally formed out of Freehold Theatre in 2007. “The idea came after a conversation I had with Robin Lynn Smith, one of the founders of the Collective,” says Law.

Both women kept coming back to their mutual love of Radio Theater, knowing full well an audience for live radio entertainment had all but gone the way of the dodo. Yet, they felt, there was a unique quality to Radio Theater seldom found elsewhere–a reductively advantageous magic where less insists in equaling more.

“Radio Theater, that was the only way to do it,” says Law. “We’re saying ‘radio’ now because that is a reference point. It has a more universal meaning even though we’re making if for podcast.  With this model I can have MORE people involved at once instead of saying, ‘We want to produce a play but I can only afford to do a two-hander and I can only afford to rent a space and do it for three weeks and then it’s done and it’s gone.’ And every time now, at least in the model the way it stands, I have at least five writers, 12 actors, six musicians, plus untold other people collaborating. Not only can I afford to do it, but do it with a great many collaborators.”

A quarterly, one-night live performance–what could possibly be the advantage? How can one possibly build an audience? “There was never a question for me regarding the live recording element,” says Law. “That was always going to be there, it was never going to happen in the studio. That’s why I’ve continued to call it theater even though ultimately it is an audio product. It’s probably wise to call it ‘audio’ rather than ‘radio’ theater but at this point because there are so many ways that people access audio content, now that is the language we fall back on.”

Law believes she and the collective have established a show model designed to evolve.  “We only do the one night live performance but since we’re recording it, it continues to live on so it’s not gone in that ephemeral way of most theater. It’s out there for an indefinite period of time as a podcast–it’s reaching a potentially larger audience than we could reach in the theater anyway, even if we could afford a full, standard, resident theatrical run of a month. Podcasting is a fantastic way to get it out there and I don’t ever want stop podcasting. Eventually I would love to reach an audience through genuine radio broadcast.  So, podcasting and broadcasting ultimately is the goal. I want people to be able to tune in to their local NPR for instance, like they do for my favorite show Radio Lab. Which started as a podcast. There’s something about that experience of actually turning on the radio and listening to it, rather than streaming. Having to say ‘It’s on at this time’ and make a special event out of it. I would love to do that.”

In forming the Sandbox Radio ensemble, Law tapped not only the talents of dozens of performers; she also mined the vein of Seattle’s vibrant playwriting community. “What I wanted were unique writers—not like a team of writers on a television show where everybody is working together on something and it all has the same tone,” Law notes. “I wanted Scot Auguston because I wanted Scot Auguston’s voice and I wanted Elizabeth Heffron because I wanted Elizabeth Heffron’s voice and I wanted Paul Mullin’s voice and I wanted Vincent Delaney’s voice and I wanted Lisa Halpern’s voice. Though new to all of them, I don’t think our process has in any way has softened their voices. When people listen to the show–even if they aren’t in the live audience– they will start to recognize the voice of that writer and look forward to hearing it again and again.”

Like most actors in the ensemble, few, if any, Sandbox Radio writers had ever explored producing for radio. “It was ultimately a learning curve for everybody–me, the writers, and the actors. Other than some of the actors having some voice over work experience, that was it. The writers had to teach themselves how to write for radio.”

Lessons in how best to school an ensemble in creating for radio have been all but lost to most modern artists. In radio, one cannot simply show, the visual component of the storytelling process is nonexistent, and that creates some mighty creative workarounds–workarounds that have proven a challenge the Sandbox artists in unforeseen ways.

“As the writers have developed their tools for writing in this way, they’ve started to think more in terms of what will work for sound. Not just, ‘I’m writing my play to be listened to…’ No, they’ve clearly started making choices that are going to take advantage of the fact they can go anywhere they want to with sound.”

Law says she found no finer example in how scripting for radio expands the writer’s creative potential than Lisa Halpern’s Episode 7 contribution, “Excerpts from ‘Flying Through Blue.’”

“I wanted to share excerpts from Lisa’s new stage play–something she is developing not meant radio play at all. In Lisa’s script the character talks about Hawaii, but doesn’t literally go to Hawaii. When we did that sequence in our show we, the listeners, actually go to Hawaii. You hear the little ukulele, you hear the water and the waves and you have that experience of the whale breaching and whole sensation of being in the water. All of that was originally written to happen off-stage. A writer quickly learns they don’t have to worry about A) how to stage it or B) how to film it because the audience’s imagination is going to take care of that and we can go anywhere.”

“I think all of the writers, without exception, have been incredibly flexible,” says Law. “And now I’m getting more and more ruthless about length and economy. They’ve all been fantastic about saying ‘yes’ to that. There is no extra anything, there is no unnecessary anything. It’s really pithy and now I find that when I go to them with notes and say, ‘I need you to trim some fat out of this section or take some air out of that section,’ they’re almost always thinking the exact same thing. It’s like when the camera zooms in, crystallizing the moment down onto that single focused image—that’s the kind of thing that these writers are getting really good at.”

The Sandbox Radio Theater model is an evolving one. A significant change to that model came when admission ceased to be free. “I’m just a firm believer in people getting compensated for their art,” says Law. “Yes, we do it because we love it and we could choose something else to do that would be more lucrative, but that shouldn’t be a reason for not being paid. Charging admission is the first step toward getting people paid, because that produces even the tiniest bit of revenue for me to play with in addition to grants and donations otherwise for the show.”

“I also think it is a sign of respect for the artists that the audience is really willing to make,” says Law. “It says, ‘This is worth it to me. The quality of this is worth it to me.’ You devalue yourself as an artist when you they say, ‘Oh, I’m not going to charge admission.’ It’s not that the quality of the work you’re doing is any less valuable, but a lot of the time I think an audience looks at it that way and considers it as a hobby and we’re doing it just do this for fun. You know what? These people in the Sandbox Artists Collective are professional artists of a certain age and we’re not doing theater in the garage anymore.”

The 9th installment of Sandbox Radio LIVE, “The Naked Truth” hits the air Monday, July 29 at Fremont’s West of Lenin. In the offing will be new audio plays from Seattle playwrights Vincent Delaney and Wayne Rawley, as well as a poem from show regular Charles Leggett, and the company brings you the classic “Casey at the Bat” directed by company member Richard Ziman.

Audiences can look forward to brand-new episodes of the irascible Paul Mullin’s noir-angel serial Markheim. “Things are picking up speed and ramping up with Markheim’s story coming to a head. Up until now there has been a lot of atmospheric stuff, a lot of talking about things and setting up this wonderful, mysterious world and now Paul is about to pull out the stops. Things are about to get interesting and much more dire for Markheim pretty fast.”

After her hilarious debut, Scot Augsustson’s Cousin Katie is back, featuring the inimitable Annette Toutonghi reprising the title role. “We know Scot can be super funny, but he has a wonderful take on local culture and politics. He’s gleefully exploring that with the wonderful Annette Toutoungi. Cousin Katie is our everywoman who is taking us on her adventures in Seattle and seeing things in her own, unique way. In the last episode Katie encountered rockstar librarian Nancy Pearl and weatherman Clif Mass, who made guest appearances as themselves, and this times Katie meets none other than artist/cycling advocate Willie Weir.”

Law says in the grander scheme of things, she’d like Sandbox Radio LIVE to be a draw for out-of-towners. “My goal has always been to grow as much as we could possibly grow outside of Seattle, but also be something that brings people here. That may sound a little romantic, but I see the possibility of somebody who found the podcast coming to Seattle and asking, ‘I wonder if there is a Sandbox Radio podcast being recorded during my visit?’ And it becomes one of their To Do Things while they’re here. That’s one of the reasons I continue to push for content that highlights the local area and why we do the PSAs for local non-profits. It’s all to firmly anchor Sandbox Radio in Seattle. It’s our voice and it’s about people who live here.”