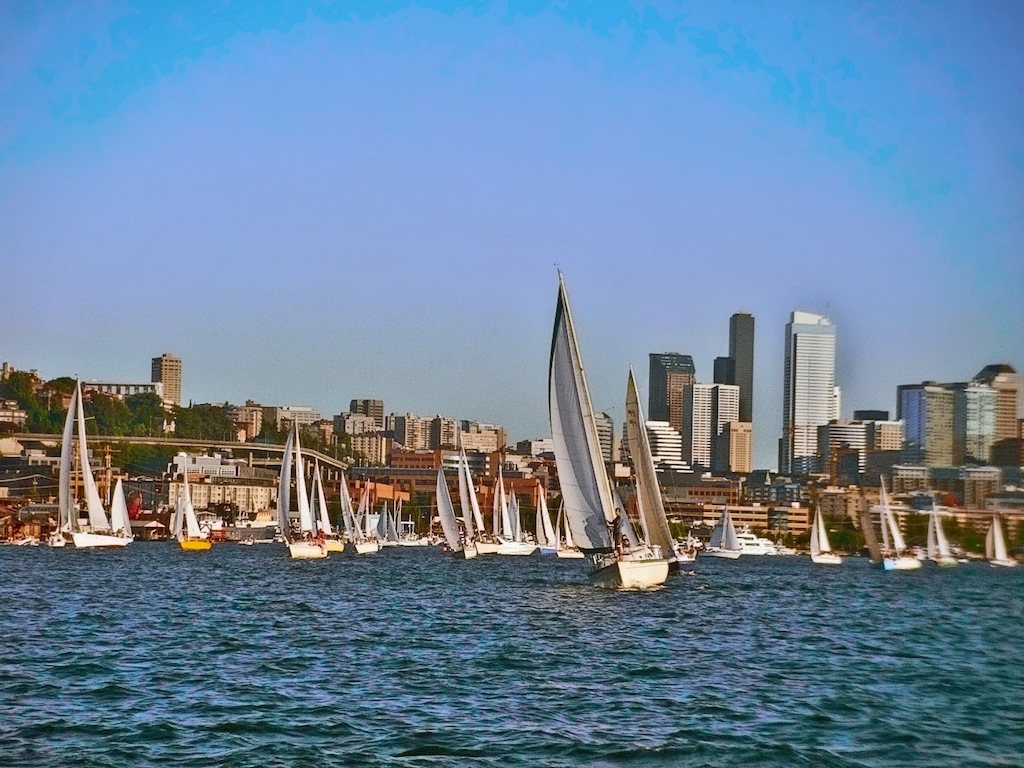 Any boat coming in contact with or substantially frightening any duck must complete 720 degree turn and apologize to duck before continuing. — Ron W. Lloyd

It’s like getting a dog. A world opens. It was there all the time and yet unseen. When Cooper joined my family, I discovered all the cool parks which happen to be off-leash areas. I met more of my neighbors, also out walking at odd hours. I learned regulars and their dog routes, learned breeds, pet food stores, vets—a culture. So it was for me last night in attending my first Duck Dodge. If you already know about it, forgive me. I’ve come late to the party. If not, you can be surprised along with me. The Duck Dodge, our Seattle Duck Dodge sailing race, is on Fodor’s list of top 100 things to do in North America. It’s also been around for almost forty years.

Did you know there’s a Duck Dodge every Tuesday night, May through September? I’ve lived in the city for twenty five years and had never heard of this event before a couple of days ago. Friends asked us to join them on their ’toon (pontoon boat) to watch the duck dodge. I looked it up.

I saw the rules…

Registration procedure: Sail by the committee boat before the start. Tell them your boat name and sail number. Be sure they acknowledge you. That’s it!

… and I saw that scores of sailboats of dozens of classes race on Lake Union (Tenas Chuck). I said yes.

I come from a big sailing family. One uncle designed boats. One raced in Fastnets in his brother’s boats (Rabbit and Red Rooster won races in the sixties.) My dad was the least sailing brother, and of his children I am the least sailing. But the talk, the action around me, summers, was boats. I spent hours and hours in Widgeons as a kid, but seldom at the helm or with comprehension, so don’t ask me to skipper your rig even if I can tell a jib from a spinnaker. My relationship with boats these days consists of gazing at them from buildings or shorelines or hopping the occasional ferry. Until last night.

We boarded The Lounge in the late afternoon of a glorious day. Our major heat wave broken, warm air lingered. First we putted through the Montlake Cut to Garbage Bay where we could drift and eat quiche and spinach salad on Lake Washington. On the way we witnessed the ignominy of water police ordering stupid swimmers out of the traffic lane and back to shore under the Ship Canal Bridge and a scrappy battle between an eagle and a crow. A cool breeze, delicious food, fun company, glinting water, Rainier and Arboretum views, lily pads, Canada Geese, bobbing on the boat. My heart filled. What a city!

And that was before the drama of the Duck Dodge. We returned to Lake Union with some urgency, a tug and barge following us, to the sight of a hundred sails speckling Lake Union, the sparkling downtown as backdrop.

The idea of the Dodge is to be the fastest boat, of course, and not to bang into things, despite the many obstacles. Non-sailing vessels scatter themselves in amongst the racers so the sailors must maneuver around the course (a loop around some nuns, cans and other markers), their competitors, and their spectators. A bit of mayhem. Our captain artfully led us around the reverse route so highlights included a parade of vessels pulling down their spinnakers, readying their jibs, and rounding the southernmost marker not far from MOHAI. We rated their success.

It was a perfect night—sails crossing sunset pink skies and skyscrapers reflecting last light, scads of happy people and the giddiness of red-white-and blue festivities, but one of my friends, unsatisfied, whined at intervals, “I want to see the duck!” According to descriptions, in the middle of the race, floats a regular-sized rubber duckie, the kind Ernie sings about and loves. We discussed whether or not it were myth. She shouted to a couple of passing boaters, “Where’s the duck?” and really confused them. Had the duck been a part of the races early in their history, ignored now? Then we noticed a boat tacking in circles, one of its sailors almost landing in the drink as she swooped a net through the water. Before our eyes, she scooped the net and drew aboard her bounty. We’d witnessed the snagging of the duckie!

An award ceremony follows the sport. We came upon a flotilla of participants, perhaps all winners of various sorts, shortly after drifting past the hotdog vending boat.

The first Duck Dodge, in 1974, announced itself with a beautiful and funny poster featuring the route, the sacred rule of the duck dodge at the head of this piece, and the basic requirements: “Any sailboat. Any Size. Any crew. Any sail (or facsimile) you can fly.” The poster wording is perfect—The Aurora Bridge Mark asserts the vessel must come under any point on the bridge before coming about. Ron Lloyd, Mike Rice and Bruce Gilbert founded the race.

You can be out there. Rent a hot tub boat or a pontoon such as our friends’. Chug around the lake. See our Emerald City looking mighty gem-like. Learn to sail. Get on our city’s water this summer.