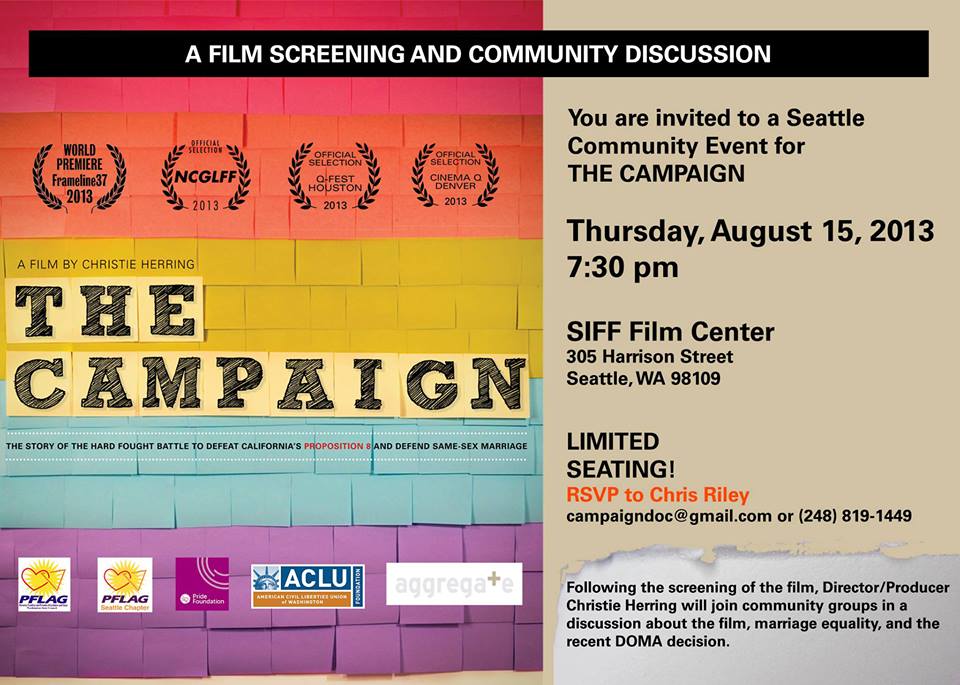 While the fight for marriage equality and equal rights for the LGBT community is far from over, the battles over the last decade have certainly been precedent setting. These clashes of human rights versus the power struggle of religion and outdated morality have changed our country as a whole, creating a ripple effect on the entire nation. It should come as no surprise that filmmakers are now capturing the marriage equality movement’s strides and milestones in the same way they have always captured the struggles and triumphs of other human rights campaigns throughout American history.

The Campaign Documentary comes to audiences here in Seattle–the site of a truly revolutionary year for the marriage equality movement–on Thursday, August 15 at SIFF Film Center. The film takes a comprehensive look at California’s historic “No-on-8” campaign to defend same-sex marriage that unfolded in 2008, situating that battle within a 40-year national story that traces how LGBT Americans have fought for recognition of same-sex relationships since the 1950s. It also demonstrates how Proposition 8 served as a national tipping point for marriage equality, by igniting a new generation LGBT activists and allies who bring unprecedented energy and enthusiasm to one of the most important civil rights issue of our times–same-sex marriage.

The event is free, but there is limited seating. Those interested in attending are encouraged to contact campaigndoc@gmail.com or call Chris Riley at 248.819.1449. For more information, visit the Facebook event page.

Can’t attend on Thursday? The Campaign will begin a national rollout across the public television system on Sunday, August 18 at 11 p.m. with a premiere presentation on KCTS-TV in Seattle.