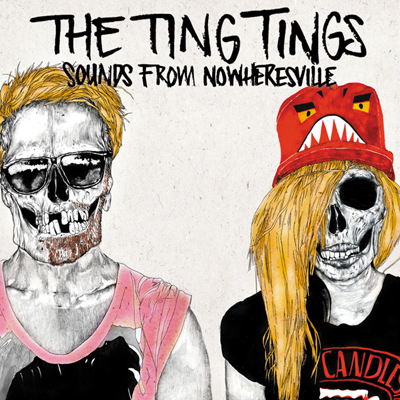 They grew up.  Only reason everybody hot-potatoed these two onto the floor and into the bin, right?  Proactive prescription ain’t so much fun as bullhorned pants-down boingy-boingy (and they were contenders), well what-evah, but aren’t we at the age where we need just a taste of sensibility?  “My husband said he would take care of me,” writes my friend Rufus–in case she has a stroke, that is–“But I have been thinking that bike rides might be more fun than having to ask him to take me to bathroom.”  Aye, men and ladies.

I can’t figure out what they’re calling for in “Give It Back,” simply from listening, but that doesn’t bother me and shouldn’t bother you since it’s the old Exile On Main Street credo (and this album isn’t that, not yet anyway, but travels as a fellow), so if you/I can’t figure out a “high-five” from a “high-life” or “boots” from “roots,” amongst those things that the duo want given back, my best advice is, mystic it.  We don’t get enough mystic (soul)  in our lives.  The lyric sheet will probably resolve it if you want resolution, but I noticed how they copied out the words by hand to make them harder to read.  One last line of defense.

And the longer I wander (the ‘Net and the sidewalk), the more I’m wondering if we all want the same things.  The same general, relatable things, that is.  And most of us, anyway.  “My chubby brother was able to make the most incredible stripper there is in my town fall for him because he used the Cupid Love System (search in Google). I wish I found myself excited for him but I want such a sexy girl to fall in love with me. I am exceptionally jealous. Does that mean I’m a terrible individual?”

That’s a comment from a posting of “Give It Back” to YouTube.  And for a quick parse, this person, identity unknown (okay there’s a name, but names mean little on the ‘Net), is taking advantage of our fear of being alone, to sell us something.  He’s a plant, he’s a shill, with the twist that he’s acting out the part of a lonely person and spiking the punch with jealousy.

And loneliness, as Bob Greene once advised (and I had to painfully give up on him after the scandal but this point stuck with me) is the final obscenity.  We can talk about sex.  We can’t talk about the loneliness that sex is supposed to fix.  Hell, we can’t even talk about friendship.  The other person addressed in “Day To Day” could have been a good friend, with or without “benefits.”  But s/he just kept running.

Soul you get, sure, on “Day To Day” and the cascading “Help,” which warns against addiction in passing but essentially pleads for connection, since “help,” even that self-variety, demands a new connection, something that wasn’t there before (cf. soul’s origins in gospel).

“Hands,” the single left off the album, grooves frankly disco as it calls out to the overworked and under-spiritualized (cf. Bell & James, “”Livin’ it Up (Friday Night).”  For spirit, though, I’m backing the one-two punch up front starting with “Silence,” (lyrically, silence-as-purity in a noisy world, tunefully and paradoxically building to crescendo).

Then track two, best in a bright pack, “Hit Me Down Sonny,” the bell for the next round rings, martial drums roll:  “And you can hit me down Sonny,” testifies Ms. Katie White, “…Sonny won’t get me down/He ain’t got my soul/He ain’t got my anything now…”

She can make it through Sonny, soul torn and frayed but intact; she can shake off disrespect.  She’s no longer a child.  She will survive.