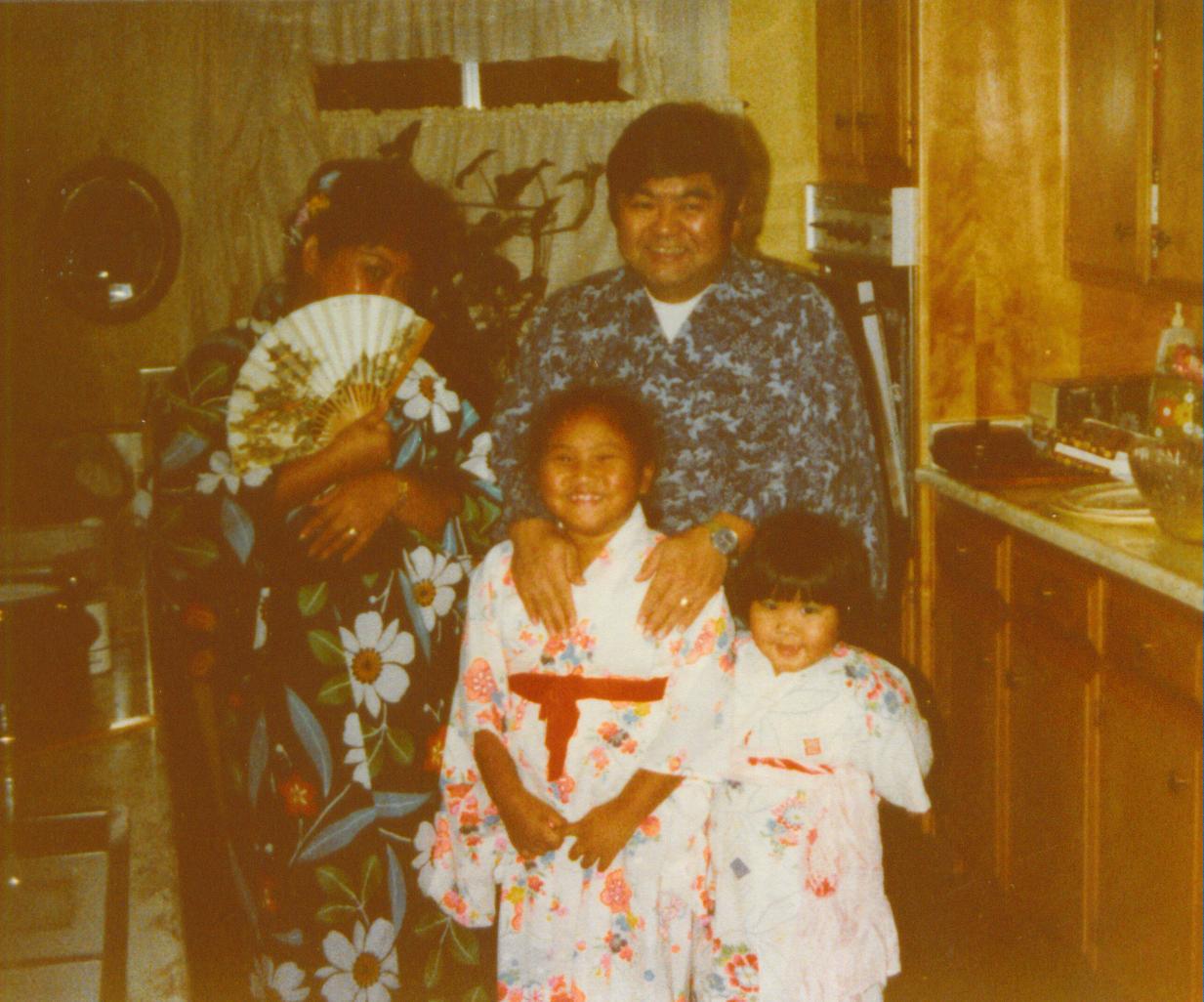 “Your mother is Filipina?” my friend’s mom asks me. She’s Filipina, too. She shakes her head, and smiles, not unkindly. “You look more Japanese.”

My first and last name are Japanese. None of my names are Filipina. But then there’s the color of my skin, which in the Pacific Northwest is “a nice tan.” I know how to make turón, lumpia, and adobo. I can make chicken teriyaki “from scratch,” with a closely guarded family recipe. I could order my way through a Goldilocks’ lunch counter or a teriyaki lunch menu. I went to Buddhist and Catholic services, but grew up to be neither. As a teacher I used to introduce myself to my students as “left half, Japanese, right half, Filipina,” just to show them how strange fractions look on a human body.

Do your parents embrace their “home” cultures equally? What does that look like? Do they try to impart cultural values, food, music equally? My Japanese American father played children’s records in Japanese. And he was able to take us to Japan to meet our relatives there twice, before he died. My Filipina American mother has a much more complicated relationship with her Filipino roots. Immigration, funds, and martial law all played a part in her relationship to her birth country. She’s never been “back” in fifty years. We’ve never met or talked to our family there.

And it’s not just your parents. Do you have larger ethnic or racial communities available to you, close by? Can you go to cultural events for both “sides?” Growing up near Sacramento, I was lucky to attend dinner parties with koto music on the record player and then Nochebuena parties where someone might sing “Dahil Sayo,” a beloved kundiman (love song). We went to ethnic grocery stores for Kikkoman shoyu and Menlo lumpia wrappers. But I don’t know what it would be like to try and raise a child as “mixed” where the resources and community were not available to you.

Widen the circle even further. How much does society accept and celebrate each culture? Even tougher questions arise here. My Japanese American father lived through the incarceration of World War II. Yet somehow, he had the strength and support and family roots to build a house with shoji screens, to name his daughters with Japanese first (not middle) names. My Filipina American mother immigrated to the States when she was ten years old, leaving much of her family in the Philippines behind. She spent much of her American childhood in a military family, moving around many times over the years. They were mistaken for African American in the South, ignored on the East Coast.

Today I identify with both my Japanese and my Filipina roots, but I know much more about my Japanese American history, culture, and community. When I was growing up in the 1980s and 1990s, sushi went from being wildly exotic to wildly popular. I can’t say the same thing for anything Filipino; Filipino Americans are one of the largest Asian American populations in the United States, but American society will tell you so much less about Filipino culture. Who’s accepted, and who’s excluded?—or simply ignored? The questions aren’t any easier now that I am a parent, raising two daughters with a hyphenated last name; they are even more mixed than I am, ethnically.

There is still so much for me to explore, but so many questions to ask in so many different places. Sometimes I want to ask what “being mixed” tells me about the very environment that’s trying to place me.

During the Q&A, I stand up in the audience. My voice is a little shaky, but I’ve got the microphone. “Those of us who are mixed are going to go where we feel welcome.”

This essay was originally published at Discover Nikkei, web project of the Japanese American National Museum (JANM). Readers who register online with the JANM can vote for their favorite essays (including this one) as part of the “Nikkei +: Stories of Mixed Languages, Traditions, Generations and Race” series.