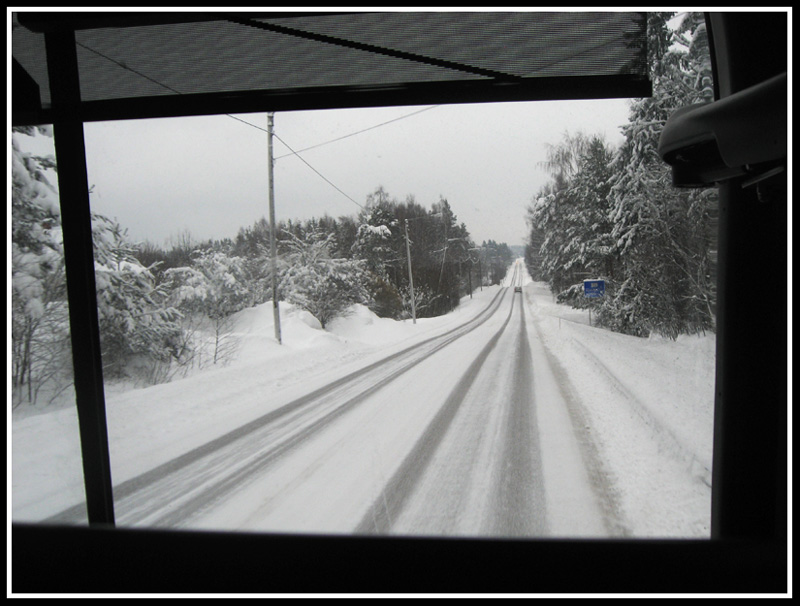 I am listening to a random song, real loud, one hand on the wheel, one keeping time on the stick shift. My hands are not in the correct 10 and 2 position my Pop insisted on. I smile.

The cardboard Christmas tree twirls and twists under the rearview mirror, giving off its fake, but comforting, vanilla scent. I glance at my speedometer and note I am 10 clicks over the speed limit, just fast enough, and just slow enough, to probably slip by any cop radar…like Mom taught me.

Just as the Ramones remind me that, yes indeed, I Want to Be Sedated, I speed by a long bus, its rear lights flashing, the accordion bit in the middle a little askew. I see a bunch of people spread out a few 100 meters down the road. As I pass them thought fragments bounce in my brain: that it is pretty weird, all those people standing there, it being quarter past 9, dark as shit except for one street light, and with the first snow of the season on the verge of raining down.

It takes me another millisecond and I understand the bus has broken down. I glance in the rearview mirror and see someone step into the road, raising their hand to flag a cab. Should I go back and offer some of them a lift? There must be at least 50 people, I can’t help them all. There will be another bus soon, right? The bus driver woulda called it in. Naw, I gotta get home. It had been a long and exhausting day already. And then I remembered my promise. My promise to Mom.

I brake suddenly and put the car in reverse. As I turn my head and look out the back window, I notice that the leather black seats shining a little under the glow of the lonely street light. This pleases me. Mom would be proud that I still keep her car in such good shape.

At this time of night there are few cars along the long stretch of road, the road that takes you out to the island. I stop just ahead of the bush shelter, opening the door to let the warm air merge with the cold of the night, my music still loud, Combichrist screaming at all of us that This Shit Will Fcuk You Up.

I raise my voice over the music to offer a lift to anyone who wants one. There are a couple of elderly-looking people at the front, maybe they want a lift. I try to catch their eyes just as I see a short woman with an equally short dog perk up and step forward. She isn’t shy and opens my passenger door right away, even though she does not get in. It pisses me off (just a little), that she doesn’t ask first about her dog. I don’t want to get dog hair and crap all over my clean car, Mom’s clean car.

All the others just stand there, looking at me, looking at my car, judging me by the music. Some, the younger ones, some corporate looking types, haven’t even noticed I stopped, their white earbuds keeping them occupied, obvious to the world around them, probably posting their current predicament to Facebook.

Another woman, with grey poofy hair and a chunky necklace (are those seashells?), tentatively steps forward and asks where I was going. This is the only road, the only exit, to the island…I guess she wants witnesses.

I grin at her, my best smile, even though it hurts the corners of my mouth, saying I can drop her off at the main bus loop. For whatever reason, that seems to satisfy her and she breaks free of the group to stand next to the other woman.

Neither woman get into the car. We seem to be waiting for something, or someone. Maybe they want a guy to join us, to protect them from me. Even though that person will also be a stranger.

I can’t believe how suspicious everyone is. I am just trying to help. I’m not that scary looking, am I? Sure, I am driving a black, gas guzzling Cadillac, blasting loud angry music, and have a bandanna scarf peppered with skulls on my head. And yes, I have a tattoo, but I am sure they can’t see it in the darkness.

Some in the group shake their heads, others just turn away and button their coats tighter, ignoring me. Something wet settles on my cheek. It is snowing.

A girl, maybe 17 or 18, suddenly runs forward. “Really? Is it okay? I need to get home real quick, my cat is sick, and my Dad said I could only have a pet if I took care of them, no matter what.”

I smile at the kid, I didn’t need her life story. “No problemo. Hop in. Room for one more? Anyone?”

No takers from the crowd. I shrug and tilt my seat forward to let the girl in. The other women have a conversation about who should sit in the front. Dog lady wins. I close my door and pray this act of kindness is being noted accordingly. I skip Combichrist and hope the next track is a good one. Marilyn Manson starts singing about his Beautiful People. I think about all the beautiful, and stupid, people still standing at the bus stop in the cold. Sheesh. What ya gotta do. Like my Mom used to say, statistically you were more likely to get cancer than get picked up by a psycho. And who says psychos are worse than cancer?

As I drive away I ask the women, the three who dared to get in my car, what happened.

The girl, the one whose cat is sick, pipes up first, sitting forward and dropping her arms over the front seat.

“I was sitting there, you know, in the accordion part of the bus, playing a game on my phone, when I heard a weird noise, cause like, I lost my headphones yesterday, so I couldn’t listen to my music. Anyway, there was this sound like gravel kicking up under the tires, but I didn’t really think about it first, I just kept playing my game. Then there was a smell, but I ignored it, most of the busses stink, and then there were people moving from the back of the bus yelling to the driver to stop, that there was smoke and fire! He got on the PA and told everyone to get off the bus and we did. And then, like we were all just standing around outside the bus and I noticed there was a shitload of stuff, oil or something, pouring out under the bus, right where I was sitting. I saw the bus driver with a fire extinguisher so I yelled to everyone to get away as fast as possible, you know, just in case it exploded.” She took a breath, like there was more to say.

“Anyway, nothing exploded. We just had to wait for another bus.”

The woman in the front, the one with the little dog, nods and says she had been in the back of the bus and smelled the smoke before she saw the fire. She pushed the stop button just when everyone else started to get up and yell to the bus driver.

I adjust the rearview mirror to look at the lady with the big bauble necklace. She looks a little more shaken up than the other two and is clutching her purse to her chest. I guessed she is out of her comfort zone.

I skip Marilyn, thinking he is a little hard core for the older women, not that the next song is guaranteed to be better. Still, my playlist was filled with a ton of songs from all over place and time, my music, my Mom’s music, it was always a crapshoot as to what would be next. Eminem, skip, Nirvana, skip, Sisters of Mercy, skip. The first chords of Pink singing Sober hits the speakers. I let it play.

I look down at the little dog on the passenger side floor, thankful he is not yapping, hoping he didn’t need to pee. I remembered I need to pee.

We ride for a few minutes not talking, I skip songs again and Mad World comes on, you know, the version from Donnie Darko, which is way better than the original.

I ask everyone if it is okay to drop them at the bus station.

The bauble lady raises her voice above the music: “The bus station is fine. Thank you, young man, for stopping to pick us up. It is the kindest thing I have experienced for quite some time. I truly appreciate it.”

I blush, glad no one can see in the dark. People often thought I was a guy, especially since the chemo, because I am tall and wear skull bandannas to mask my own bare skull. It was me and Mom’s private joke; she had done the same.

Short dog lady reaches out and touches my hand, the one on the stick shift. “Yes, thank you, I have to get home and take care of my grandchildren, their mother works the night shift this week. I am already late…”

Sick cat kid yells out from the back, “Yeah, thanks dude. It was really cool that you stopped.” She paused, “You got a nice ride.”

Everyone falls into an awkward silence.

We cross the bridge onto the island and as I pull into the bus loop my Mom’s favorite song starts playing, The Rose.

Dog lady, the grandma, opens the door and steps onto the pavement. She bends down and says: “Thank you again, for stopping. As I said, I have to run, my daughter is waiting for me.” As she walks away she calls out, “You have restored my faith in young people!”

I open my door and get out, tilting the seat forward for the kid. She nimbly squeezes past me, thanking me again. Without another word, she darts away, blending quickly into the dark night.

By now Bauble lady has struggled out of the car. Over the roof she asks if I want money for gas. I think again about my Mom, who had met my father one random day when she stopped along a scorching desert highway, taking a chance to give a ride to a complete stranger whose car had broken down.

“No thanks. Just promise me you will pass it on. That’s what my Mom always said, if you can’t help the exact person who helped you, you can always do a random good deed for someone else. And if you think it will shock the people you are trying to help, then you have no choice but to do it.”

She adjusts her big necklace, which is a bit askew after getting out of the car. She touches her poofy hair. “I promise to pass it on, although I cannot promise to shock anyone.” She gives me a little wave and walks away from the car, toward the block of apartments on the other side of the bus loop.

As I get back in the car my bladder contracts from the cold, reminding me that I really need to pee. If I hadn’t stopped, I would have been home by now. I hope I will make it. I don’t want to ruin the leather seats.