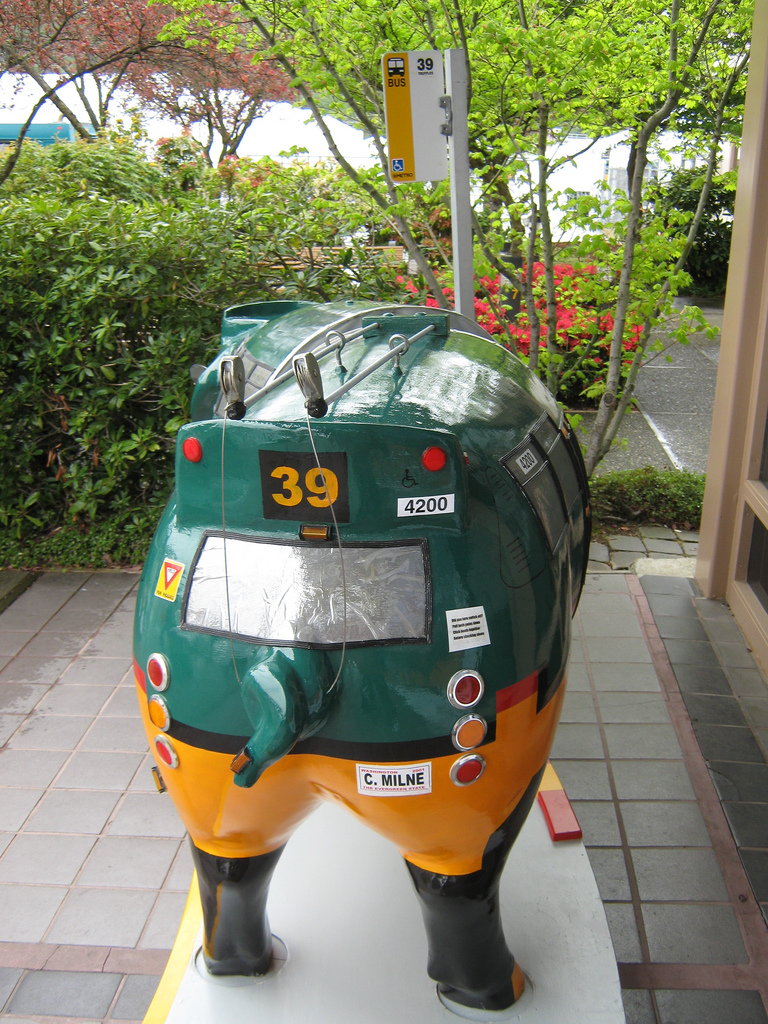 A King County metro bus driver recently drove off his route but his passengers were sympathetic when they heard the reason for the odd move. Apparently the driver didn’t have enough layover time — the time between the end of one route and the beginning of another — to use a bathroom. Nature called, the driver responded, and was applauded by passengers upon his return to the bus.

When Amalgamated Transit Union 587, the Metro drivers and mechanics union, held a rally last week at Westlake Park, a box of Depends adult diapers were on hand because apparently, some drivers just don’t have time for a bathroom run and have taken to wearing diapers on their routes.

The lavatory woes of drivers may be symbolic of how nothing seems to be running smoothly when it comes to King County bus service these days. Perhaps taking a cue from our do-nothing Congress in the other Washington, the state legislature in Olympia, even after two special sessions, opted not to pass a state transportation passage for 2014. That means not only will much needed upkeep on our state highways not be provided this year, but the package would have also allowed the King County electorate the opportunity to vote on a motor vehicle excise tax (10.5% gas tax). The MVET already had support from business and labor leaders and local politicians.

Thanks to the state legislature, King County bus service is set to be cut by 17% in 2014. It’s estimated that 74 routes will be cut entirely and close to 100 face reductions and revisions. King County Executive Dow Constantine wants to alleviate this with his own “Plan B,” a proposal that would avert cuts and provide some money on road maintenance. Constantine’s asking voters to approve $130 million in local taxes which would come from an increase in car tabs — $20 to $60 a year — along with a 0.1% increase in county sales tax. Constantine’s also asking for a fare increase of 25 cents by 2015, which increases the fare to a whopping $2.75, but with a first-time reduced fare of $1.50 for those 200% or lower than the poverty level. The King County executive hopes to have a special ballot measure ready for April 22.

According to Chris Arkills, King County Transportation Policy Advisor, at one time, 20% of the state budget went into transportation. Now it’s closer to 2%. Metro lost a third of its funding back in 1999 when a Tim Eyman initiative passed that froze car tabs at $30 (the courts eventually ruled Eyman’s initiative unconstitutional). Then came the economic downturn of 2008. Arkills noted that it will take almost a decade for transportation funding to get back to the 2007 level.

Plus, there’s always that elephant in the room — Washington state has the most regressive tax system in the country. Historically the fiscal power of the state has always been at the state level. As of Jan. 2013, the richest 1% of the state only pay 2.8% of the taxes, while the poorest citizens pay 16.9% of taxes.

“Since 2007 fares have doubled,” said April Putney of Move King County, a coalition of business leaders and political activists fighting the proposed cuts. “And still no help from Olympia. The 17% cuts will affect 80% of the workers and put 30,000 more cars on the road. I don’t know where they can all go on Third Avenue and the West Seattle Bridge.”

However, the Plan B proposal might not be a slam-dunk with County voters. Groups that are most concerned with transit might not even support the measure. Linda Averill, a shop steward for 587 said, “We’re working on our own Plan C. Dow Constantine has held the county hostage. He was right there for Boeing and every sports stadium proposal.”

The Transit Riders Union, founded in June 2012 to represent bus passengers, hasn’t come out in favor of Plan B either. “We’ve been debating it and we might make a decision at our February monthly meeting,” said Executive Secretary Katie Wilson. “In general, we’re against fares being raised. Our ultimate goal is for people to be able to ride the bus for free.”

When Constantine proposed his plan in November he also referenced a “tentative agreement” forthcoming on a new three-year contract between Metro workers and the county. A few weeks later, the union rejected the offer. “We gave up 52 million three years ago,” said Tony Bell of Amalgamated 587, alluding to the union also expecting Olympia to come up with a transportation package. “In this last contract (offer) we’d be giving up 90 million. And riders will suffer with the cuts.”

The union issued a statement noting, “Hundreds of millions are available for mass transit – if it is made a priority. Instead, county and state elected officials are spending millions of dollars on deluxe highway and road projects (such as the downtown tunnel) and $8.7 billion in tax breaks for Boeing.”

Already some activists are saying they’ll hold their nose and vote for the County’s “Band-Aid” proposals. But the question that looms is whether King County gets the mass transit it deserves without some overhaul of the state’s tax system.