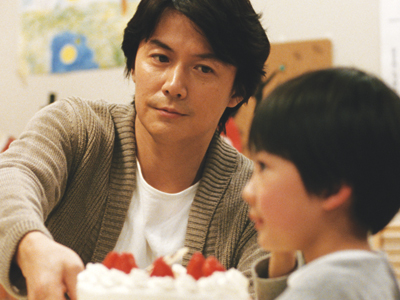 He told me this after a half-hour mostly-monologue. He talked, I listened. He talked so much I’m sure his food got cold.

He thought he had some important advice for me, and maybe he did. I wish I could remember more of what he told me. I was afraid of him, as I am afraid of many strangers. And most strangers aren’t as forthcoming, as voluminous, as he was.

I left him, finally, to finish his taco. I was still afraid of the bright burning in his eyes. But he seemed well-intentioned. He could beatbox better than anyone I’ve ever heard live, although granted, I hadn’t heard anyone beatbox in years, maybe decades. He played me music through his headphones, electronic music he said he’d done himself. I believed him. It was rather good, although I missed the beatboxing.

Then I went across the street, bought a ticket, and saw the first cinematic masterpiece of 2014.

Koreeda Hirokazu’s Like Father, Like Son, playing at the Guild 45th, starts with a myth, occasionally the reality, that two children, in this case both boys, have been switched at birth, at the hospital. Actually, though, he starts from that concept, but not from that point in the story.

No, the director/writer starts with a father, and a mother, and a son. The son is quite young, but he must go into an interview for a private school. This is big-time suspense for the little family, especially since the father, played by well-known Japanese singer Fukuyama Masaharu, has high hopes, and stern standards, for his only son.

The director lets us get to know these people, their wishes and needs and assumptions. Then he springs the surprise on them.

The film shows the other family–larger, not nearly as rich, considered common and disreputable by the first father. He makes the first family uncomfortable, a bit like my friend the beatboxer. But a few deft shots show the second father (Lily Franky) and his strengths. He listens to his children. He plays with them. He even bathes and sometimes shares a bed with them, although he does this out of affection, and no inappropriate contact is ever suggested.

It seems that simple. We see, we feel. But if this is so simple, why do so few other directors succeed? Why do few even try?

So go to the Guild 45th while you still can (the film runs one more week), and savor the mastery. Savor love as a practice, while you’re at it. That’s what the first father has to learn. He may not be the only one.