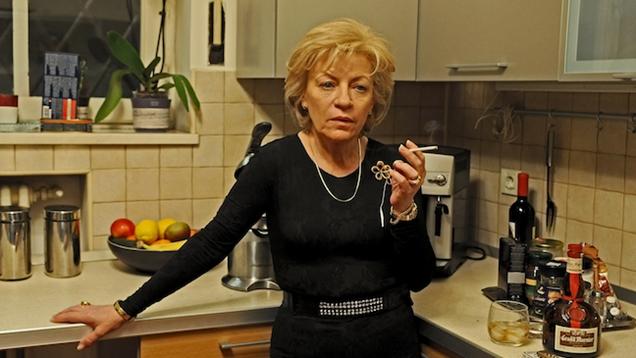 I am no expert on Romanian cinema or Eastern European cinema.  I’ll tell you though, that Călin Peter Netzer’s Child’s Pose, opening this Friday at the Seven Gables, is one of three very-good-to-great films I’ve seen so far this still-short year.  (The other two: Hirokazu Koreeda’s Like Father, Like Son; and Kim Mordaunt’s The Rocket). If this keeps up, we’re in for a banner year cinema-wise.

Two middle-aged women sit discussing their lives. We gradually understand that they are sisters. Cornelia, played by Luminiţa Gheorghiu, reveals herself slowly but steadily. She smokes, shakes out matches, clucks at her sister, and insists, calmly, firmly, that she is the queen of all she surveys and some that she doesn’t survey. Her sister tries to give advice but to little avail. And the viewer understands that this dynamic’s held for their entire lives.

Cornelia bosses her husband around; he seems to have taken to this, over time, with genial black humor. She bosses her son around to the point where her only child doesn’t return her phone calls if he can get away with it. But mother has a key. Mother can drop over whenever she likes, on her son, her daughter-in-law, and the stepchild moving in with both of them.

But this time, things may be a bit different.

The film is mostly Gheorghiu’s show, as befits her character, who’s always gotten what she wants. Andrei Butica’s camera follows her around, flitting to other characters when they try to get a word in edgewise, but always returning to the main event. Under his mildly shaky, ever-more-nervous camera work, Cornelia starts to break down. But she does not break down in any normal way. She maintains her own methodology even in gradual ruin.

The film builds to a predictable sequence, then a quiet moment, and then it is over. This may seem disappointing, but Netzer isn’t dealing with conventional structures, or simplified feelings. He wants us to think about why the story ended the way it did. The film’s only guaranteed to run this one week, so I encourage you to join that pondering while you can.