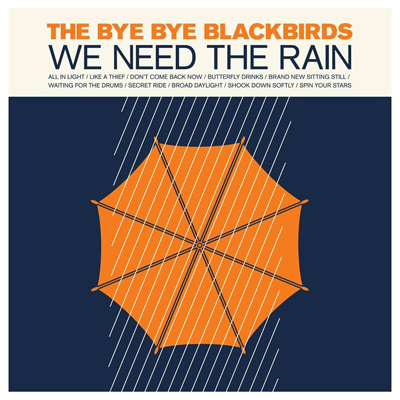 Combining pop smarts with soul passion and a not-quite-hidden gift for intricacy, Tacoma’s own Bradley Skaught brings his new band Bye Bye Blackbirds, to the Rendezvous/Jewelbox on March 13th. He took some questions over email.

Seattle Star: Did you grow up in the Bay Area? If not, where? What are your pivotal childhood memories?

Bradley Skaught: No, actually I grew up in Tacoma, Washington. My memories of growing up in Tacoma are of it being a sort of quiet, sad, wide open place. I swear it was in black and white! I remember riding my bike all over the city — finding hippie coffee shops or biker bars, dusty little bookstores, record stores. It fed my introverted nature — it was sort of the perfect setting for creating your own little world out of personal interests and discoveries.

Seattle Star: What were the first musical acts and songs that you loved, and why? What are your earliest musical memories?

Bradley Skaught: My Dad was a really talented musician. Not a professional, but a really good guitar player and singer, so my earliest musical memories are sitting at his feet and listening to him play. He was really into Jim Croce, John Denver, Gordon Lightfoot, Anne Murray–70s singer/songwriter stuff that had a country or folk aspect to it. A lot of those songs were my early favorites — “Alabama Rain”, “If You Could Read My Mind”, “Back Home Again”, etc. He used to play a really beautiful version of Perry Como’s “And I Love You So” — that one’s always stuck with me. I remember one year for his high school reunion, he and an old classmate got together and learned a whole set of Everly Brothers songs. That really blew my mind, hearing those songs and harmonies. It was also a bit of a family tradition for awhile to go see the Beach Boys at the Puyallup Fair every year, and that made a huge impression.

Seattle Star: What were your favorite record stores, growing up, and why?

Bradley Skaught: There was a place on 6th Ave called House of Records that had a huge 45 section. I fell in love with oldies radio early on, and I would go in there and ask about stuff I’d heard –50s and 60s stuff — and the guys there would tell me about other things to listen to. All in that single format–one song at a time. It was a fun way to learn and discover. Tower Records in Tacoma was amazing, too. That was later on when I started getting into newer stuff or more left field stuff.

Seattle Star: When did you begin to play music? What instruments, and how did you learn to play?

Bradley Skaught: A family friend asked if he could store his drum kit at our house, and my Mom agreed as long as I could play it. So I took drum lessons for awhile from a cool guy in Tacoma named Jim Oglesby. I think I started when I was in the third grade. I started teaching myself guitar later on–in sixth grade, I think. I would find sheet music that showed guitar chord shapes and I’d write down where to put my fingers to make the chords!

Seattle Star: What was your first band, and how far did it get?

Bradley Skaught: It was sort of amazing, but some friends and I put an REM cover band together in middle school that was quite good. Somehow, the guitar player had a Rickenbacker and the bass player looked like Mike Mills and those guys knew that stuff note for note. I mean, exactly. I was the singer, oddly. We also did some Smiths and Velvet Underground songs. We played a talent show and some kind of school assembly at another middle school out in the middle of nowhere. Those kids were not impressed–this was rural Washington in the late 80s/early 90s, so they were all wearing metal shirts and staring at us like they wanted to kill us.

Seattle Star: What bands have you had before Bye Bye Blackbirds, and how far did they get?

Bradley Skaught: Nothing much of note. There was a band called Belle Da Gama that played a handful of shows in the Bay Area and put out a CD. No one liked us much, but we got pretty good by the end, I thought. I learned my craft a bit and learned a lot about finding inspiration and drive in the midst of failure.

Seattle Star: Who are your bandmates, and how did you find them? How do the contribute to the sound?

Bradley Skaught: The current line-up is Lenny Gill on lead guitar, Ian Lee on drums, Aaron Rubin on bass and sometimes KC Bowman doing harmonies, auxiliary guitars, percussion, etc. Some combination of social circles and just putting the word out is how they’ve come on board. How I find them is kind of boring, how I keep them from screaming and running away in terror is the real question! They bring so much it’s hard to narrow it down. They all have diverse backgrounds and years of playing all kinds of stuff, so they bring their musical journeys with them. I don’t generally dictate arrangements beyond the occasional riff or something, so what you hear is very much the result of a collaborative arrangement process. This current version is by far the most rocking line up — heavier sounds, louder, grittier. I’ve been so blessed — every line up has been loaded with talent and imagination and personality. It’s been heaven for a songwriter.

Seattle Star: How has your songwriting evolved over the years?

Bradley Skaught: It’s become more organic, I think. By which I mean that the influences and experiments have been absorbed a bit more and the results feel more like me and less transparently like the sum of my listening. There are a lot of things that are always floating around–I like to combine the rootsier influences with the more modern, artsier influences. I like to hear the old rock’n’roll and country and folk stuff as it meets the power pop, indie rock kinda thing. It’s also more immediate now, lyrically–I filter less, I let the songs reveal themselves less self-consciously. Or, rather, more sub-consciously.

Seattle Star: Which songs on the new album are you most proud of?

Bradley Skaught: Every song has occupied that position at some point, which is a pretty good sign, I think! I have a real love for “Butterfly Drinks” — not only did the writing come together in a way that was unexpected and satisfying, but I felt we really captured it beautifully in the studio, too — it sounds just the way it’s supposed to, I think!

Seattle Star: What lead you to cover a song by Free [“Broad Daylight”]? Are there any other odd favorites/guilty pleasures in your tastes?

Bradley Skaught: It’s funny, that Free song really was sort of a central song for me during the writing and recording of the album. I was going through a phase of listening to their records (which are great) and that song stood out for me. Musically it’s cool, but what really struck me were the lyrics — they’re very beautiful and almost poetic in a way that you don’t expect from Free. I started singing it around the house and it was just a really powerful experience — singing in a really different way, the imagery in the lyrics. I kinda had to fight a bit to get the band willing to play it (let alone record it), but it just kept feeling right to me. And somehow, all the other songs really fell into line musically and thematically because of it. I don’t feel guilty about anything I like listening to. The social currency aspect doesn’t really mean much to me.

Seattle Star: Who outside the band, collaborated with you on this new one? How did those collaborations come about and how did they work?

Bradley Skaught: I had a couple of co-writers. I wrote “Spin Your Stars” with Lindsay Garfield from Paige & The Thousand and Or, The Whale and “Brand New Sitting Still” with Paula Carino from Regular Einstein. In both cases I just had songs with no lyrics or themes and they were feeling stuck. I’d written with Paula before and she’s a songwriter who always brings a really fresh perspective and lyrical direction to her work — I knew it would be something I’d never considered and that great imagery would appear. Lindsay actually sang with the Blackbirds briefly for some shows back in 2011 and I’d become a huge fan of her stuff. She has an amazing gift for writing modern songs that have the weight and feel of old folk music–not in a retro way, but in the way that a Richard Thompson pop song might still have an old English folk feel to it. “Spin Your Stars” needed some of that weight, and she helped steer it that way.

Seattle Star: What were the most challenging aspects of making the record, and how did you surmount the challenges?

Bradley Skaught: It’s funny, when the recording light was on, everything was smooth as silk. Beyond that, it was fraught with a lot of stress and delay. A couple of us were struggling through stretches of unemployment, band members quitting and friendships suffering, health crises, the studio we were using shutting down for renovations, our label went out of business, some heavy personal losses. Life stuff really battered us a lot throughout the writing and recording, but once we actually got a microphone up and hit record, it went really well and it was really inspired. For me, at least, the record became kind of a grounding force–the place to find a center in all the chaos.

Seattle Star: Describe your friendship with the late Scott Miller [leader of Game Theory and the Loud Family]. How did you meet, how did you collaborate, and what was he like as a person?

Bradley Skaught: I was a fan first, but we became really close over the years — our families would spend time together. He was extraordinary — a mind like no other, full of insight and humor. Utterly original. We played some shows together and played for fun on our own, but we didn’t really collaborate much. I’d often send stuff his way for his thoughts or advice. I do have one unfinished song that I’d played for him and he re-wrote the chorus. I think we talked about him writing lyrics for it, but we never followed up. I should finish that one someday.

Seattle Star: What’s in the immediate future for you and the band?

Bradley Skaught: Well, supporting the record, mostly. Trying to play good shows and spread the word however we can. We have this NW tour and a cool show with The Rubinoos coming up in SF. We have a single coming out with Dr. Frank from the Mr. T Experience that’s really fun — we’re his backing band on a couple of his classic songs that were originally recorded as solo performances. I got to play drums on that one, so that was a treat! We have new stuff, too, and I think we’re anxious to start recording that. And I’m always writing.