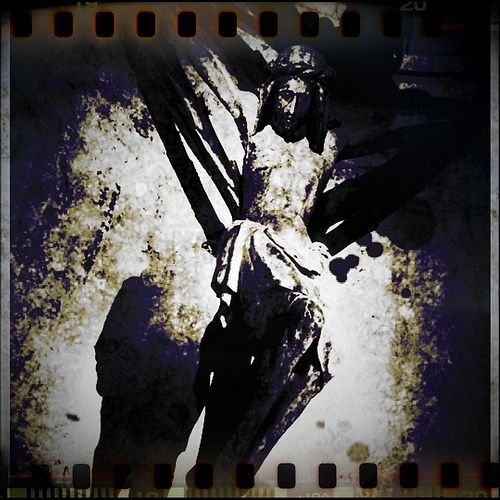 Two years ago today our relationship was reborn, which is why we call it Easter. Or that’s why Karen calls it Easter. I call it Easter because Karen does. It’s not really Easter of course. It’s the Fourth of July. It’s Easter for me and Karen only.

Karen calls it Easter because it’s the anniversary of our first acceptable date. Our first actual date occurred two days earlier, on July 2nd, but it didn’t go well. I tried too hard, according to Karen. I relied heavily on long, well-rehearsed stories and she felt I wasn’t listening. So after that first date—on what Karen (and therefore I) call Good Friday—our relationship died before it even began.

I crucified it, basically, by not listening.

The day after that, she gave me another chance.

This is our second Holy Week together and it has been difficult. But then it should be difficult, Karen reminds me, since it is how we honor the blessing of our relationship, which was given to us despite great odds—and my not listening—to deliver us from our solitary suffering.

Our observance began 47 days ago on May 18th. Our Mardi Gras. I cooked gumbo and did the dishes. Then I gave Karen a long back rub to prepare us for Lent, during which we vowed to deny ourselves the comforts of our relationship. I denied myself by sleeping on the couch, while Karen denied herself by going out almost every night with her friends Monica and Jessica—just like she was forced to do before our relationship brought us together. Sometimes she didn’t come home at all, to give you some idea of her devotion.

The day after Mardi Gras, Ash Wednesday, Karen overslept—because of the Hurricanes I made, I think, and because Ash Wednesday fell on a Monday this year. When she finally woke up, she made a little cross on my forehead with ashes from one of the ashtrays she keeps hidden in the bathroom. She told me (like last year) that I should keep them there all day. I asked (like last year) if she would like me to make a cross of ashes on her forehead, but she said no, because it would make her eyes cross and everyone at her office would laugh at her. (This was prophetic—as Karen often is—since everyone at my office did laugh at me.)

And so our sacrifices continued, with me sleeping on the couch and Karen piously going to bars and movies and dance parties—with a brief reprieve on June 4th, the Feast of St. Peter’s Chair, when Karen allowed me to cook, clean the dishes, mix more Hurricanes, give her another back rub, and sleep next to her, provided I remained on top of the comforter.

The problems didn’t begin until Palm Sunday, which fell on a Friday this year. Palm fronds are hard to find this far north, and although I ordered two dozen from a florist in Honduras in what I thought would be plenty of time, the day came and I didn’t have anything to put down in the foyer of our condo to honor Karen when she arrived home from work. I panicked a little, I admit, and plucked a few broad leaves off Karen’s rubber plant, just so I would have something. I knew Karen would be disappointed because the leaves didn’t extend down the hall, past the bathroom, and into the living room, like last year, and also because the fronds weren’t technically fronds, but leaves I had plucked off her rubber plant. She was extremely disappointed. She questioned my faith. She prayed for me, and for our relationship, and then spent a long time out at a Bhangra party, atoning. I pledged to make the rest of Holy Week go smoothly.

As Maundy Thursday approached, I became anxious. I hadn’t seen much of Karen since the rubber plant incident. She stayed out late on Holy Monday (a Saturday) and Holy Tuesday (last Sunday), and we only spoke for a moment on Holy Wednesday (Monday), when she explained to me that this year she would observe Holy Saturday by sleeping with a guy named Ron she had met at the Bhangra party, because Doug—who was always just sort of there—had in fact left town. Fortunately, I was too involved in the preparations for our last supper for all this to bother me much. I would need bread and wine, of course, and this peppermint balm Karen likes me to wash her feet with.

There was lots to do.

I ordered Middle Eastern food and bought a bottle of Argentinean wine that the clerk at the store recommended. I had everything set up for Karen’s arrival when she called and said she was going to be late. Monica (or maybe Jessica) was having some sort of freak-out over Ryan, and although I barely knew these people, Karen said she would be home as soon as she could. She didn’t come home until after nine, and she didn’t seem as interested in the last supper as she was last year. She was quick with the pita (her body) and wine (her blood), and she wasn’t impressed by the foot washing or the peppermint balm. She didn’t even insist that I reenact Judas’ betrayal by posting a naked picture of myself on my high school reunion’s webpage, like last year. Instead, she said I could betray her by cleaning up and leaving her alone while she went into the bedroom and talked to Ron for a long time.

Good Friday is a solemn day, of course, even when it falls two days before the Fourth of July. As is our newly established custom, we went camping on Karen’s uncle’s farm. I carried the equipment, to signify Karen’s suffering, and all the way into the woods I was supposed to talk non-stop—talk about anything that came into my head—like I had two years ago. Sometimes I got out of breath, from the walking and the talking and the weight, but Karen prompted me to keep talking. Talking had been important enough to sacrifice our relationship, she reminded me, so there was no reason I shouldn’t be able to keep it up all the way to the campsite. After the tent was set up, we built a fire and Karen declared silence—a whole night of silence—to commemorate our relationship, which I had just figuratively killed with my blather.

Karen forgive me, for I know not what I do.

In the morning, I packed up the tent, and Karen led us out of the woods. At home, she took a shower, then went to Ron’s house to endure her final terrible temptation.

Now everything is set. I have hidden colored eggs and chocolate bunnies everywhere—chocolate bunnies that I have kept hidden in the back of the freezer since actual Easter, because it really is impossible to get them at any other time of the year. I saved some Peeps and some plastic grass too, to avoid last year’s fiasco, when I thought it would be cute to observe the resurrection of our relationship with bottle rockets and sparklers. Karen did not think this was cute, so this year I have followed her instructions to the letter, which she has set out in detail in a spiral notebook.

This notebook contains all sorts of things: pictures of us together and smiling, and pictures of me, alone, sleeping. It contains the liturgical calendar for the next four years and instructions for observing the obligatory holidays. These run for pages in Karen’s tiny, precise handwriting. I don’t know where she finds the time.

I thumb through the notebook, forward into the future and backward into the past. The notebook has a picture of Boy George on the cover. It is older than our relationship. Much older.

She will not forsake me.