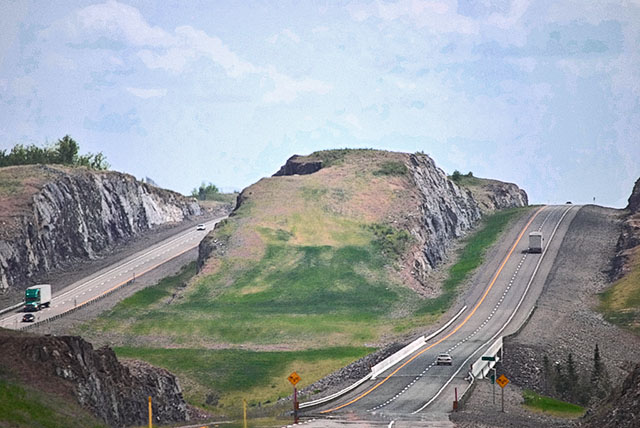 When she’s in the mood to push my buttons, my significant other, the delightful and charming Ms. D, frequently alludes to the questionable timeline concerning my birth date. She derives much mirth from the fact that I was born something less than nine or ten months after my parents wed and hints that this indicates a certain amount of premarital hanky-panky.

Standing on my dignity (’cause it’s higher than the coffee table), my reply is that I have it on good authority that I owe my early entry into the world to Tabusintac Hill. Said hill was once considered to be an abomination of the first water. The Tabusintac, like all hills, had an up and a down. In this case, the up and down were distinguished from each other by a sharp curve at the bottom. The main North/South New Brunswick highway slavishly followed the hill’s contours.

If you were heading north, the road led you into a ravine and you were faced with a steep uphill incline that, in winter, presented a challenge to at least half the vehicles trying to climb it. In true snow country fashion, steep, icy hills were conquered by getting a running start, building up a lot of speed and praying that Mr. Newton’s rules concerning inertia would work in your favour. Headed south, the problem became keeping your car under control so that you didn’t go shooting into the trees when the road curved to the left.

My parents were taking a trip to the Miramachi in December of ’56 and were driving a Pontiac borrowed from one of my father’s friends. My mother was pregnant with a bundle of bad attitude and misery that would turn out to be me.

I assume that my father was driving with that mix of panache and insouciance that my mother tended to describe as reckless behaviour. In any case, as he rounded the corner at the top of the hill, the road was apparently free of snow and ice and there was no reason to slow down. Until the moose stepped out onto the road just ahead of them—

My father and mother disagree on what would have been the best course of action at this point. My mother feels that my father should just have kept on going straight through the moose. My father sensibly points out that this would have resulted in the moose sharing the front seat with them. In any case, the fact is that my father swerved to try and avoid the moose. It wasn’t until my father tried evasive action that he discovered that the road was covered in black ice.

Let’s freeze this tableau for a moment. Remember that no one wore seatbelts in those days. In case of an accident, you were left to carom around inside the car as freely as a politician’s brains rattle around in a gnat’s ass. Also recall that, this being the ’50s, cars were built to be more like traveling living rooms and were really only good at going in straight lines. Braking and handling were definitely considered to be minor considerations. And forget all the modern innovations like dynamic vehicle control, force-limiting seatbelts, airbags and anti-lock brakes. Nope, once you exceeded the safe envelope of the straight and narrow, you were pretty much on your own, safety-wise.

Returning to my parents: Completely out of control, the car’s nose swung to the left. The right rear clouted the moose. The rear bumper (bumpers weren’t integrated into the body, air resistance being a tertiary design consideration) somehow snagged one of the moose’s legs. Bouncing off the snow bank on the left side of the road, the car and all its passengers proceeded down the hill backwards, gathering speed.

When they arrived at the bend at the bottom, the car went straight, leaving the road for the forest and snow and, underneath the snow, the frozen river. What really saved the day was the moose, acting as another bumper as the car ploughed through small saplings and snowdrifts for some 100 feet.

Once all the hoo-ha settled down and my parents realized they were still alive, my father leaned forward and turned off the ignition. They exited the car and were greeted by the smell of moose poop and freshly cut trees. The moose was exceptionally deceased, whether from blunt force injury or fright was never ascertained. They made their way through deep snow to the road and proceeded to wait for about an hour for someone else to come along and rescue them.

On the way into Bathurst, my mother went into labour so instead of going to a garage, the first stop was at the hospital. Husbands weren’t encouraged to stick around for births in those days, so my father went off to see about getting the car hauled out of the bush.

I popped out about twelve hours later, four weeks early and pissed off as hell. I’ve been that way ever since. My folks didn’t finish their trip. There was very little damage to the car, so they turned around and took their bundle of joy home.

And had roast rump of moose for Christmas dinner; they recall it was very tender.