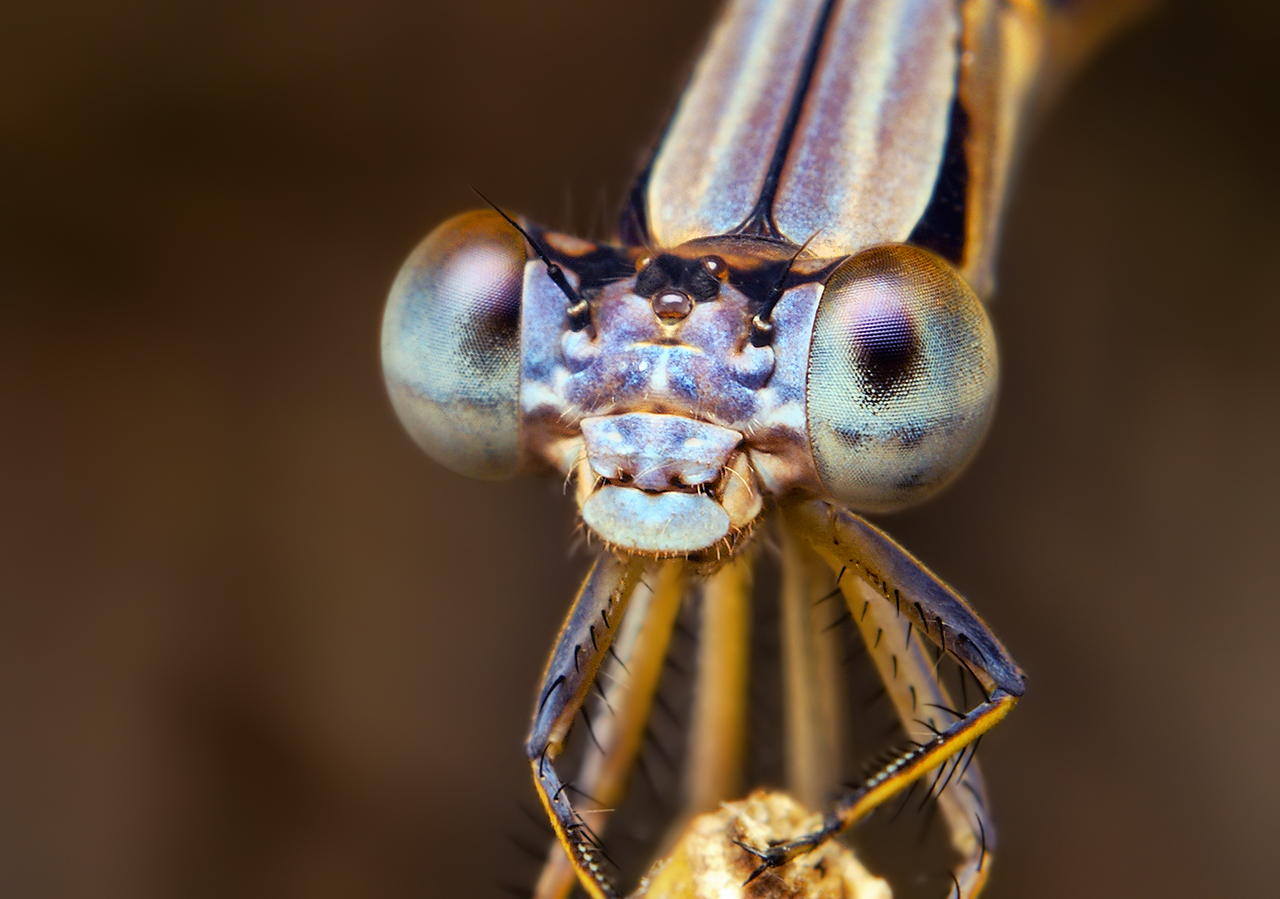 Early morning beams were piercing through the dark night and crawling to umpteen directions faintly.

Feeling still lazy, Vallari opened her eyes, looked around, stretched and got up from the bed. She opened the glass patio door, went into the kitchen, heated water and poured it in to the coffee filter. While the dark, thin coffee was trickling slowly into the bottom dish, she went into the bathroom, held the toothpaste tube in one hand and the brush in the other.

It was in that moment, she saw the bug. It came from nowhere, flew across her face and sat on the mirror in front of her. Cute Vallari thought only for a moment though. She stared at the bug for a second and looked around for something to drive it away. She grabbed the towel and tried to impel the bug to leave the room.

The bug was in no mood to leave the room. Possibly the day dawned for it also in that moment; it was as vibrant as Vallari after her first cup of strong coffee. The bug started hopping around nimbly from mirror to the wall, to the shower curtain, and back to the mirror, like an amateur dancer just turned pro. Apparently, it was a performance of its lifetime!

What’s its problem? Is it trying to provoke me? Um, maybe even laughing at me … in its own way of course, ha, ha in its own language? Vallari thought. It was not funny though. That’s not the thing she would look forward to first thing in the morning. She hadn’t had her first coffee yet. No, this certainly was not amusing to her. “Okay, you do your acrobatics as long as you please and leave,” she told the bug and started brushing her teeth vigorously.

Generally speaking, the houses in America are not built in the innermost corners of some godforsaken woods, not the kind of woods wherein even the crows and ants cannot infiltrate as the saying goes, yet the houses are built airtight, hopefully I might add. I say this because some of them are built with such flimsy materials that a bike can run into the wall and go through easily. At the same time, they are also airtight; forget the fresh air from the green pastures, not even the air from the pine trees in the yard can enter the houses.

It was amusing to Vallari. Anyway, because the houses are built airtight, Vallari got into the habit of opening the patio door and the bedroom windows in the morning as soon she woke up. She would leave them open hoping some fresh air would flow in and close them before she left for work.

Living room had a glass door and a wire mesh. Several of her friends suggested that she should have a wire mesh door installed in her bedroom as well; the mesh would keep the bugs, flies, mosquitoes and other such mean creatures out while bringing fresh cool breeze in, they said. She did not relish the thought. “It’s okay. They’re also living, breathing creatures like any of us, aren’t they? Let them come in like any other relative. They’re not going to move in with me forever, aren’t they? I don’t mind if they use my home as a thoroughfare,” she said, smiling playfully. In reality, it never happened; never mosquitoes or other bugs swarmed the place in a big way and annoyed her. It is only now, and only this one bug; probably it’s gotten lost!

She kept brooding over as she glared at it. Wondered if it had a name? What could it be? It has wings like a butterfly but surely has no other signs to indicate that it is a butterfly. It is dark like a fly but then again a bit too large to be a fly. She heard of big flies but this one is really big!

The bug came into the room as soon as she turned the light on in the bathroom and settled on the mirror. Maybe it is attracted to light! Um, Vallari pondered over all the things she had forgotten after she had left India; she was sad, felt like she was losing her memory! She couldn’t even remember that she was a Telugu woman until and unless someone invited her for Dasara or Deepavali festivities.

She turned her eyes toward the bug again. It was hovering around, staying close to the light. It might go away if the light was turned off, she thought. She turned off the light, waited silently for a couple of minutes as if praying for peace on earth and turned the light on again. It was gone! What a relief! She sighed.

She washed up quickly and went into the kitchen, poured herself a fresh hot cup of coffee and sat down in front of the computer. She was ready for the latest news and chat via the MS window.

She turned on the computer and Lo and behold! The bug was sitting on the wall, as if born to annoy Vallari. She was annoyed of course. “What a …” she cursed the bug; then came to her senses. “Why am I wasting my precious time for this squalid creature,” she chided herself and opened the mail.

The bug must have considered her behavior disrespectful; it flew away. She watched its departure. She was happy and sad at the same time: Happy that it was gone and sad that she might have hurt its feelings!

Entertaining several conflicting emotions thus, she spent an hour on the PC and went into the living room to watch TV. She settled down on the couch, looked up and found the bug on the wire mesh! She was stunned for a second, stared at the bug for a few more seconds and decided to let go of it.

She sat down with her second cup of coffee; her eyes were hovering around. She was amused too in a strange way. She was looking for the bug without thinking. The popular proverb came to her mind, like the lady who worries for the devil, for want of relatives! Then something else occurred to her—maybe it wanted to go out but could not get through the mesh.

Vallari opened the mesh door slightly to make way for the bug to escape.

The bug either did not understand Vallari’s well-meaning intentions or had no intention of leaving the room, or, thought the time was not right yet … anyway, it did not leave the premises.

Now, Vallari had another thought. It was also possible that the bug’s tiny legs got stuck in the wire mesh thereby rendering it incapable of flying. With great hesitation, she brought her index finger close to the bug, barely touching one of its wings.

The bug moved to the left, just about one tenth of one millimeter and made itself comfortable.

Vallari took a deep breath. She was sorry for the bug; she assumed that the poor bug had gotten lost and tried to help. The bug however did not appreciate her concern, or so it seemed. It was in no mood to go out despite Vallari’s efforts to help. That was beyond her comprehension—why this bug would not want to go into the world outside? The whole world was wide open for it to enjoy with the readily available bright light provided by the sun naturally. Why be stuck within these four walls? What kind of pleasure it was getting or seeking from this artificial light in this airtight room? Vallari could not comprehend the bug’s mode of thinking. If the bug had come into the room only for the light, did it not stand to logic that the light outside was thousand times brighter? Hum! We entertain such thoughts about people but come to think of it, probably it is the same with bugs too! All living creatures yield to the temptation by the tiny bit of light that flashes through a small hole, and enter the hole, hoping to harvest the pleasures from the light in abundance.

“Hello! You, empty-head! Here is the path to the outside world; there you will have unconditional, unlimited freedom; go, just go and revel in it. Why do you want to get entangled in the maze of this tiny bit of light,” she said addressing the bug, as she set out to complete her routine.

It was 4:00 in the afternoon by the time Vallari was done with her work in town and returned home. She walked to the windows to close the glass panels before turning the AC on. Involuntarily, her eyes searched for the bug; no, it was not there. With great relief, she turned the AC on and slumped in the couch with a cup of green tea. Involuntarily, her eyes turned toward the patio door again. Ha, the bug was there! Not on the door but on the carpet below, flat on its back. Vallari’s heart twitched. She got up apprehensively, approached the bug and looked at it narrowing her eyes. No doubt, its life had come to an end. She wondered—is this a suicide or accident? Homicide or involuntary manslaughter or rather bugslaughter? Vallari picked it up without further ado and threw it out the door.

She could not stop thinking about it though. Apparently the bug’s role had ended in this world of illusion. After teasing her, annoying her, and pushing her to the edge for nearly four hours, the bug left. Vallari could not decide whether she should thank the bug or tender her apologies to it.

The following day, Vallari woke and was about to open the patio door. She remembered yesterday’s sideshow and stopped. Then opened the door a little and peeked. No sight of bugs.

She sat down in front of the computer with her usual cup of coffee. As she was about to move the mouse, a bug perched on the back of her hand like a pet parrot. She chuckled; poor thing, this bug did not know the fate encountered by another bug the day before. This bug, once again was stuck amidst these four walls, and would never be able to leave this room. Up until now, Vallari thought only people coveted for places and things. But, after watching the behavior of these bugs, she came to believe that it is the same with all the living organisms in this god’s creation when it comes to running after illusions.

Just in that moment, a thousand-watt bulb lit in her head! She decided to get used to the idea; she should learn to live amicably with these bug families, not fight them.

She noticed something else also—the bug visits are limited to a bug a day! And that is strange but livable!