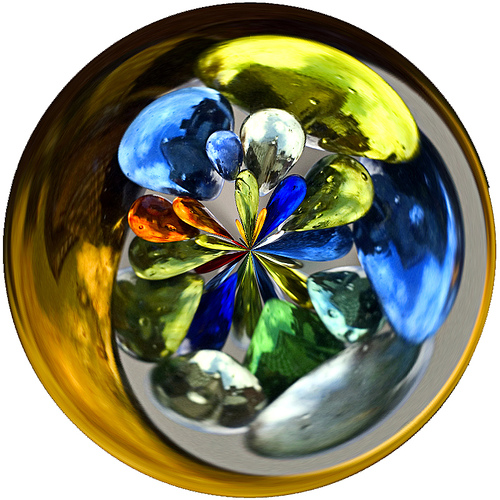 Igor sat bound hand and foot on the hard wooden chair in the darkened room. The taller kidnapper, the one they called Marco, placed two large jars on the big hardwood table in the middle of the room.

The other kidnapper, the one called Lupo sniffed a bit, took a last drag from his failing cigarette, and tossed the butt at Igor. It bounced lightly off his chest, releasing a little puff of harmless sparks.

“This is a little game we like to play sometimes,” said Lupo. Lupo was the only one who ever addressed Igor directly. “This is for that we have a little fun, and that we show you we are not such bad guys, and give you a chance to live.”

Igor listened intently. The bruises on his body throbbed, where they had beaten him, and though he believed none of it, this talk of a chance to live caught his full attention.

Igor looked at the jars on the table. They were directly under the single bare light bulb that lit the room. The bottom of each was full of shiny lumps, white in the jar on the left, black in the jar on the right.

“We are going to put the blindfold back on you, and you will pick one marble from a jar we will give to you at random. If you pick a white marble, you live. And if you pick a black marble,” Lupo smiled darkly, “you die.”

Marco chuckled a little, standing with his huge arms crossed over his chest.

Igor’s heart sank. This was like flipping a coin for his life.

“But there is more!” said Lupo brightly, like he was pitching a kitchen-gadget on the infomercial channel. “Before we blindfold you, we let you mix up the marbles any way you want, just so long as they all end up in the jars.”

“I can redistribute them anyway I like?” asked Igor hollowly.

“Yeah,” said Lupo. “But we shake them up before we let you pick a marble, so it won’t do no good to put all the white ones on top. You gotta play fair.”

Igor did not like the sound of this. It did not make sense. Why would men who had interrogated him for hours, beaten him black and blue, and left him with nothing to eat and just an occasional mouthful of water for days suddenly give him a chance to go free? And why would they do it with such a silly little game? “Move him over.” said Lupo.

Marco unfolded his arms, and dragged Igor’s chair over to the table and positioned him in front of the jars.

As Marco complied, Igor felt the blood surge back into his hands. How long had he been tied? he wondered. He immediately began massaging his wrists. They had been numb before, and now they hurt so suddenly, but he did not care. It felt wonderful to have them free.

“Take your time.” said Lupo. “Think about it carefully.”

Igor stared at the jars, still massaging his hands. This was just simple probability. It wasn’t so hard. He thought about it for a moment, and finally he reached into the left jar and took out a handful of white marbles. He looked at them in his hand. Eight marbles. He dropped all of them into the black jar.

Lupo and Marco had been standing silently, watching him, but now Lupo leaned over to Marco and whispered something. Marco nodded and left the room.

Igor took another handful of the white marbles, and dropped them into the black marble jar. He knew if he was given a jar with only white marbles in it, he was sure to live, and if he was given a jar with a mixture of black and white marbles, at least he still had a chance. He would leave as few marbles as possible in the white jar. In fact, he would just leave one. Lupo had not said that was against the rules. Then he would put all the rest of the marbles in the other jar. One jar of guaranteed life, and one jar of nearly-fifty-fifty chances. Taken together that would give him almost seventy-five percent chances of living… assuming that the kidnappers would be honest about randomly picking a jar for him to draw from.

Igor’s hand stopped as he hovered his fourth handful of white marbles over the black marble jar. How were they going to choose randomly? Would one of them be blindfolded and shuffle the two jars around and then pick one? Certainly not! They would just pick one and call it random. They would never give him the jar with one white marble in it. This was a trick. This was a joke. How could he trust men like this to play fair? He withdrew his hand from the jar, and stared at the marbles.

Lupo snorted, and turned to light another cigarette.

They would not give him the jar with one white marble, they would give him the jar with fifty black marbles and forty-nine white marbles. They would shake the jar up, and he would draw, and his chances of living would be just slightly less than fifty-fifty. What else could he do? After a moment of thought, he dug deep into the black marble jar, and pulled up a handful of mostly black marbles and dropped them into the white jar. If he put twenty-five of each color in each jar then his chances would truly be fifty percent. He would take the randomness out of their hands completely. If he was to face half a grim reaper he would face it with his own luck.

Igor tried to remember exactly how many white marbles he had moved to the black marble jar. The first handful had been eight. The second had been seven. Fifteen. He had not counted the third handful, had he? Now he would have to count them all to be sure he had exactly the right number in each to insure fifty- fifty- Igor stopped again. Fifty fifty wasn’t enough. This was a toss of a coin. Why do with marbles what could be done with a coin? A chill ran down his spine. He had let himself be carried away in the logic of the game, and that was a mistake. He was forgetting who he was dealing with. Cruel evil men. This was better than a coin toss for them because it gave him a glimmer of hope. It let him think he had a chance to save himself, or at least to improve his odds. Surely this was all a lie. The were going to kill him one way or the other, and this was just them having one last laugh at his expense. Both his hands were full with marbles now, and he dropped them all into the right-hand jar. He would not do it. He would just sit here and they- Wait.

Igor thought about his hands. His hands were free. It was the same ropes which had bound his hands that bound him to the chair. His ankles were still tied, but he was not tied to the chair anymore. His hands were completely free, and there was nobody in the room except Lupo.

He glanced up at Lupo, careful not to move his head. Lupo was now pacing patiently up and down the room on the other side of the big table, flicking his cigarette up and down between his teeth. He could see the strap of Lupo’s gun holster over his shoulder, but Lupo’s hands were clenched behind his back. Igor knew he had to take a chance. This wasn’t the kind of chance you could use logic or probability on, this was just the kind of chance you had to take when there was no other way.

Igor gently reached for the right-hand jar and withdrew a single black marble. He rolled it between his fingers and watched Lupo pace, down, and then up, and then down.

“I have a question.” said Igor.

Lupo started, and looked at Igor with raised eyebrows.

Igor threw the marble with all his might. It struck Lupo directly in the eye, and he reeled and stumbled back, uttering a stream of curses punctuated by death threats.

Igor seized the black marble jar and smashed it on the edge of the table. Glass and marbles flew everywhere, and he felt pain in his fingers, but he ignored it. Picking up the largest shard of the jar he toppled sideways off the chair and immediately began slicing franticly at the cords that bound his ankles.

Black and white marbles spread from the tabletop, rolling of the edges and bouncing on the floor, clinking like metal on the bare concrete. Lupo, one hand over his eye, ceased his stream of profanity to call loudly for Marco, and staggered forward, drawing his gun.

The cord frayed and snapped, and Igor’s feet were free.

Truly the white marbles were life. Lupo’s foot trod on a pair of them, and slipped from underneath him. He fell hard, the gun discharging into the air. The sharp noise of the gunshot made the next few seconds seem deathly silent, while Lupo struggled to get up, and Igor scampered forwards on hands and knees, and then the brief silence was shattered by Lupo’s scream as Igor drove the glass shard deep into his outstretched leg.

Both of Lupo’s hands clutched the wound. Where was the gun?

Igor jumped to his feet, unsteadily, as his ankles experienced the same burning that his wrists had just minutes ago. Where was the gun? No time to look for the gun. Marco would be coming.

Igor still had the big shard of the black marble jar in his hand. No sooner had he positioned himself by the door, than Marco entered in a dead run. Without time to think, Igor lunged, putting his full weight behind the shard.

Igor choked on his breath as he watched Marco slump to the ground, he had nearly taken his head off. He felt the warm sticky wet blood splattered all the way up his arm. Marco’s blood. Lupo’s blood. Some of it was his own blood. He could now feel the sharp sting in his hands where he gripped the shard. He had never killed anyone before. He had never even really imagined it.