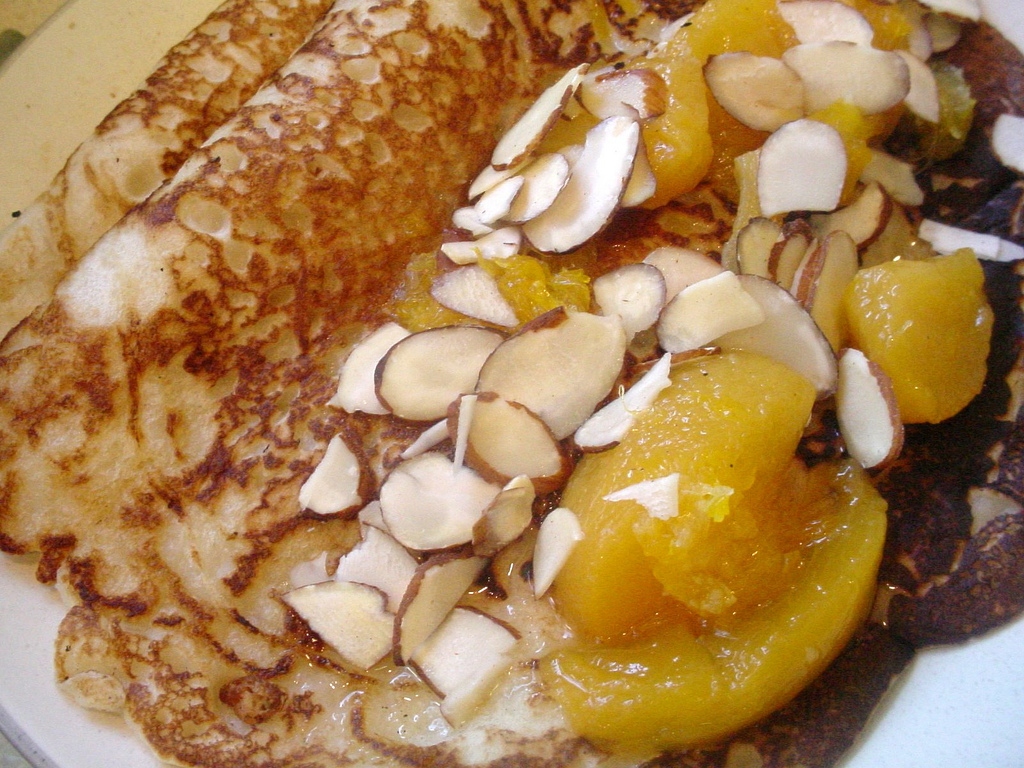 We bring you a bit of unusualness today with this audio reading of Rob Northrup’s short story, from his Dungeons and Dayjobs, a collection of 2d6 stories. A quirky little tale of romance gone wrong, the story also contains five complete recipes.

It’s that kind of story. Enjoy.

The audio of the story follows.

The first dinner I made for Ben was scalloped potatoes with ham. When I was a little girl, my mom taught me how to throw it together without taking time to measure.

I don’t know if it’s my grampa’s Dutch heritage or gramma’s English, but one of them taught my mother the technique, and she taught me.

Ben was sweet. We were in love and he couldn’t find anything wrong with my scalloped potatoes. He’s not a big fan of ham, so he had a couple helpings and just pulled the cubes of ham to the side of his plate.

About three months later he moved in with me. It made more sense than me moving in with him because his apartment was small and grody.

Ben had a little difficulty with the name “Moors and Christians” applied to black beans and rice. I said it’s Spanish, blame them. Probably hundreds of years old. Isn’t it okay to use it if they used it in the first place? Ben said we might be perpetuating stereotypes or something. It was probably privileged white Christian Spaniards who came up with the name. Is it insulting to call someone a Moor nowadays?

Well, anyhow, we had Cuban black beans and rice, which they supposedly call “Moros y Cristianos”. I set out this big ceramic bowl full of the stuff. Ben noted that it was more than the two of us could eat. I said, yeah, because I like it and I want to freeze the leftovers and have it for lunch at work. Skip the salami on wheat for a few days.

I said, “Oh, I don’t know, I just put so much stuff together, I thought with all the vegetables and beans and rice and stuff. I didn’t even think of it.”

Ben said, “You got this out of Vegetarian Times, didn’t you?”

“No,” I said, “but I got the idea there. I saw a version of this in Vegetarian Times and I didn’t want to mess with plantains, so I found a different version on a website.”

Ben said, “All right. Can we please have meat next time?”

“Yes. I’m not turning into a vegetarian. I just thought this seemed like a cool recipe, and I got all this stuff together. I was hoping it would turn out good. I think it did. Will you try some?”

He said, “All right.” He tried some. He didn’t complain about it. I had a lot left to put away in the freezer.

I didn’t bring any exciting dishes to work for a while. For dinner, I made standard meals like baked chicken and rice-a-roni, burgers and chips, stuff like that. Didn’t bother making extra for work. My usual lunch at work is a package of ramen noodles with some extras. I like spicy shrimp flavor.

One morning I told Ben, “Anyways, meat is expensive.” He was on the toilet, reading Harper’s magazine. “What?” I said, “It’s expensive. You can’t hardly get chicken for a buck a pound anymore, or ground beef for a buck and a half a pound. Even if you get a big family pack. It’s not cheap anymore.”

Ben looked up from the magazine. “What are you talking about?”

“When I made black beans and rice. We don’t need to go vegetarian to be smart about eating vegetables once in a while and skipping meat, which happens to be expensive and usually bad for you.”

He went back to the magazine. “Humans have sharp canine teeth for ripping apart meat. Our anatomy has evolved to be omnivores, and it messes up peoples’ stomachs when they eat only vegetables for long periods. We’re not herbivores.”

I made a pot of black beans and rice that night, just so I’d have it for lunch at work again. It was a good batch. I think I added more tomatoes to that one and used two bay leaves instead of one.

Ben took me to Red Lobster one night. That was really nice. I had coconut-lime shrimp. He had lobster.

I liked their biscuits, the kind with cheese baked in them. I tried to make them on my own, looked up a couple different recipes on the web. Never came out with anything very satisfying, but it got me on a real cooking jag. I started making a lot of soups. The thing about soup that appeals to me is that, after you cut everything up and throw it in a pot, you let it simmer for a while and then it’s done. No complicated steps except for stirring it now and then, or sautéing some ingredients at the start.

I tried chicken noodle soups, cream of broccoli and mushroom. That turned out pretty good. I tried different ways to make the cream part. The recipe I started with used flour and milk and butter and a little tarragon, and it wasn’t bad, but it tasted like flour and milk and butter. I wanted something that was more of a creamy cream. I tried soup mixes from the store, trying to reverse engineer them so I could make them from scratch.

Eventually I figured out that the secret ingredient in the yummiest canned soups is MSG. People bitched about Chinese restaurants to the point that they started putting up neon signs that say “No MSG,” but nobody raises a fuss about it in grocery store items like soup, crackers, everything. If you buy something processed and it tastes good, you can bet your ass it has MSG in it.

I got burned out on the cream quest after a while. I had absorbed enough to start improvising soups without recipes, knowing which combinations of vegetables worked, which ones add strong flavor or subtle flavor. I try to be fearless about putting unusual or wrong things together. Don’t tell me what I’m doing is wrong unless you can explain why plum pork is right. If some bastard put ham with pineapple and made it work, then there must be a combination out there with my name on it, waiting to rule the world.

So Ben came home from overtime one night. I didn’t plan it this way, because he usually picks up a sandwich out of the vending machine at work. But this time he came home starving, just as I was finished an experiment called “Untitled #7 with Split Peas and Rice.”

Untitled #7 with Split Peas and Rice

He tried a couple bowls of Untitled #7. It wasn’t as bad as it sounds. I had been experimenting with dried split peas. I like how they disintegrate into the broth and give it a different flavor from the typical, clear chicken broth. I didn’t like the freaky stinking farts that pure split pea soup gave me. So I was minimizing the peas, just enough to give a flavor and thickness to the soup, but not enough to be dangerous. Some carrots, onions, a little ham in there if you got some around. But you’ll survive if you don’t have any.

Ben took a bowl of it and ate in front of the tv, watching CSI: Hoboken. I asked what he thought. He said, “Yeah.”

About a week after Ben mentioned the possibility of moving back in with his friend Stu, I attempted Cheesy Cauliflower and Mushroom Gougère. I made it on a night that Ben was going to be home. I added some damn bacon so it would have meat in it.

The problem with my gougère, which I figured out after four or five more attempts, was that the fucking recipe lists the amount of flour in ounces. I was unaware that there are dry ounces of measurement and liquid ounces. Whichever kind of ounces is marked on my measuring cup, I guarantee it was the wrong kind. To make the proper gougère, you have to use dry ounces. Or better yet, fuck ounces. Use one and a quarter cups of flour. You use the right amount and you get this savory pastry with tomatoey stuff in the center and it’s all good and it rises like a cake or something. You use the liquid ounces and it will only give you half as much flour, and your end product is a ring of pasty eggs, surrounding a jumble of vegetables that bleeds into the eggy part. It’s like a wet, aborted omelette.

The last elaborate meal I bothered making for Ben was the wet, aborted omelette version.

It took me two weeks after Ben left before I felt like making anything more complicated than ramen noodles and tv dinners. I ate dinner watching Law and Order: Special Vegetarians Unit.

Chicken Pot Pie with Death Stars Soup was not something I made for the joy of cooking. Running out of tv dinners motivated me. I also ran out of salami, ramen noodles, peanut butter and cheese. Shoved in the back of a cupboard, I found a package of tiny star pasta. I could never figure out what to use them in until I got this desperate. I had green onions and bean sprouts leftover from stir fry, from back in the days when I could stand to cook. I didn’t have any fucking meat.

I had no parsnips or flavorful vegetables, so I thought about what I could use to give it flavor and thickness. On the door of the freezer was a chicken pot pie that had been waiting there since before Ben moved in. I did not want to eat that chicken pot pie. But I figured after it thawed, the gravy and chicken would give my soup flavor and thickness, and the pie pastry would either thicken the soup some more, or it might break apart into something like dumplings.

The next day after my hangover diminished, I went to see Revenge of the Sith. I knew it would be as lousy as the last two Star Wars movies, but thought it would give me something to despise more than Ben.

At the concession stand, a guy named Larry spilled his drink on my arm. He manages a sporting goods store. Larry has a passing interest in sci-fi, but his real passion is reenacting frontier days as a buckskinner. They call the events Mountain Men Rendezvous. Imagine a biker gang crashing a Civil War reenactment and you get a sense of the atmosphere. He showed me his fringed deerskin pants and matching shirt and the authentic tent he sleeps in at the semi-annual rendezvous. They’re supposed to camp out using no modern amenities.

He made me corn bread on his cast iron skillet over a campfire. The only details that might not have been authentic were the tiny bits of wild grapes and jalapeño he added, because it wasn’t the standard way of making it, and you probably couldn’t find jalapeños in this part of the country two hundred years ago. Larry’s corn bread was moist and sweet and melted in my mouth.

We lived happily ever after.