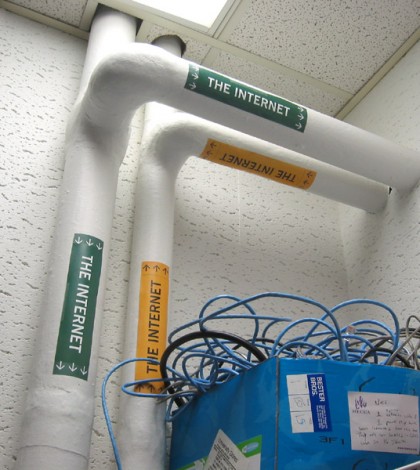 “Network neutrality” is a concept that describes an ideal Internet where service providers (ISPs) would conform to a set of best practices in which Internet traffic is never prioritized and is always delivered consistently end-to-end without any packet restrictions or forced data degradation for any reason. The concept seeks to ensure Internet freedom in which customers will be able to surf any part of the World Wide Web while also ensuring that competition amongst Internet services and content providers are on a level playing field. At the heart of the net neutrality dream is the idea that Internet service providers won’t abuse their power to effectively sandbox their own users into the commercial sites directly related to their financial interests and instead will remain committed to equal access for all. It’s a utopian concept borne out of the idea that when we pay for Internet service, we should get the whole Internet.

In today’s broadband-dominated Internet, there is significantly less choice for the American consumer than back in the Wild West days of the 1990s when consumers used their phone lines to dial in to service providers to get connected. The most popular ISP then was America Online, who kept users in their network as much as possible, combining a host of “premium services” (sexy chat rooms/card games) that were only available to AOL subscribers with limited access to the WWW. They even had a “walled garden” service to screen out adult content (which would be a big no-no with net neutrality). AOL touted their closed system as a protective asset to consumers and many customers signed up for AOL just so they could utilize those AOL-only services. Our nation’s first big ISP thrived by providing the most non-neutral service we will probably ever see and by titillating us with “special” content.

While AOL was enjoying its success and settling into a rigorous schedule of fee increases which they needed to pay for a non-stop, all-out, “we want to own your fucking soul and your offspring everything” marketing campaign, lots of other folks started criticizing this lack of openness for AOL subscribers and soon consumer demand drove lots of other companies to start providing dial-up Internet service with “no frills,” just affordable basic access to any part of the Internet you desired at 56K. A couple of Internet providers even tried to make free Internet work by abandoning the subscriber model and just forcing advertiser content on their users with pop-up ads (another big no-no in net neutrality rules.)

It was a glorious time for the American consumer who could choose to pay the big name for a premium service, pay an affordable rate for a no-frills service, or even surf for free just by surrendering time to click the little X on a pop-up. The free service providers eventually found out that this was not a sustainable business model since most of the freeloaders didn’t want to buy products either but there’s no doubt that this decade of competition and constant social drum banging of “get on board the future today” was really the impetus for mass adoption of the Internet by EVERYONE, and it changed our homes and workplaces forever. It was a crazy, exciting time when people still had time to talk to each other and ask “who is your Internet service provider?” because who you chose made a big difference back then. But eventually our appetite could not be quenched by slow modems and we wanted always on, always available and always fast Internet.

So that’s when we as consumers with our voracious appetites for more videos, more pictures, and much, much more sexy chat, allowed broadband to come along and basically kill all the competition. Instead of consumers reaching out for Internet service providers, we were now pretty much forced to go with whatever company could afford to put a wire in our home. And the only companies that could afford to do it were the ones that were already there, the phone and cable companies, who would like you to believe that they paid for those wires entirely themselves, by the way.

Because the Internet grew out of the telephone companies, it made sense that the industry would be regulated by the Federal Communication Committee (FCC), who started considering whether the broadband carriers should be labeled as “common carriers” (like the phone companies), which would enable them to regulate an open Internet and one where perhaps competition could thrive again. The FCC has passed not one but two net-neutrality “laws” in the last decade which have been challenged in court by big money ISP’s (Comcast and Verizon), and which have been overturned on the grounds that the FCC has not properly proven that they have the right to regulate the industry. How can the one government agency that clearly should have oversight in this area keep losing court cases where they are told they didn’t even have the authority to assert the rules?

The latest defeat for the FCC and net neutrality came this past January when a federal appeals court struck down the FCC’s 2010 “Open Internet Order,” which the FCC claimed “established high-level rules requiring transparency and prohibiting blocking and unreasonable discrimination to protect Internet openness.” President Obama, who touted his support of net neutrality while campaigning for president, appointed lobbyist Tom Wheeler to FCC chairman in November 2013, just two short months before the courts gutted all of the FCC’s previous advancements. Mr. Wheeler is getting set to propose a third set of regulation proposals designed to address this issue. These new proposals will once again direct the FCC to drop the pursuit of labeling the broadband carriers as Type II common carriers, and legalize the practice of selling a special “fast lane” to certain service providers, giving priority over all of rest of the Internet to whichever content providers an ISP can extort for this “special” class of service—a practice that Comcast and Verizon are already doing. Netflix, which accounts for 30% of consumer based Internet traffic in the United States, has signed contracts with both ISPs to receive this fast-lane favoritism, but has been extremely vocal about wishing there were laws that would protect them (and ultimately save their subscribers from increased fees) from this illegitimate toll. Netflix is walking a thin line between victim and precedent-setter as the first company to fork over big money.

So apparently the new FCC idea is to make laws like my mother cooks pasta, just keep throwing a bit at the walls until something sticks. It seems that they are giving up the fight and just trying to determine any area that they actually can regulate. The FCC is clearly tired of creating laws that Big Telco can just ignore or get thrown out in court, as they seem ready to rubber-stamp this new practice of giving certain companies a Disney-esque “Fast Pass” to the American consumer.

So what’s the solution? Well, a lot of smart folks think Municipal Broadband is the solution, Internet for the people by the people, with the connection provided to your home by mandate like a utility company. But the big ISPs are opposed to that, too, and over 20 states (including Washington) have made laws restricting local governments from even trying to get in the game. Most of these laws have been influenced by lobbyist and TV commercials paid for by the big ISPs, who have mostly successfully convinced tax payers that government-owned Internet will be too costly for them.

Representative Anna Eshoo (D-CA) has fought hard on behalf of a better Internet, and has twice proposed the Broadband Conduit Deployment Act, which would simply mandate that we install cable conduits underneath highways when we build them, but that too has yet to be passed by two different congresses. If there’s any one hero in this mess, It’s Rep. Eshoo, who has proven time and again to be the Internet user’s best friend as the author of technology consumer protection laws like CAN-SPAM and the 2009 Internet Freedom Preservation Act. Rep. Eshoo is also a big supporter of the “Federal Communications Commission Process Reform Act of 2013,” which seeks to make the FCC more transparent in its rule making by forcing them to allow more input into their decision making process. She is a fierce and tenacious advocate for all Internet users and it’s probably no coincidence that the Electronic Freedom Frontier has its offices in her district. The folks at EFF have been talking about these issues and advocating for consumers since the creation of the Internet, and their website is a fantastic source of information about this and a host of other issues that if left unchecked could erode the equality of the Internet.

Myself I have a technical problem with the idea of net neutrality, because I can see the benefit of having a service that does some filtering and prioritizing for me. I imagine that current Comcast/Verizon customers who use Netflix would be very happy about this new arrangement although it’s doubtful we’ll see any Facebook memes celebrating this. I don’t actually have a problem with Comcast wanting to invest in a special network for Netflix content delivery if that’s what their customers want. My problem is that there’s really no viable alternative for those of us who don’t even watch Netflix.

What I would like to see is at least a dozen service providers I could choose from. Why not have a bunch that are truly open, with equally weighted routes, and then others where maybe adult content is always filtered out and another that stops spam/viruses/hackers BEFORE they reach your network? Then as a consumer, I could choose my provider based on what was best for my personal consumption. I’d have no problem with certain services doing things differently as long as they were being transparent and I could easily choose to switch my service to a different provider for any reason I wanted. So personally, I’m not as worried about packet prioritization as much as I’m worried about being stuck with it. To me, this issue should be about my choice between companies and not about telling the companies what they should do.

Originally, the net neutrality supporters were really pushing to get the phone and cable companies to open up access to those wires in your home and enable that choice. My biggest concern with the entire debate around net neutrality isn’t that content providers would use the networking technology to tune their service offering to what they deem appropriate, but that these companies are allowed to operate in the vacuum of a monopoly where those decisions affect me because I have no real alternatives. There’s really no economically feasible way for a home consumer to choose a different provider than big cable or big phone. Wireless broadband provider Clearwire massively failed and went out of business last year after failing to get customers excited about their spotty service. This thing will have to be done with copper or fiber in the home.

I’ve seen a lot of Facebook memes this week about “saving the Internet,” which seem to be focused on getting Internet users to contact congress and tell them we’re opposed to Big Money ISPs selling a Fast Pass to our favorite video streaming service that we use every day, and not too many exhorting people to demand more choice, although it is certainly acknowledged that our lack of choice is what has made this issue so pertinent. The folks at SAVEtheINTERNET.com are planning a “Day of Action” for May 15th in D.C. to protest and demand the FCC try again on regulating “real” net neutrality. I hope that the demand for a more diverse range of Internet Service Providers doesn’t get drowned out in the furor over the fast pass.