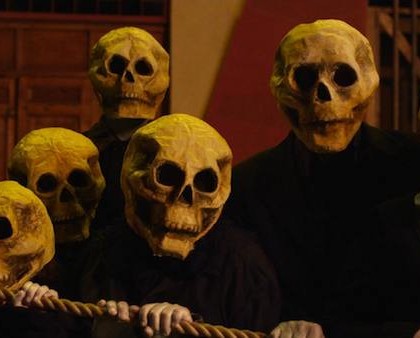 Alejandro Jodorowsky’s The Dance Of Reality, playing now at the Grand Illusion, seems more restrained than earlier Jodorowsky films. Allowing, of course, that the opening sequences show the octogenarian director intoning all the things money is like (Christ comes up), then a bunch of people walking over a bunch of rocks, then one of the rock people falling down in spasm…then a story about a small-town Chilean boy, his impossibly angry father (played by the filmmaker’s own son, Brontis Jodorowsky), and his mother, who sings all of her dialogue.

In other words, business as usual for Alejandro Jodorowsky.

His earlier films El Topo and The Holy Mountain (1970 and 1973 respectively) set new standards for what we English-speakers call the “mindfuck.” Laden with visual, conceptual, and symbolic overkill, they smothered the eyeballs in richess of excess but unfolded methodically, however unconventional the narratives. El Topo began playing midnight screenings at NYC’s Elgin theater, becoming the very first “midnight movie.”

Jodorowsky insisted that this new film be funded through donations, which might have lead to his musing on money as Reality opens. He can make use of computer animation this time around, so, say, a five-pointed star from a young boy’s uniform can scurry up his chest like a manic starfish and plant itself over his mouth. The director’s fascination with cripples and amputees reaches a new height. His obsession with Eastern religion seems to have banked somewhat. The animal violence, a very serious blot on his early work, is hopefully simulated.

Above all, the film is the boy’s story, and the boy’s story is the director’s story, allowing for fantasy. He was really raised by two people he terms “monsters” in interviews. In Reality, his father (Brontis, playing his own grandfather) comes off hung up on power, on machismo, on teaching his son to be a Man, or kill them both trying. Sara, the mother (Pamela Flores), in addition to her operatic range, demonstrates a more delicate and artistic sensibility that the boy shares. Of course, she does bring her seriously-ill husband back to health by urinating on him. Earlier, the father uses urine to short-circuit a radio broadcasting propaganda. To Jodorowsky, anything can seem holy, in Jodorowsky context. (The Sacred Shit may be found in The Holy Mountain.)

The new film confounds, exasperates, infuriates, throws out surprises every reel or so, and like the director’s other major works, may take decades to understand. So bring a friend or two to argue with, but as Groucho Marx once said about Harpo Marx in a thong, get your tickets early.