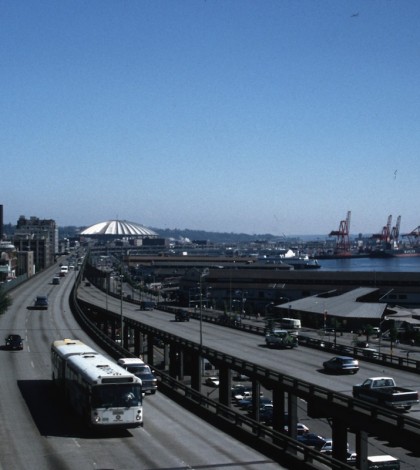 (to Art Chantry, who dismissed the below with the above, and said everything now was “about the same” as everything twenty years ago)

* “The Net” and “The Web,” not to mention “email,” were strange, foreign concepts to most people.

* “The Net” and “The Web” were strange enough that big business, was never going to be interested.

* Daily newspapers were alive, well-funded, and read on paper.

* No Facebook, no Twitter. If you wanted to praise someone or condemn someone, you had to shout it out loud on a street corner, print up flyers and staple them on telephone poles, or write a letter to the editor and hope that the editor published it. (And didn’t edit it to death.)

* No national health care. If you were an American and you got sick and couldn’t pay for treatment, you either rode it out, died, or rode it out and died.

* People listened to music on compact discs. No Napster, no YouTube. You had to steal music the old-fashioned way.

* Speaking of music, vinyl was not coming back, no way, no how. (See above.)

* Tim Eyman would not start doing his shit for another four years.

Sorry, that doesn’t seem “about the same” to me…