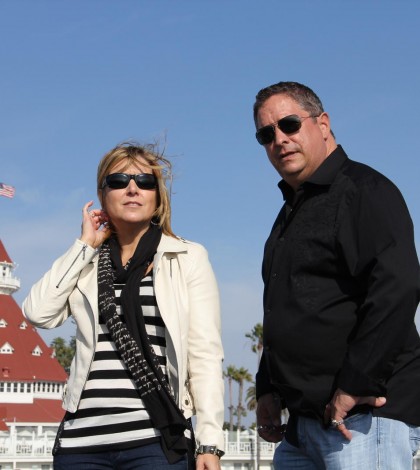 Up-and-coming San Diego act Sometimes Julie was founded not too long ago by singer Monica Sorenson and multi-instrumentalist Rick Walker. Their album Head First is out now. They answered, collectively, some questions over email.

Sometimes Julie: We started out playing as an acoustic duo, playing pretty much anyplace that would have us. Dives, family places, restaurants — you name it. After we created our CD, we decided to put a full band together in order to do justice to our recorded material.

This band is Monica’s first experience playing live, so she can’t really speak to the music scene in her hometown of Denver. Rick played in bands in Chicago in the early 90’s, though. Chicago is a huge blues town, but it also had a very vibrant rock scene at the time with bands such as Material Issue and Smashing Pumpkins leading the way.

Although there are all kinds of rock bands in San Diego ranging from folk-rock to hardcore, the scene seems to be dominated by singer/songwriter-types, having spawned acts like Jewel and Jason Mraz. That contingent is quite strong here and fairly close-knit.

Seattle Star: Which dive karaoke bar did you meet at, and which songs were you each performing that night?  What are your favorite and least-favorite karaoke bars and songs, and why?

Sometimes Julie: We met at Carriage House where Monica was getting all sultry singing “Criminal” by Fiona Apple and Rick was exploring his musical roots singing “Have You Ever Seen the Rain” by CCR. We have a couple of favorite places in San Diego to sing karaoke – although we do so a lot less often these days. We still frequent Carriage House from time to time, and we also like to go to Kaminski’s. We like Carriage House for its laid-back vibe and diverse crowd. Kaminski’s has great food and a dance floor. We love the KJ’s and the owners in both places.

Our least favorite karaoke bars are places where karaoke is not done on a regular basis – like a hotel or resort bar. Nobody sings (except for us, of course) and it can be somewhat depressing.

Seattle Star: What were your initial impressions of each other?

Sometimes Julie: My first impression of Rick as a musician was that he finds absolute joy in writing, arranging and performing. He is so laid back and pretty humble but truly talented. When she first heard him play his guitar and sing she was thrilled, because his style really speaks to her.

What first struck me about Monica was how charismatic a performer she is. She is a ‘star’ that you can’t take your eyes off of when she is up on stage. He was also impressed with the power of her voice and the passion that she pours into her music.

Seattle Star: How do you go about writing songs together?  Has the process changed at all over time?

Sometimes Julie: When we first started writing together, Rick would provide Monica with a completed musical piece, and Monica would add the lyrics and melody. Most recently, though, Monica has been writing lyrics and developing a rough idea of the melody, then Rick and Monica have worked together to develop the accompanying music. However we do it, writing is definitely the most rewarding part of our partnership.

Generally speaking, we just bring ideas to each other and mess around until we have a song. We have amassed enough new material now to record a second CD. We’re excited because while the instruments on Head First were played by Rick and some awesome studio musicians, our second CD will be recorded with our new band members Fred (lead guitar), Andrew (bass) and Andy (drums). We can’t wait!

Seattle Star: What are the most crucial musical influences for each of you, and why?

Sometimes Julie: Part of what makes our music interesting is that our influences are so numerous and varied. Not only that, but while we do share a few, Monica’s and Rick’s influences are quite different. She is influenced by Janis Joplin, Bob Dylan, Natalie Merchant, Lana Del Ray, Sheryl Crow, Coldplay and Dave Matthews. Rick is influenced by The Kinks, Tom Petty, The Beach Boys, Dire Straits, Bruce Springsteen, and The Pixies. There are several musical influences that we do share, though, including The Beatles, CSNY, Bonnie Raitt, Lucinda Williams, and The New Pornographers.

While on some level we are of course a product of our influences, we really don’t set out to sound like anything or anybody when we write our songs. The music that comes out of us is honest and authentic. It is just us.

Seattle Star: How did Monica’s background as a poet raised among musicians influence her lyrics?

Sometimes Julie: In writing poetry you have a sense of meter and rhyme and give attention to the sound of every syllable. It really is very similar to writing lyrics, except without the accompanying melody.  Growing up in a musical household exposed Monica to every kind of music from classical to country, jazz to rock and roll.  Music dominated the landscape in her family and is very much a part of who she is, so when she got the opportunity to put her words to music, it felt very natural.

Seattle Star: What are the band’s favorite places to gig, and why?

Sometimes Julie: We love playing anywhere, but we will always have a fondness for 98 Bottles in San Diego, as that was the venue where we had our CD Release Party, which was also the first gig we played with our full band. We have recently been playing gigs at House of Blues San Diego, which is an exciting, well-known venue and a tremendous
opportunity.

Seattle Star: Where was the album recorded?  What were the most challenging aspects of the recording, and how did you work through the challenges?

Sometimes Julie: Head First was recorded at Bigrock Studios in Escondido, California, produced and engineered by Andy Machin. The recording process was quite an experience – it took so much time and energy!

Although we had been recording demos on our home recording setup for some time, we had a large learning curve to overcome when it came to recording in a professional studio. Rick had spent some time in studios back in the 90’s but things have changed quite a bit since the
‘digital revolution’, so he felt like a rookie again. As for Monica, this was her first experience recording in a studio, so it was all new to her.

Fortunately, in addition to being a talented producer and arranger, Andy Machin is also a great coach and mentor. He always made us feel at ease and expertly coaxed our best performances out of us. He is very collaborative and was great to work with.

Seattle Star: What are the band’s plans for the future?

Sometimes Julie: Our future plans and aspirations are pretty humble, really. We love to perform live and will continue to do so to support Head First and to try out new songs we are working on. We hope to build up our fan base and play some larger venues, such as Belly Up in Solana Beach.

Our first love, though, is writing and recording. As recording is not an inexpensive endeavor, we are focused on generating enough income through live performances, sales/downloads of Head First, and licensing to film and television to fund our next CD.

We have been feverishly writing new songs and have just about enough strong material now to fill a CD. We feel that what we have written recently is our best work yet and are super excited to start recording again!