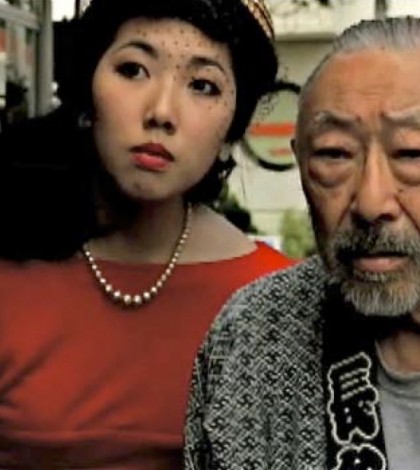 Two spirits are roaming through San Francisco’s Japantown. They’re charged with setting the universe right. One’s a bright-eyed young lady named Lucy Yamaguchi; the other is a 400-year old foul-mouthed, crotchety spirit named Tenshi. She’s new to the job; he should probably have retired a few centuries ago. Will they succeed?

That’s the premise of the comic indie film Infinity and Chashu Ramen, which is coming to the Seattle area in early September. One showing’s set for the Bainbridge Island Art Museum on September 6, and the other is scheduled at the Wing Luke Museum on September 7th. Both screenings will be preceded by a book reading and signing by Hiroshi Kashiwagi, one of the film’s stars (and yes, my uncle). Cast and crew members will be available for Q&A at both screenings, as well. Tickets are now available for both screenings; proceeds from the Bainbridge Island screening will be shared with the Bainbridge Island Japanese American Community (BIJAC). I wanted to find out more behind-the-scenes information from the film’s Sansei writer and producer, Kerwin Berk, and I’m grateful he took the time to answer these questions.

Seattle Star (Tamiko Nimura): Congratulations on the upcoming Seattle premieres! I’m fascinated by how you turned from “fact” (a 20+ year career in journalism) to “fiction” (screenwriting). How did that come about? How has it been so far? Have you noticed any surprising differences or similarities?

Kerwin Berk (KB): Well … as underpaid as journalists are I must admit I do miss the regular paycheck. [smile]

I’m finding there are a lot more similarities than differences between journalism and filmmaking. At the heart of both professions I think we are storytellers. Journalism is much more structured in the way those stories are told — inverted pyramid, lede, quote, nut graph, quote, transition quote, A matter, blah, blah, blah, kicker, -30- etc — but it is storytelling nonetheless. Screenwriting gives you much more latitude to tell your stories, but don’t be fooled. There is still a definite structure in even the most ethereal films.

The actual filmmaking is not unlike putting out a newspaper aka project management — getting a pool of talented people together, making them feel appreciated and personally invested and motivating them to do their best.

KB: The individual vignettes came first. I write all the time, jotting down notes about things I’ve seen, been involved with or been told. The scribblings usually serve no purpose other than to fill notebooks that clutter my shelves at home. The first draft of Infinity & Chashu Ramen was a series of seemingly random occurrences in Japantown that didn’t include the characters of Tenshi or Lucy. After rereading the script I thought it rather cold, that it lacked the kind of heart of Nikkei life I was trying to capture. I began to think about the old Tengu stories: Japanese folklore and mythology about obake and yokai (ghosts and spirits) who interact unseen with humans. Tenshi came first: a spirit from old Japan who mystically followed Japanese abroad as they left the old country. I soon realized he needed a foil and I came up with Lucy, a goodhearted but a little naive woman from the 1940s. Tenshi is a nod to our Japanese cultural past. And, Lucy is a nod to our Japanese American historical past.

Seattle Star: As a writer, I now know it’s sometimes hard to trace artistic influence — but do you have particular figures or people who influence or inspire you the most as an artist?

KB: Jim Jarmusch tells great stories with great characters in a great visual style — and he has great hair. Robert Altman, in his ensemble pieces, is the master of seamlessly interweaving an enormous number of characters, plots and subplots. Terence Malick’s early works are hypnotic. Zhang Yimou, John Woo, John Ford, the kid I met shooting a short film down in an alley in the Mission District, John Ford, Jane Campion, Wim Wenders, Frank Capra … I could go on and on. I think short stories are an underappreciated medium. Don’t roll your eyes but I actually prefer them to novels. And even worse I tend to prefer the classics: Raymond Carver, Flannery O’Connor, Kafka. I reread Salinger’s Nine Stories every couple of years. Don’t hate me.

Seattle Star: I love short stories too! No hating involved. The film follows your production company [Ikeibi Films]’s mission statement of Asian Americans telling our own stories. The result is a multiethnic Asian American cast, which is still pretty rare. How did you audition and cast this film?

KB: A few of the roles were written specifically for actors I knew. Tenshi was written with Hiroshi Kashiwagi in mind. The role of Juanita the waitress was written for Suz Takeda, who did a standup comedy character named Ginger Hashimoto. We had about 30 speaking parts to fill and we did an open casting call over two weekends. The turnout was pretty big and we began to realize that there is enormous number of Asian American actors/actresses in the Bay Area who just don’t get opportunities to perform. We usually had a couple of people come back to read a second time and then we made our decision. Knowing how few roles there are for Asian American actors, I have to say it kind of sucked having to tell actors they didn’t get parts. Some of those who didn’t get parts offered to work as extras, crew members and PAs. And, many times the actors would come out to help even if they weren’t shooting scenes that day.

Seattle Star: Since the film has so many connected narratives (and thus, sets of characters), what were rehearsals like?

KB: Wendy Woo, who played Lucy, and Hiroshi are in virtually every scene so we rehearsed with them the most. Walking is a big theme in the film so we’d go to Japantown walk through the mall and neighborhood reading lines. Lots of stares, quizzical looks from passers-by. It was fun though. We had no money to spend on rehearsal space so most of the actors would come over to my apartment and we’d rehearse individual vignettes. Sometimes one vignette would be rehearsing in the kitchen while the other vignette was in the living room. Everyone brought food — Filipino, Japanese, munchies, scones — it was hard work but really was fun.

Seattle Star: What surprised you about the filming process?

KB: The generosity of the residents and businesses in the neighborhood was incredible. They literally opened their doors for us to film. If they hadn’t there’s no way we could have made the film. Benkyodo is a manju shop that has been making mochi for more than 100 years. The stories really revolve around the shop, so much so that it is virtually a character in the film. The owner, who lives in an apartment above the shop, allowed us to shoot there on Sundays when it’s closed. We’d show up at 6 a.m., he’d would come downstairs in his robe, open the door, give me the keys and say “Just lock up when you’re done.” The owner actually went to high school with one of our actors, Larry Kitagawa. And another actor, Todd Nakagawa, used to work at Benkyodo when he was a teenager over New Year’s, helping to pound mochi. The entire shoot was like that, almost a neighborhood reunion.

Seattle Star: How have audiences reacted to the film? Any favorite encounters or moments from the screenings so far?

KB: Most of our screenings have been community-based. We partner with local nonprofits in areas with Japanese American communities and hold fundraiser screenings for them. We’ve had great turnouts and the audiences have had a great time. We get an incredible amount of support, make new friends and raise money for good causes.

Asian Americans don’t get to see themselves on the big screen much — and when they do we usually play the Emergency Room Nurse, or Policeman No. 2 or Asian Thug No. 3. I think the audiences get a real kick out seeing themselves in a wide variety of roles. There’s some Japanese American “in” jokes that go over really well with our predominantly Nikkei audiences. This isn’t to say that the film is inaccessible to others, however. Most of the story lines show Asian Americans simply as people, with problems and foibles that apply to everyone. I guarantee everyone will find something to relate to in at least one of the vignettes.

Maybe the best story from one of the screenings was during a Q&A session in Little Tokyo in Los Angeles. An audience member asked one of our actors, Ben Arikawa, “Are you originally from Fresno?” Ben said yes. “I think I went on a group trip with you to Europe when we were in college.” They had — 35 years ago. There’s that old saying about how there is “the seven degrees” of separation between people. With Japanese Americans it’s more like one or two degrees.

Seattle Star: Finally, what helps ICR stand out from other exciting Asian American films being made today?

KB: If the man in the moon came to Earth and saw the collective work of Asian American filmmakers he’d probably think we were a pretty unhappy lot. Most of our films seem to put Asian Americans in a situation in which we are facing a host of problems such as stereotypes, racism, sexuality, identity…problems that can safely be said to be rooted in our race. Don’t get me wrong, these are legitimate issues that are important and need to be put on film.

However, these films seem to lack one fundamental thing: the joy we take at being Asian American.

I love being Asian American. I love being Japanese American. Our history, our culture, our world perspective…our food…everything that it entails, I love. And it is this kind of love and joy we take in being ourselves that we tried to capture in Infinity & Chashu Ramen.

Someone once asked me what was the message of our film. I answered “Our message is there is no message…” To me our film is a look at how we live from day to day, free from the shadow of racism, stereotypes or identity issues that dominate so many of the films we make about ourselves. Sure, the characters in ICR have problems but these problems aren’t rooted in race. They are simply problems we as human beings face every day on this planet.