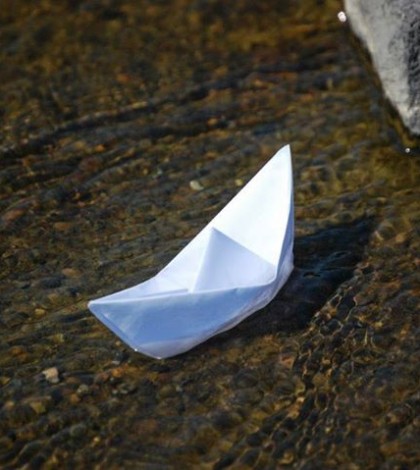 Nineteen of us crouched in the fountain, stacks of origami in our hands, water flowing over our toes, viscous algae underfoot. I blew gently on a six-inch paper boat and made a wish. Our captain, organizer and artist Katie Miller, counted down from three and we launched.

Our launch was the final element of Miller’s installation Bon Voyage! at Method Gallery in Seattle. The project spanned interior and exterior settings; Miller and volunteers spent several weeks folding paper boats amidst video and physical installations. Bon Voyage! was part of the group show Vorfreude, a German word meaning “the joyful anticipation of future pleasures.” Building boats was the joy. The future pleasure was the deployment.

And it truly was a pleasure. Almost childishly so.

Kids get to play in sand, dig in mud, stack blocks, and all for no outcome beyond asking the essential question: “What does this do?” That’s how I felt while dropping my seventy-ish paper boats into the slow-moving water. How far will they go? Will they get stuck on the obstacles? Good interactive art locates the viewer/participant squarely in the immediate moment and Bon Voyage! made our whole team feel gleefully present for a sunny half-hour in the afternoon.

Bon Voyage! is Miller’s fifth iteration of the thousand paper boats concept in seven years. It began in Philadelphia, after a cross-country move, as a meditation on travels. It has since featured in Minnesota and several Seattle-area locations.

I asked Miller what she was wishing for. “Safe journeys,” she replied without hesitation.

I wished for a happy marriage, which I suppose is the same thing.