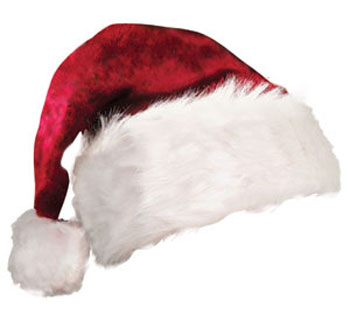 I brought in my new Santa hat to wear after lunch in the roofed-over sandbox area outside Room 5. My plan was to sit children on my lap and do the Santa thing. They enjoyed it last year. Today it was raining pretty hard, and I also really wanted to distract them from getting completely soaked in puddles and in the water-logged sand over in the uncovered sandbox area a wooden ledge away.

Sitting down in the Teacher’s Chair under the plastic roof, I suddenly realized I’d forgotten to bring my makeshift beard in from the car! Improvising on the spot, I tied my white scarf around my head crown to chin, like someone with an injury, then covered the top part with the hat.

So the children start to come, and I lift them one at a time onto my lap. I get a sudden thought to play a joke: Instead of asking them what THEY want for Christmas, I decide to start telling them what I want! *:) So (making it up), I tell the first child I want a new computer and a printer; I tell the second one I want to go to Curacao in the Dutch West Indies (from which exotic locale I know one of our little group has just returned). And then I tell a third child I want a new car. To pad it all out a little more, I aIso add a boat.

After three of these reverse Santa-riffs, which the kids seemed to get a kick out of just as a novelty, I think, “Well that’s enough of that!” and start to do a more conventional Santa routine with the others. One or two say, “You’re not Santa!” so I guess the whole scarf-beard thing wasn’t all that convincing, but most of them come up, I ask his or her name (if I’m Santa, I wouldn’t know) and then ask the other children, “Has so-and-so been a good girl (or boy) this year?” Then on to what they want, and at the end I shout to the “elves on the roof” (just out of sight from us), “A mermaid costume for Sarah!” or whatever.

And while I’m talking to the second child, I think it was, I notice that someone has come up and is standing quietly beside me. I turn my head and see it’s a little fellow who’s around 2½–just the sweetest guy! He’s been shyly trying to get my attention, and now that he as it, he says, “Mr. Max, here’s a boat.” And he hands me a little green plastic one from our sandbox toy bins.