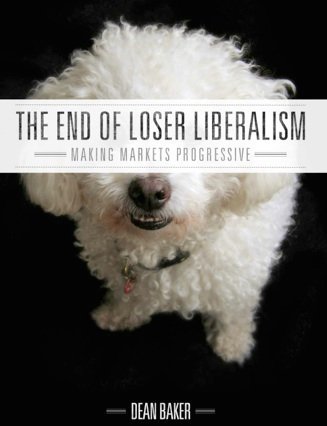 So goes the argument of Dean Baker’s The End of Loser Liberalism, our e-book of the week.

Mr. Baker’s book focuses on the policies put in place that contribute to market inefficiency and the upward redistribution of wealth, such as Clinton’s “high dollar policy” and a general trade policy that pits American manufacturing workers in direct competition with low-paid workers in Mexico, China and other developing countries — a fact of which all political liberals are aware yet afraid to mention.

By releasing The End of Loser Liberalism: Making Markets Progressive under a Creative Commons license and as a free download, Baker walks the walk of one of his key arguments: that copyrights themselves are a form of government intervention in markets that leads to enormous inefficiency, in addition to redistributing income upward. Being fans of the Creative Commons here at the Seattle Star editorial staff, this is an argument we’ve made ourselves many times. And it’s a good show of faith to practice what one preaches, as Mr. Baker has done here.