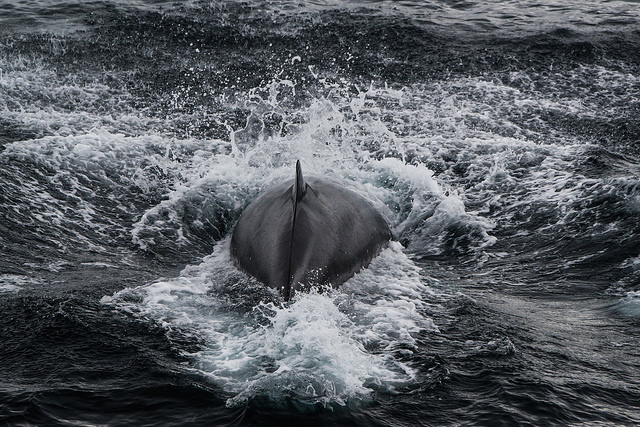 Many of us have heard the haunting call of a whale ‘song,’ but how do the whales themselves hear sound? Similar to the way that animals see color in different ranges of the visible light spectrum, the mechanism by which they hear sound can also vary and in some cases is still not well understood.

The authors of the recently published PLOS ONE article, “Fin Whale Sound Reception Mechanisms: Skull Vibration Enables Low-Frequency Hearing,” investigated how sound interacts with a fin whale’s skull. Specifically they looked at low-frequency sounds such as those used by whales, likely to communicate across long distances. The researchers obtained a whale skull after an unsuccessful attempt to rescue a beached newborn fin whale on Sunset Beach, Orange County, CA. They took a computed tomography (CT) scan of the skull and used it to construct a finite element model, which allowed them to simulate and make predications regarding the mechanism by which fin whales hear sound.

For the majority of animals that have what we normally anatomically identify as ears, the vibration of bones within the ear allows them to hear sounds. Fin whale ears work the same way, and by watching the simulated response of the bones in their model to sound, the authors were able to identify two main mechanisms by which fin whales hear. The first, and most prevalent, is known as the ‘bone conduction mechanism,’ where the vibration of the ear bones is caused by the movement of the skull in reaction to sound. The second mechanism is called the ‘pressure mechanism,’ which describes the way sound directly interacts with the whale ear bones after moving through the water and head tissue. In the figure below, the authors provide a colorful image from their model of the ear bones interacting with sound.

It is important to note that while the authors found that the ‘bone conduction mechanism’ seemed to be the main mechanism for hearing in their model, it may only be applied specifically to fin whales since it was the only skull type that they studied. However since fin whales are a type of baleen whale, distinguished from toothed whales by their baleen which filters food out of the water in place of teeth, it is possible that other baleen whales utilize the ‘bone conduction mechanism’ as well. The physiology of most toothed whales is much different than baleen whales, and a group of ligaments actually separates the ear bones from the rest of the skull making it more difficult for skull vibrations to reach the ear bones.

The fact that fin whales communicate using low-frequency vocalizations also pairs with the authors’ findings. Low-frequency sounds tend to scatter and therefore do not have the ability to apply much direct pressure on ear bones. Therefore the sound’s contact with the skull would account for the majority of how they hear these low-frequency sounds and the ‘pressure mechanism’ would be less impactful. Although a calf skull (see below) was used in this study, the authors note that these mechanisms should not change in the adult skull, as the components of hearing physiology develop at a young age.

How marine animals perceive sound has been a topic of growing discussion as the amount of man-made noise increases in the ocean. Tools such as sonar, often used by the military to detect objects underwater, have been suggested as a cause of some fin whale behavior that has been interpreted as confusion or even a possible cause of beaching. The authors mention that the results of their study may assist policy-making bodies, to protect our ocean’s species from things such as the inadvertent effects of sonar. Keep an ear to the ocean and if you are lucky enough to hear a whale call, you can now listen with a well-informed ear.