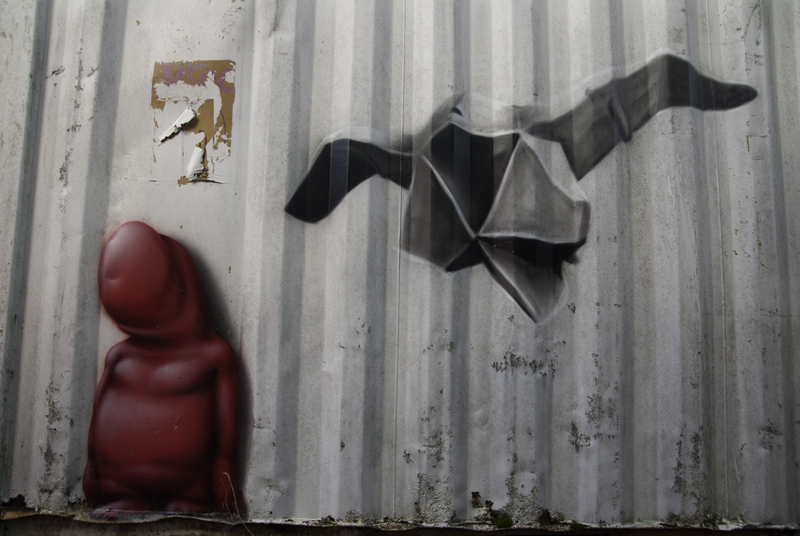 Howard Wallerton’s diamond smile was front and center on the WorldCore simulcast that hung above the bar. This was the moment that Keller had been waiting for. He had parked himself in the chain joint, overdecorated with Jolly Roger kitsch and swimming with too-perky waitstaff because it boasted something like fifty flat-screens. He had endured the bartender’s perpetual can-I-get-you-anything glances just so he could watch this broadcast. Although he otherwise would not have been caught dead watching WorldCore anything, Keller had to admit that Wellerton’s segue from newsy opinion piece on the Lincoln Park Incident was smooth; too smooth. Even the product placement felt like silk on his ears. It tickled in a bad way.

This was Keller’s moment, the one he had been working toward since he dropped out of engineering school back in ’21, and he’d be damned if he was going to watch it as a rebroadcast. Wellerton’s words dripped slowly from his chiseled lips like warm honey.

“And now onto our feature story. Lincoln Park, a small holdout enclave south of Detroit, has seen its fair share of rioting recently. Reportedly, residents hit the streets demanding better food rations, an all too common complaint of the voluntarily disenfranchised. However, when rioters resorted to violence the Michigan Heavy Police contingent was brought in to quell the disturbance. Police believe that terrorist elements may be providing material aid to street rioters, thereby escalating the conflict. Viewers should be aware that some images may not be suitable for all audiences. You may want to pause the broadcast and remove children from the room before watching.”

“Yeah, get on with it,” muttered Keller. The bartender saw his lips moving and seemed to imagine that this meant he wanted another pint. The bartender pointed to the tap, Keller held up the half empty glass of Amerifuzz and mouthed, “Not yet.”

“For more, we go to Jessie Kay, our Midwest correspondent on the scene,” said Wellerton before the screen flickered to show a slender newsy-model hidden within an oversized urban camouflage flak vest. The word “PRESS” emblazoned in highly reflective white letters across the chest piece negated any concealing effect the printed pattern might have should reporter Kay find herself in the midst of a firefight. Keller grinned in recollection. Those letters had represented a particularly nasty problem.

Her über-platinum hair, almost as reflective as the lettering on her chest, was pressed over her delicate ears by the riot helmet balanced atop her tiny head. Keller wondered for a moment at the woman’s age; impossible to estimate simply by appearance, given that there appeared to be more applied medical whizbangery in the thirty-six square centimeters of that face than had ever been offered to the denizens of Lincoln Park. This was a person who had been fundamentally altered for ratings. Something about her appearance momentarily moved Keller. It was an uncomfortable sensation, simultaneous affection and loathing, like watching his mother leave on a date after her divorce.

“Bill, I’m standing behind Michigan Heavy Police barricades, now located within Detroit proper.” High-lift armored troop transport vehicles made up the backdrop for the on-site simulcast. The broadcast could have been pitched from anywhere.

“Earlier today, police conducted an organized retreat when Lincoln Park rioters were surprisingly assisted by a swarm of unmanned aerial drones.” Keller wondered whether even the woman’s voice had been altered. If anything could make this beer worse, it was the saccharine sound coming from her lips.

“With me here is the Heavy Battalion Incident Commander, Marc Creech. Commander Creech, can you tell our viewers what happened today and why your men were forced to pull back?”

Creech held up something in his hand. The camera zoomed in on a device, and Keller got to see his creation for the first time in the wild. “This morning we started to notice these drones collecting above Lincoln Park. For most of the morning they would pop up above riot lines. We believed they were just performing reconnaissance for riot organizers.”

The bartender, for the first time that night, seemed interested in the broadcast and moved down the counter to catch the WorldCore story. “Why’s he wrong?” he asked Keller, seemingly making small talk.

Commander Creech went on barking into the microphone, “At about 15:37 this afternoon we were surprised by a swarm of these little devices.” The screen switched to some footage recorded earlier in the day. What had to be a hundred thousand mechanical contraptions darkened the hazy Michigan air above a line of decaying brick buildings. Below the swarm, rioters began to pull back. The Michigan Heavy Police began to press their advantage. As the riot police moved forward, a contingent of the drone swarm broke from the cloud above, diving at the armored men. Riot shields were raised and batons were momentarily brandished like baseball bats, but the mechanical assault stopped just short of engaging the troops. Then a multi-colored dayglow eruption burst from the line of drones, liberally coating the first and second row of police troops in rainbow goo.

“These drones are equipped with an aerosol can which our forensics team describes as custom cocktail of fast setting epoxy foam. As you can see, the drone swarm fires on police with the foam, pinning our forces in place. I’ve still got men trapped in Lincoln Park who cannot move.”

“That sounds…bad, Commander Creech. Why haven’t your men been able to lock down the area and disable the drones? Isn’t it true you have an electronic warfare contingent on site?” The camera again focused on the little device with the contra-rotating top rotor in Commander Creech’s hand. The container of foam was now plainly visible. Keller noticed that whoever made it used their own nozzle.

“We’re still awaiting results from the FBI lab, but it appears that these devices are semi-autonomous. Independently they’re almost worthless, but together they have a swarm-intelligence that allows them to to operate for extended periods without additional instructions. They can recharge their batteries from environmental sources, which makes them a persistent threat. The electronic warfare unit on site with us today has tried everything short of an electromagnetic discharge to bring these things down. They are too fast to shoot down with conventional firearms and they never get close enough for police units to grab or hit. This one had a faulty spray nozzle. It saturated its own motor before it seized.”

Keller was chuckling to himself, and the bartender was paying attention. He asked Keller, “What’s so funny?” The question soured Keller’s mirth just a tad.

“One out of one hundred-thousand! That’s pretty good quality control for a DIY project, don’t you think?” Keller answered, letting a little pride leak into his response.

“This evening our electronic warfare unit was able to locate where these things originate. The devices are part of a do-it-yourself kit that was made freely available on web sites some time ago. The Gumball drones make use of easily available electronics components; a Chinese manufactured toy actually, a microprocessor, and some freely available code. We believe they are using a rudimentary object-recognition algorithm which is keyed to a variety of camouflage patterns,” said the Commander.

“Wow, that’s pretty keen,” said the bartender. “I suppose who ever made that thing is in for some grief.”

“Yeah,” Keller agreed. “Probably the federal level, water board, black box sort if you ask me.” Keller figured he could not lay it on too thick. He had already broken discipline just coming into this place, and he could not tell whether this stranger suspected something or was just being nosey. Keller had long ago internalized a state of self-protective paranoia. It was always better to appear just another cog than signal where his passions lay.

The incident commander continued, “We have an arrest warrant for the creators of this device. A reward is being offered for information leading to the arrest and prosecution of the perpetrators. The FBI has opened a toll-free hotline where you can call in any information you might have regarding the identity of these terrorists.”

“You suspect there’s more than one person responsible for the Gumball drones?” asked Kay.

“Yes. Right now we’re focusing our attention on known terrorist organizations that possess the manpower to quickly develop such a capable swarm intelligence. The Bureau has agreed to assist us in our search. The wide distribution and availability of the plans to make this drone system means that Homeland will likely spearhead future investigations.”

“Have you been able to remove the plans and software from the websites you mentioned?” Keller knew the answer to this one already, but watching Creech’s shoulders tense in frustration made his response more enjoyable to watch.

“No. We’ve been able to remove some repostings from networks maintained by commercial entities. However, we’ve discovered that the drone plans are widely available via an illegal anonymous offline file-sharing and communications system known as PirateBox10,” said Creech. “I’d like to take a moment to remind citizens that manufacture and distribution of these network devices is also illegal and people caught with pirate networks will be prosecuted.”

“Thank you, Commander Creech. Back to WorldCore and you Bill,” said Jessie Kay. Keller was no longer paying attention. The Gumball drones were doing everything he hoped they might. Better, the toy he had used as a chassis for the robot had just come down another twenty percent in price. Anyone could build one, and many probably would.

The bartender snatched a glass from the counter under the screen and turned around to the tap. He smiled while pulling a pint of thick amber liquid that looked remarkably tasty compared to the swill that had died unlamented in the bottom of Keller’s glass.

“You know,” said the bartender, sliding the nutty smelling foam-topped pint down the counter where it came to rest just to Keller’s right, “I sure hope they find those terrorists.”

Keller looked up at the man standing behind the bar. The bartender pointed to the glossy molded likeness of a Jolly Roger on the tap he had just pulled, and winked.