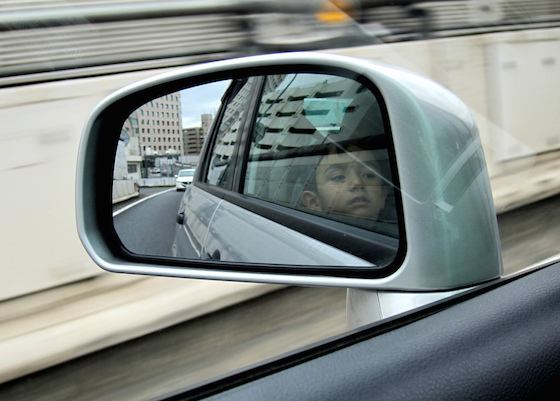 It was Mother’s Day in Durham, North Carolina, and my husband, Duncan, was out of town. I was three months pregnant, pretty queasy and exhausted, so my sons and I decided to have a picnic in the Duke Gardens. I just wanted to lie in the grass. But as we headed out, we passed a group of protestors—a dozen white adults and children—standing on the sidewalk, holding huge signs, written in all caps: “FAGS SIN THEN DIE,” “FAGS ARE LAWLESS,” and “2 GAY RIGHTS: AIDS & HELL.” I’d heard that a group from godhatesfags.com, also known as the Westboro Baptist Church, was in town. They’d come all the way from Topeka, Kansas, to protest a high school theater production of The Laramie Project, a play about the murder of Matthew Shepard, a gay college student.

At ten, my son Joseph loved controversy. He begged me to turn the car around and go back. “Mom, please, I want to yell something at them. We have to!” His foot tapped eagerly on the car floor behind me.

I wasn’t sure I was really up for a big confrontation. “Let’s just go to the Gardens,” I said. “It’s Mother’s Day, and I don’t feel that great.”

“Mom, we have to go back,” Joseph persisted.

“Okay,” I said and pulled into a gas station to turn around. I swiveled my head to look at Joseph and Ben, my seven-year-old, in the backseat. “We don’t want to be crazy like they are,” I said. “We want them to know that we disagree, but let’s say something calm and positive. God loves everyone—how about that?”

“Okay, that’s good,” Joseph said, “Now drive slowly when we get up to them.” He rubbed his hands together in anticipation.

I guess we should have figured that “God loves everyone” were fighting words to the members of Godhatesfags.com, but we hadn’t thought that far. As soon as Joseph yelled, “God loves everyone!” in his bold, stage voice from the back seat of our battered station wagon, a woman hurled back, “God does NOT love everyone!” And then, shaking her finger, she addressed me: “Stop lying to your child!”

My blood boiled. “Stop lying to your child!” I screamed, “Read the Bible!” “You read the Bible,” she yelled back at me.

Joseph ended our brief interaction by shouting at the woman, as we drove out of range: “God loves everyone—even you!” his voice full of energy and spite, his index finger pointing aggressively out the car window.

I really needed to lie in the grass now. What did the Bible even say? What kind of a weapon was I intending it to be? The weird thing was that my husband, the kids, and I—after months of hemming and hawing, hand-wringing and worrying—had just joined a Baptist church ourselves three months earlier. Already I was screaming at people to read the Bible?

I felt pretty uncomfortable being Baptist, like I’d consciously thrown myself in with people who were irrational. I was absolutely stunned by the tenacity of the Westboro Baptist Church members. They’d traveled more than a thousand miles to protest a high school play. How could they possibly keep up with every high school drama department’s schedule? Who was their secretary? I was equally shocked by how quickly I’d gone ballistic, my fury rising in a split second, when the woman accused me of lying to my children. “I don’t even know what the truth is!” would have been a more accurate thing for me to yell.

Certainly, I was no stranger to irrationality. In fact, I’d embraced it over and over, attending—and loving—dozens of mystical and bizarre Christian evangelical, Wiccan, Vodoun, Druid, and Santeria rituals all over the American South while in graduate school. Whenever things got too freaky, I could always step back into the comfortable posture of “cultural observer.” I’d also argued for years (passionately but amicably) with my scientist brother, Justin, about the impossibility of knowing everything through sheer rational inquiry, and the value of God, even if She was a human construction.

Becoming Baptist—at least in Durham, North Carolina—was different. It felt like embracing a mainstream, codified irrationality, and that made me nervous. I liked to pick and choose my own irrationalities because they felt true to me, instinctively. God felt true to me, but I didn’t like hearing Him called “Lord.” It reminded me too much of the Knights of the Round Table, all their voyaging and slaughtering of heathens. I also didn’t like that the Christian God had sacrificed His son, even if that was supposed to be for my benefit. Couldn’t there have been another way? Finally, how could the woman on the street draw her hateful fodder from the same book I was supposed to turn to for solace and wisdom?

On a more personal note, I worried because that day I was in the first trimester of a pregnancy, prime miscarriage time. Was this kind of shouting and carrying on good for my fetus? Did God really want me to drive slowly and yell at people on the street? It seemed unlikely that She did. Participating in a counter-protest in support of gay rights would have been one thing, but just screaming from the car? That was just stirring a pot and waiting for the boil. I saw myself at a pretty low level of human interaction right then.

Richard Dawkins, author of The God Delusion, says there is no such thing as a Christian child, but only a child of Christian parents.[1] As parents, we teach our children what we believe, exposing them to influences we feel are helpful and accurate while attempting to minimize influences that we find negative. Meanwhile, the children, themselves, are too young to fully consent to any of this, or to know yet what they will grow up to believe in their own hearts. I was a pregnant Christian mother (albeit a freshly minted and ambivalent one) driving my kids past a different Christian mother, standing on the curb with her kids. Then we started screaming at each other. It was so compelling to judge her as a brainwasher, someone teaching her children to hate gay people and using the Bible to hammer that lesson home. What would her children think for themselves when they grew up and got out of her reaches? What if one of them—several were teenagers—already suspected that he or she might be gay?

Ben and Joseph knew that Duncan and I were uncertain about Christianity; that’s why we had a habit of frequenting, then leaving, different churches. But we were really trying to make a go of it this time. Did this mean we were brainwashing our sons? Allowing others at the liberal, social justice-oriented Grove Street Baptist to brainwash them? It was hard to see what the right thing, or even a right thing, was. Duncan and I didn’t have anything near the certainty that the woman on the curb seemed to possess. But didn’t joining a church—which we did as a family, not just as two independent adults—mean we accepted what was said and believed there? That we wanted Joseph and Ben to accept and believe it? I didn’t know, at all, if this is what I meant.

Faulkner Fox lives in Durham, North Carolina with her family. She is the author of Dispatches From A Not-So-Perfect Life, and is currently writing a book, God For Girls, which describes her search in the Bible Belt South for a version of god that won’t hurt her nine-year-old daughter. Faulkner teaches creative writing at Duke.