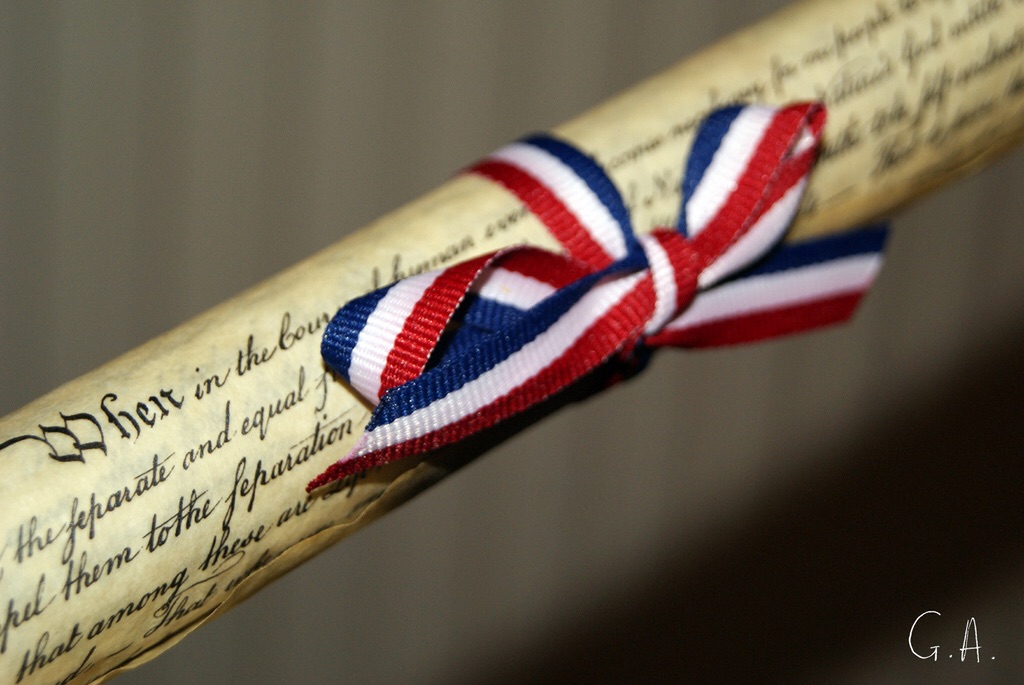 I actually took some time this morning to try to be a responsible citizen. I read the American Declaration of Independence on this 239th anniversary of the document’s being adopted. Actually, I read as much of it as I could. I could not get all the way through the list of grievances against King George and Great Britain, but I got the gist of it!

I read some background, too, in the Wikpedia article. Could not get through all of that, either, but hey, this is all Extra Credit of Good Citizenship, isn’t it? I recently saw a play, expertly performed by the graduating 5th grade class of the Meher School, where I work, all about the creation and adoption of the document. There I learned the poetic fact that Thomas Jefferson suffered from intense headaches–likely migraines–for 6 weeks before being able to finish the writing! It is was though he embodied the conflict he was writing about, as though the “demons” were tormenting him, until finally came the flood of release that brought the finished Declaration (though still to be edited by Congress), and a clear mind free from pain! Powerful metaphor!

What of the fact, though, that the ideals–particularly the most famous of them, expressed in the second sentence–were utterly laughable in terms of the actual realities in America at the time?
“We hold these truths to be self-evident, that all men are created equal, that they are endowed by their Creator with certain unalienable Rights, that among these are Life, Liberty and the pursuit of Happiness.”

The document should more accurately have been titled, “Declaration of Independence of the White Landowners of America.” The arguments that have been made for an “economic interpretation” of the American resistance to continued British rule would seem to have some merit, since all of the 56 signatories to the Declaration were, I believe, white landowners. There is also the fact that the vast geographical separation of the colonies from “Mother Britain” must over time have created a continental bonding and restlessness.

Yet I believe that there were true visionary ideals coming through Jefferson’s pen. That is why the document has influenced similar Declarations by more than 100 countries all over the world. The ideals have become the bulls-eye which we have been ashamed to miss so widely, and so have tried to make more and more a living reality. The legacy of the Declaration, championed by Abraham Lincoln, is soaked in the blood of our Civil War. In my opinion, the Declaration of Independence stands as an expression, particularly in those telling two sentences, of ideals which have also been incrementally approached via women’s suffrage, the Labor Movement, the Civil Rights Movement, and the recent rulings on Gay Marriage and even Obamacare, which represents a step toward true universal health care. Some day, the right to a physical home will also be included in the list of “inalienable rights.”

Some day we will be able to forget the Declaration of Independence but only when we have removed many more barriers within us, paving the way for a truly free and democratic external environment.

May that day not be far off! Prayers for our nation and the world it is part of, and in many ways a microcosm of.