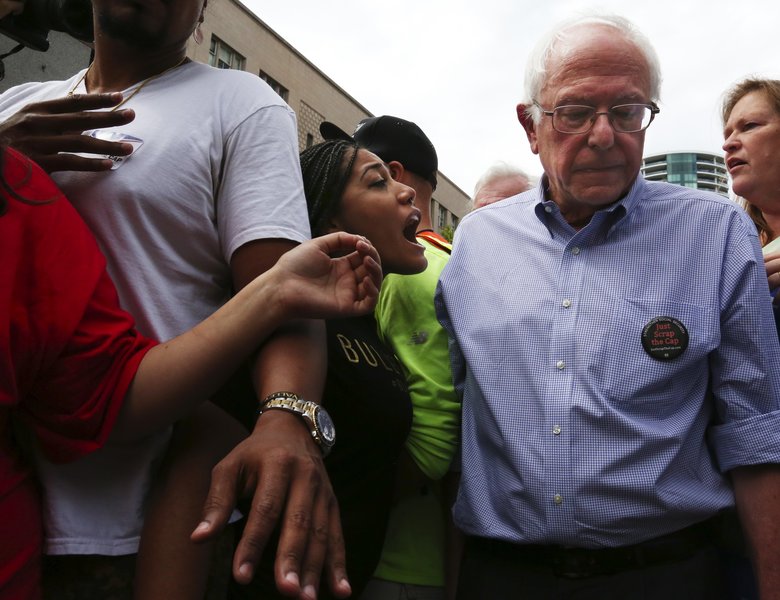 The easiest thing in the world for me to do is to simply pick a side and make fun of it. What a fucking mess. However, given the fact that the issue at the center of it all is nothing other than the systemic racism embedded in U.S. society, it’s hard to know what else to expect. We are shit at talking about this, total and absolute shit.

If your weekend was anything like mine, there’s no need to go over the details. You know what happened. My initial reaction could be described as strongly worded befuddlement; to paraphrase, “I get disruption, but why this guy? Why not Hillary?” Apparently, the pestering Clinton aspect has been there, even if I haven’t seen it (which is exactly like Sanders’ response to #BlackLivesMatter since #NetRoots).

The fact that Sanders was not given the opportunity to directly reply after he ceded the floor is the one criticism of what happened on Saturday that still kind of sticks. This is strictly from the standpoint of political discourse as “the airing of grievances followed by a response” set of protocols. I now realize that wasn’t the protest’s intent on Saturday, but it’s what I would’ve wanted to see. I’m a dilettante, of sorts, of political junkie-ism. What this means is that I enjoy debates, I love the mix of airing potentially volatile grievances with the people who are ostensibly representing us in government. Say what you will about the pommy Brits and their colonies, but they have this shit down. #BritishParliamentRules

When the question came up of whether the protesters would let Bernie speak, he was told unequivocally that he’d never get to speak. There are two reasons why this is disappointing; the first is something that local writer/performer, Chad Goller-Sojourner, did a great job of deconstructing in a video I’ll include at the end of this post. The second is simply that the moment represents a hugely missed opportunity for both BLM and Bernie Sanders.

Anyway, opportunities to keep attacking Sanders’ followers for stepping over the line will be plentiful in the (hopefully 18) months ahead, mostly because they keep on doing it. Oh, how often they cross that line. Young, old, men, women — boneheaded-ness seems to be an equal opportunity malady in this camp.

Over the weekend, I had cause to write this:

“I’m for Bernie. I hated what happened yesterday. That said, going around calling them thugs and implying they could have assassinated Sanders means that they had all the business in the world making this protest.

The ensuing conversation was brief and ended when the recipient said, “You are obsessed, leave me and my opinions alone. You sound like you have problems.” I replied, “Gevalt.”

There’s a 50/50 chance this group took down the link I posted to the Seattle Globalist piece by Ijeoma Oluo. It’s also a 50/50 chance that the admin hasn’t approved the post for non-nefarious reasons. [This latter turned out to be the case. –ja]

I do hope the opportunities decrease over time due to open-mindedness and conversation helping them see a different point of view. Also because I support Sanders and would hate to be reminded of shitty supporters all along the way. (My pitches for abandoned hashtags, all based around The Trashmen’s “Surfin Bird“: #BernIsTheWern, alternately, the more pedestrian #BerniesTheWord, and #SurfinBern with accompanying gif image.)

Sanders himself is fine on a person-to-person basis. People, even skeptics, groove on the fact that Economic Justice is his jam, but his demeanor lacks something when talking about Racial Justice. A combination of never having to do it (hello, White Privilege) and the culture he came up in. This culture loves to avoid conflict, particularly political debate, though this doesn’t completely explain the way his demeanor projects awkwardness. This is especially true for a PoliSci student from the University of Chicago — you can tell he’s holding back. If he can figure out a way to say “do your thing, but I get to reply eventually, all right?” respectfully, he’s got it made.

But again, making fun of him and his supporters is easy, pointing out their foibles is fish-in-a-barrel stuff. The group that needs some attention is on the other side of this equation. I’m not talking about the BLM folks, or the folks directly in the movement (if you’re not going to meetings more than once every two months, you’re not directly in the movement, you’re a supporter). I am also not talking about the #EarnMyVote crowd, some of the most constructive conversations I had on Sunday were with these guys.

You guys, I love your sincerity, I do. Here’s the thing about discourse, though, the other person has to speak eventually. One person talks, they say whatever they have to say, funny, rude or totally serious while the other person listens respectfully. Then they trade places. This has to happen, regardless of how right you think you are. It’s a wonder how this hasn’t been instilled in most of you, given that you tend to be left leaning, but then you only outnumber the boneheaded Sanders supporters by a reasonable margin. If they don’t get it, I shouldn’t expect you to.

Except that doesn’t work, you have to be better than them. Exactly because, generally speaking, you are younger than most of your counterparts. By simple virtue of being further from the grave, you’ve got to show that the future will improve by deciding to adopt better manners when engaging in conversation. Not fair? “BLM doesn’t have to?”

The reason BLM gets away with not doing it is because they have done the work to be identified as a full on Protest Movement. (I’m embarrassed to admit it took me a while to get this, I had thought them a gentle protest.) You don’t have that excuse, you’re supposed to be the connective tissue between your world and the Bernie supporters. Just because there are ponces and cows (the Brit equivalent for blowhards, mansplainers and shrill women…told you I was obsessed with Brit pols-speak. #MockTheWeekonYouTubeBitches) among Sanders’ followers does not mean you get to adopt that shit with every opponent you meet. Do some deserve it? Yes, but not every single one of them.

Also, BLM knows people are gonna get pissed off, it comes with the territory. Give people some room to vent. Not be obnoxious, just vent.

All of which is a long way to say that I appreciate this message coming out from the admin of Seattle for Bernie Sanders‘ FB group page. Here’s a portion, you can read the full thing on their wall:

This is Patti, the admin…

Yesterday I felt guarded, I felt defensive, I was disappointed… and today I listened. I will not paraphrase the sentiment of BLM because I have no right to speak for others. That’s what I learned today.

I know this because I contacted the person who knows them and I asked. And then… I listened.

She spoke at our monthly meeting which I feel was the most productive and inclusive meeting yet. Please, hear me when I call for peace. And I call for unity. And I ask for solidarity. We can win this. We really can. If we stop for a moment…

I realize she’s likely a hired goon (they claim to simply be an all inclusive group), but this is the right message to send across. It is my job as connective tissue to take that in, acknowledge it, and compliment it, if warranted. So:

Thank you, Pattie, admin for Seattle for Bernie Sanders. This message is appreciated.

Now, to convince some stubborn Sanders supporters that it doesn’t matter if the protesters are from “the REAL BLM” or not.

Some thoughts and ramblings on direct action and today’s failed Bernie Sanders rally.

*Edited to clarify the racial make up of the parties being discussed. –ed