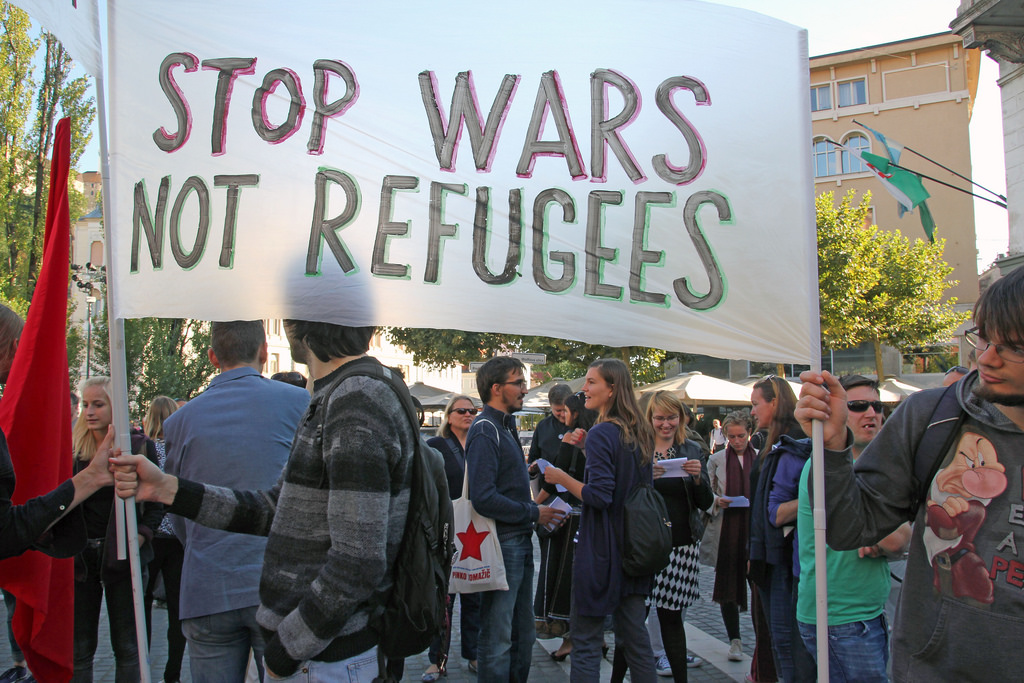 The main cause of the refugee crisis in Europe is the U.S. wars and sanctions to orchestrate regime change in the Middle East, North Africa and Central Asia. The horrible images of hundreds of thousands of refugees from Syria, Iraq, Afghanistan and North Africa have inundated the airwaves non-stop. However, the context of the recent flood of refugees is never discussed. It is the U.S. and its NATO and Arab state allies that have caused the destruction that has destabilized the region and introduced sectarian divisions in the populations with the aim of dividing and controlling this oil-rich area. It is also the U.S., its allies and policies that created ISIS and Al-Qaida. In Syria, for example, this has led to an estimated 125,000 fundamentalist mercenaries from 80 countries with the same goal as the U.S. and its allies: regime change.

The foreign countries that have bombed Syria alone include: the U.S., Canada, Israel, Saudi Arabia, Turkey, Qatar, UAE, Jordan and Bahrain.  The refugee crisis in Europe is being used to bring other U.S. allies into this fight and soon Britain, France and Australia are expected to join the bombing effort. Although the ostensible target is ISIS, the bombs seem to fall mostly on the Kurds and Syrian held areas and infrastructure. Indeed, literally all the nations bombing Syria today have indicated their objective is removing the Assad government.

Besides the wars, the U.S., IMF and World Bank-imposed sanctions and embargoes, along with sabotage, on countries that show any independence or resistance to U.S. demands have led to massive and vital infrastructure destruction and the impoverishment of millions in the region.  The result of these policies has been hundreds of thousands of deaths and millions of refugees.

Although we now see hundreds of thousands entering Europe, the world has turned a blind eye to the millions who have been internally displaced or fled to neighboring countries like Lebanon and Jordan.  Many of the Syrian refugees were first refugees from the U.S. war against Iraq who fled to Syria and now are forced to flee again.  Today, half of Syria’s 23 million population are displaced.

The refugees’ horrendous conditions are exacerbated by the inexcusable cutting of meager food rations and assistance for basic needs due to the lack of funding from wealthy countries and the UN’s Food and Refugee Assistance programs.  These desperate people lacking adequate shelter, food, and medical care move because they have no choice.  Because of fences and racist policies of closing borders, many fall victim to traffickers and desperate and unsafe attempts at illegal entry.  The U.S. government spends trillions of dollars on wars in these regions, but next to nothing to alleviate the suffering of the victims of their onslaughts.  Capital can flow freely between borders while people displaced by the consequences cannot.

The refugee “crisis” in Europe is not one of capacity but of the barriers of racism and xenophobia.  The wealthy countries have the means to humanely absorb the refugees.  Refugees represent a small percentage of the total populations.  (In perspective, 11 million undocumented immigrants in the U.S. are about 3.5% of the population and 13 percent of the U.S. population is foreign born.)  European countries have half this tiny 3.5 percent proportion of immigrants.  Racist fears of people who are non-white or non-Christian fuel the growth of the right, as it does in the U.S. re: refugees from the South fleeing the poverty and violence inflicted by U.S. economic policies.

The U.S. and its allies in Europe and the Middle East created this disaster yet they exempt themselves from accepting any responsibility.  Under international law, these countries are obligated to offer asylum and protection.  We must hold them accountable.  The U.S. announcement that it will accept only 10,000 Syrian refugees over the next year is reprehensible.  Not only must we demand that our government offer asylum and protection to all the refugees who want to come, we must champion the fight for massive reparations to the war-torn countries devastated by imperialist interventions.

Beyond advocating for the humanitarian measures, we condemn U.S. imperialism, NATO, and its Middle East proxies for the criminal wars and interventions that create the necessity for mass migration of millions just to survive.

For more in depth article on the refugee crisis from Judy Bello, another UNAC leader, please go here: http://deconstructedglobe.com/wordpress/eu-refugee-crisis/