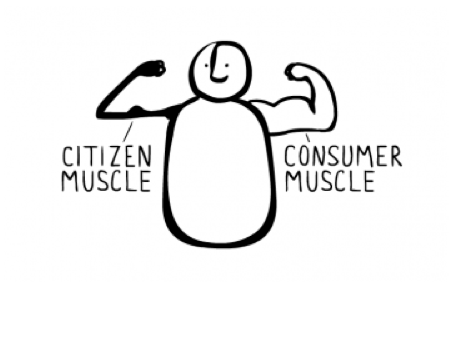 We have all felt it, that intense longing for the newest, flashiest version of something we already own. Whether it be clothes, a car, or a computer, Americans are constantly told by the media and politicians that in order to be a successful member of society, we need to consume the newest goods, and often. Thus, consumerism has become a form of citizenship. In his book, An All Consuming Century, cultural historian Gary Cross defines consumerism as an ideology that Americans are unaware of and unwilling to consider modifying. He calls it “an inevitable compromise between freedom and necessity” as our economy is structured around rigorous work ethics in order to satisfy our needs for constant consumption. Cross claims that consumption is “a choice, never consciously made, to define self and community through ownership of goods.”

Today, the symbolism attached to products indicating wealth, prosperity and success drives the American tendency to belong through consumption. Products have acquired an almost spiritual quality as “feelings of quasi-religious joy and contentment that [come] when consumers [are] accepted by others (and themselves) through their goods” incentivize consumers to buy products not for their functional value, but rather for “their meaning as markers of status, participation, identity, progress or memory.” Consumption has even become a celebration of identity to help distinguish individuals from society, as historically minority groups have defied hegemonic power through music and clothing choices.

Yet, we see growing social fragmentation as politics cater to the consumer citizen and consumption becomes a need—defining who we are. This makes it easier for politicians to sell ideas of deregulated markets and shrinking government based on the rationale that these changes mean more consumer choices for the individual. Our culture of consumption drives businesses to increasingly employ workers in countries outside the U.S. to develop cheaper resources, cheaper labor, and cheaper products. However, as jobs and production are outsourced, higher competition for less work means more stress for the individual Americans as the risk of debt and levels of social isolation grow higher.

This leads to a vicious cycle in which individuals seek to ease their social isolation through the consumer lifestyle. As Cross says, “Consumer goods defined and eased the initiation, maintenance, and dissolution of social relationships, allowing individuals to protest and define boundaries with others. To own was to be in society.” More simply, we are told by corporations and politicians that to belong in our desired image tribes we should wear the trendiest clothing and use certain products to fit in. As Adbusters Co-founder and Editor-in-Chief Kalle Lasn puts it, “The most powerful narcotic in the world is the promise of belonging, and in this culture, we belong by being cool. Our desire for belonging can be satisfied at any store, for the right price.”