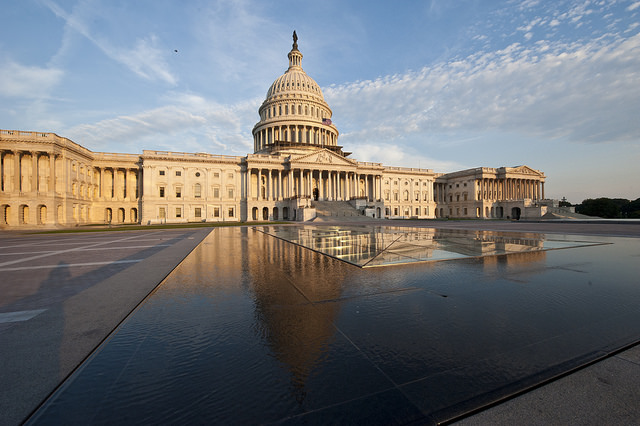 Along with a $1.1 trillion spending bill that will keep government funded through September, the U.S. Congress is on the verge of passing a Republican-backed, $629 billion package of tax cuts that one group calls “a lobbyist-wrapped Christmas present for our nation’s biggest corporations.”

The package of bills unveiled Wednesday is facing criticism for its lifting of the long-standing oil export ban, as well as its inclusion of a controversial cybersecurity measure that watchdogs say will quietly expand mass surveillance. The budget bill also repeals a law requiring Country Of Origin Labels (COOL) on meats—a move Food & Water Watch decries as “a holiday gift to the meatpacking industry from Congress.”

To be sure, the package also includes tax incentives for wind and solar energy and permanent extensions for the enhanced child tax credit and earned income tax credit, which will help working families.

But Bob McIntyre, director of Citizens for Tax Justice, says the “good things” in the package “come at far too high a price.”

Specifically citing the “active financing exception” for multinational financial corporations and the “much-abused research credit,” McIntyre said: “It is outrageous that lawmakers have fought all year over how to pay for essential public investments like our highway program, yet they have no problem putting hundreds of billions in mostly wasteful corporate tax breaks onto our nation’s credit card.”

The active financing exemption, which dates to 1990, is a Wall Street priority that would permanently allow financial companies to defer taxes paid on interest and dividends earned overseas. As David Dayen wrote Thursday at the New Republic, “This creates incentives for accounting tricks to make it look like interest, dividends, or other income comes from overseas. It effectively legalizes foreign tax havens.”

Having won another $650 billion of government defunding while handing $650 billion to big corporations, Republicans will soon come back and complain about “deficits” and demand a new round of cuts in the things our government does for us.

Indeed, critics suggest Republicans are playing a cynical long-game, hashing out federal spending debates “in a frame of fiscal austerity that means that government cannot adequately serve the needs of its people,” wrote Isaiah Poole at the Campaign for America’s Future blog on Thursday.

Dayen made a similar argument, writing that “the real winner…appears to be the Grover Norquist-style principle of ‘starve the beast,’ the idea that you can endlessly cut taxes as a pretext to crying poor about funding for government services.”

“That inadequacy then becomes the fodder for the right-wing demands for more spending cuts (and tax cuts for the wealthy), schemes to privatize certain government operations, and punitive attacks on government workers who are expected to grin and bear it through salary freezes, benefit cuts, staff reductions, and assaults on their right to organize,” Poole explained.

“That is the evil genius of how congressional Republicans have manipulated the budget process to serve their ends, even with President Obama in the White House,” he argued.

“They have an ideological scorn for government in general, and a particular scorn for government programs that ask the haves to help the have-nots and that limit the ability of the super-haves to game the economy at the expense of everyone else,” Poole said. “At a time when a weak, uneven economic recovery from the worst economic downtown since the Great Depression would have called for sustained heavy investment in the rebuilding of the economy, congressional Republicans have instead straitjacketed spending and sabotaged government functions.”