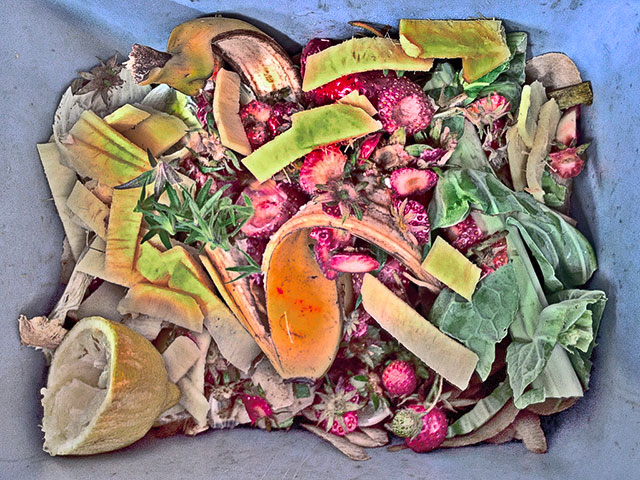 Shortly after signing my contract as a store assistant for a well known low-cost German supermarket company, I came across a nasty reality that seemed not to bother the rest of my colleagues: every day, at a sleepy four o’clock in the morning, a random employee has to do the “waste inventory.”

This consists of scanning all the products that can’t be sold anymore, one by one, and then throwing them out into a blue container. The resulting mountain of food is impressive—around seventy bakery items, a hundred pieces of fruit, and fifteen trays of meat. Over two hundred food items start the morning at the bottom of the garbage container, every single day.

But that’s not the most surprising thing. The real scandal is that very few of these items need to be thrown away at all.

Of course, the expiry dates of food have to scrupulously obeyed, but most of the reasons for throwing things away have nothing to do with protecting our health. Instead, we get rid of items just because they’ve lost their label, or because the package is broken, or because they’ve been left outside the fridge. In the frenzy of a regular work day, employees don’t have time to scrutinize every corner of the store, searching for items that a neglectful customer has left out of place on a shelf, or that they themselves may have forgotten somewhere.

As a rough calculation, I’d say that food that’s unfit for consumption accounts for less than half of what is thrown away. While doing the waste inventory I can see it, but the ‘waste’ is valued at only 300 Pounds or so—less than one per cent of the store’s daily income.

What happens to it? I ask the delivery guy where he takes the food.

“To the incinerator,” he replies. “Why, are you hungry?”

If you’re able to imagine one ton of food and then multiply it by a hundred million you get the exorbitant amount that’s wasted in Europe every year, according to a report from the European Parliament. At the global level, the FAO calculates that this comes to 1.3 billion tons per annum, or a third of all food that’s produced. I can see a tiny part of this nonsense, day by day, in my shop.

What’s going on? At the heart of the problem is a basic lack of care, brought on by a culture of rushing, speed, and busyness—lots of people, scanner sounds, the noise of coins and trolleys—everything in a hurry. In shops like mine, everything is meant to be this way. The tills are designed for customers to be there for as little time as possible so that more people can be processed in the same number of minutes.

In some ways the till is the perfect symbol of modern slavery: immersion in this small metal cage implies an average of six hours a day sitting and doing mechanical and monotonous scanning-and-packing work with one 30-minute break. Greetings and goodbyes are identical, mechanical, pronounced a hundred times per day: the same jokes, the same comments.

Customers can pay with a new system called ‘contactless payment’ that works by simply touching a credit card to the machine. “They do that so we can spend quickly… and more,” an elderly customer says to me wisely. No time for conversations. I serve 20 people every ten minutes. That means 60 every half an hour, 120 per hour, and around 500 during a standard shift—giving each customer 30 seconds to chat. It feels kind of disturbing to interact with 500 different people during six hours without ever having a conversation.

Rushing also means that things get dropped. Glasses are broken, yogurt is scattered, or an egg from the box is broken when you’re trying to stack it up in the crammer stand. So that means throwing the whole carton away. And when the day is close to an end, tiredness sinks in. The more tired we are, the less we care.

Interiorizing this culture of rush makes everybody feel annoyed when something doesn’t work—for example when items pile up, plastic bags are difficult to open or barcodes won’t scan. Or when the cashier forgets a code or the customer takes too much time packing everything into their bags, exasperating the rest of the queue. Almost without noticing, I’ve adopted a way of serving that pressurizes customers to leave over time. When did I and my colleagues start behaving this way? None of us know.

Some mention the ‘pressure’ of the long queue, or the customers’ comments that encourage you to be quicker. Or the manager’s instructions that force you to speed up if there’s a long line or to close the till and do something else if it’s not busy, in order to avoid a single minute of inactivity. Bosses also encourage us to speed up by giving a prize to the fastest cashier every month. As an experiment, I reduce my speed and soon I’m pressured to scan faster in order to ‘hit the store’s target.’ By the end of the shift, rushing has burrowed its way deep into my bones.

Do things have to be this way? Isn’t there an alternative? I want to believe that there is.

Barely two hundred meters along the street from where I work is another smaller shop called hiSbe. It calls itself an “ethical supermarket, independent and community-run,” and it has the aura of something more organic and environmentally-friendly. I go inside to take a look.

The shop looks less busy and less crowded with people and items. There are four employees with smiles that don’t look forced. Prices and quality are not reduced as much as on the crowded low-cost shelves that I’m used to stacking. Its claim to put “workers and suppliers before benefits” may not be a pose after all.

One of hiSbe’s commitments is “refusing to throw away any food that can be eaten.” How do they accomplish that I wonder? Here’s what I find out: they reduce the price of any surplus goods before the delivery of new stock; they minimize packaging and sell stuff by weight; they give items away for free like eggs which are about to expire; and they don’t discriminate against ‘ugly vegetables’ that aren’t the standard size and look.

Above all, things are done well and carefully and without rushing. It’s a small shop without too many customers, so there’s more time for chatting. Less rushing means that things aren’t dropped or broken so frequently or forgotten somewhere out of the fridge. “We barely throw any food away at the end of the day,” one worker confirms to me.

This isn’t an isolated example. There are a growing number of citizen initiatives which are fighting against unjustified waste like the ‘dumpster diving‘ movement, or the Real Junk Food Project in Brighton—a food bank that uses items discarded by local supermarkets. In Lisbon, the Frutafeia co-operative campaigns against standardization in foodstuffs, especially vegetables, while Berlin’s ‘social fridges’ offer self-service food for free to people who are homeless.

In the current dominant system of food consumption and the culture of rush, a daily mountain of edible food that’s thrown into a bin is not considered a failure—it’s simply one of the many consequences of doing business as usual. To reverse that process, we all have to put our shopping into question.

Originally published at La Pluma Entrometida. This version edited by the author.