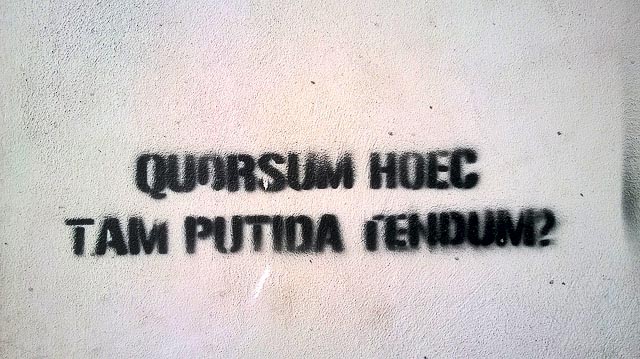 One can only conclude that the Turkish Government’s heavy-handed reaction to petitions supporting arrested academics is the continuation of a wider trend of restricting civil liberties and freedom of speech.

Following the arrest of 27 academics, and a criminal investigation into more than a thousand individuals across 90 Turkish universities, the Turkish Government has taken significant steps towards restricting academic freedoms. The academics who were taken into custody have since been released, but if convicted of charges of “propagandising for a terrorist organisation,” or insulting the Turkish state, could face up to 5 years in prison.

Initial tensions begun a month ago following an open letter to Turkish President, Recep Tayyip Erdoğan, signed by foreign academics, and including Noam Chomsky. What began as a highly publicized spat between Erdogan and Chomsky has now become a catalyst for the current wave of arrests, and has raised concerns regarding a possible witch-hunt against academics critical of the AKP government.

According to the Academics for Peace initiative, when the petition was initially released on Monday January 11, over 1,400 academics and researchers from Turkey and abroad had signed the document with more than 1,200 signatures originating from Turkish institutions of higher education. The Turkish Council of Higher Education (YÖK) has since indicated that it will be taking legal action against the Turkish signatories of the Academics for Peace petition. The events have sparked an international outcry, as well as inspiring numerous calls for solidarity.

While the website for the original petition is no longer accessible online, the document has spawned petitions of solidarity from Turkish journalists, filmmakers, lawyers, publishers, and foreign academics. A petition on Change.org featuring a copy of the original petition has amassed nearly 4,000 signatures, and a UK version of the Academics for Peace initiative has collected more than 800 signatures from professors and researchers across British Universities. The petition is expected to be sent to the UK’s national press on Monday.

And yet when the US embassy issued a statement professing concern over the arrests of the academics in Turkey, it wasted little time in simultaneously denouncing and rejecting the petition itself. The statement indirectly described the petition as containing “controversial” and “unpopular” views, and emphasized that the US does “not agree with the opinions expressed by those academics.”

The inverted nature of such a statement, in which freedom of expression is defended, but the expression itself derided, completely undermines the potency of the message, regarding the unwarranted arrests. Of course this betrays a lingering discomfort with the intrusion of intellectuals into the realm of politics, a world deemed privy only to think tanks and politicos, or what Christopher Hitchens once referred to as the “lumpen academics” of the professional foreign policy establishment.

That being said, the petition itself is hardly a radical document. To realize this one has only to read the text. It clearly spells out both the humanitarian consequences of the conflict in South East Turkey as well as making various demands for a peaceful resolution of the conflict. The document is urgent but focused. It refers to the conflict as a “massacre” and as a violation of international law, but also suggests options for reconciliation and the willingness to cooperate with parliament, international organizations, and political parties.

As David Graeber – one of the more prolific signatories– has pointed out, nowhere does the text do anything else but call for peaceful negotiations. It even offers avenues of cooperation on behalf of the academics. The text contains none of the supposedly terrorist or treasonous rhetoric it is being accused of. That it would be interpreted as such is highly suggestive of the reckless and inflammatory way in which Erdoğan has seized upon the petition as a means by which to polarize and vilify even the most conciliatory of criticisms.

To imply that the petition is in any way a manifesto or a call to arms, let alone a treasonable or terrorist document, is simply to deny the very practical and solution-oriented call for peace that it poses. This also goes a way towards explaining why so many academics in Turkey and abroad were willing to sign the petition in the first place; it underlines the popular opinion that a peaceful resolution of the Kurdish conflict is imaginable, feasible, and to be desired.

Let us also remember that the petition’s main focus – that of a peaceful end to the Kurdish crisis – was until not too long ago one of the AKP’s top priorities. In fact, putting an end to the so-called Kurdish issue was a key part of Erdoğan’s political platform. For the very same government to now suggest that any desire for reconciliation with the PKK is treasonous emphasizes the radical shift the party has undergone in recent times.

As such one can only conclude that the Turkish Government’s heavy-handed reaction to the petition is but the continuation of a wider trend of restricting civil liberties and freedom of speech. For years the Government has sought to insipidly infiltrate university administrations by restructuring the Council for Higher Education, granting it powers to take over private universities, meddling with academic appointments and tightening restrictions on grant money. Now, it seems, the fight against academic freedoms has broken out into the mainstream of Turkish political rhetoric.

Following the release of the initial petition, Erdoğan took to the stage to criticize what he referred to as “crappy so-called academics.” More specifically, he warned not all professors to think themselves as “so-called intellectuals.” The formulation demonstrates how academia has increasingly come to be seen as a diploma-producing machine, rather than a space for criticism. Indeed, his rhetoric points toward a longstanding frustration with pesky intellectuals acting outside the professional confines of the classroom.

Yet the specific distinction he makes between “professors” and “intellectuals” also indicates a desire for universities to become centres of (knowledge) production in the conservative sense. One of Erdoğan’s key criticisms has always been reserved for groups who supposedly step outside the boundaries of their socially assigned positions. His attacks on women, journalists, foreigners, and academics have always centred on the fact that they should know better than to exceed their social boundaries. If universities fail to challenge such notions of a rigid society, then they too will ultimately succumb to such clear-cut expectations of conformity.

Seen in this light, Erdoğan’s scalding rebuke to academics that they must “pick a side,” i.e. to be either with the Turkish State or with the terrorists must remind us (as it did Noam Chomsky) of when former President G.W. Bush made virtually the same pronouncement over a decade ago following the attack on the twin towers.

The subsequent failure of American and European progressives to communicate the now commonly accepted irrationality, even illegality, of the invasion of Iraq shows that the desire to curtail academic expression is a global issue, not just one of developing democracies. Think of recent attempts in the UK to censor and stifle academics’ rights to express themselves freely on contentious issues (and to grant voice to the “radical” opinions of others). This is not a complaint that is unique to Turkey.

Since then, an unexpected and frightening escalation of the reaction to the petition has been the awakening of an ultra-nationalist presence on Turkish campuses. Already images have circulated showing gangs of nationalist students marking professors’ doors, and posting threats to individuals who signed the petition.

It is the Erdoğan-doctrine in full force; to deny dissenting voices any expression on their own terms, and to instead ignite and awaken pre-existing social divides that have long lain dormant. As anyone who has visited any of the big campuses in Turkey can attest to, the student body is not necessarily a homogenous one, nor should it be. Yet the on-campus resurgence of socio-political divisions, including radical nationalism may prove more detrimental to the future of Turkish academia in the long term than the actual theatrics of the arrests themselves. Already professors across the country have expressed fear of going to work, or are otherwise being pushed out by administrations less willing to expose themselves to attack.

And while academics outside Turkey may not face a specific threat, it would be a great mistake to forego the fruitful progress that had just begun to make itself felt on Turkish campuses. To allow Turkish academics to be vilified and isolated would be to concede defeat to the most conservative and anti-intellectual impulses of Turkish society.

Finally, it is hard to underestimate the severe impact the arrests will have on Turkish universities’ attempts to internationalize. For years there have been threats from European universities to pull the plug on Erasmus exchanges. The highly publicized arrests of foreign students, the Ankara campus riots, and the purported disappearance of large quantities of grant money into the pockets of university administrators have made European and American universities doubt the wisdom of pursuing further ties to Turkish institutions of higher education.

A reversal of international cooperation would have a devastating effect on the diversification of the student body, but also on the extensively integrated language schools, not to speak of the accommodation and housing market. Most importantly, it would stifle Turkish students’ access and exposure to ideas and experiences from beyond their own country.

Coincidentally, Turkey will be hosting this year’s World Congress, the annual conference of the International Political Science association (IPSA). The conference is one of the biggest events in the field of political science, and will see thousands of researchers, professors, and grad students descending upon Istanbul to discuss a range of issues under the auspicious theme of “politics in a world of inequality.” It also provides an important networking opportunity for Turkish universities and international cooperation in research projects. The conference presents an urgent opportunity for academics from around the world to stand in solidarity with their Turkish counterparts.

This is why it is so urgent to show solidarity with academics in Turkey. To forsake our Turkish colleagues at this crucial point in time would be to waste decades’ worth of internationalization and cooperation, and turn our backs on the most diverse and progressive elements of Turkish society. This is why the subsequent solidarity petitions are so vital. They indicate to the Turkish Government, and to the world, an ongoing commitment to securing Turkish academia as part of a global community of researchers, despite the challenges they face in their own country.