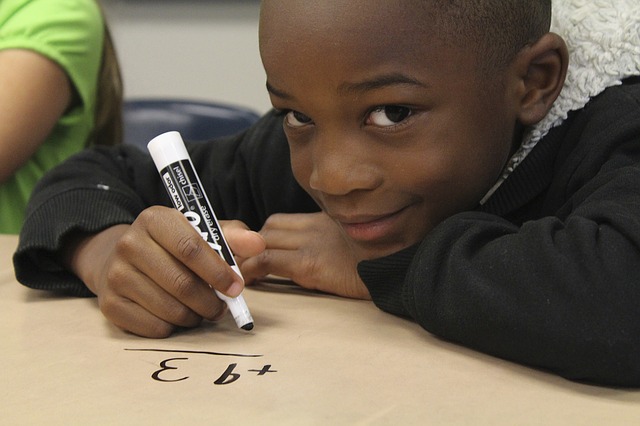 [/media-credit]
Teachers and parents: Do you have an hour? If so, please join our experimental math lesson study right here on Medium. It depends on the child, of course, but it’s a lesson probably best suited for someone in fifth grade or older, and we’re asking them to use math to answer this question: “Given the number of Syrian refugees who have entered Turkey each month for the past 12 months, how many refugees can Turkey expect to support by the end of 2016?”

Let me give you some context.

All throughout grade school, my favorite subject was math. To me, it was an intriguing puzzle that I was eager to solve, but to many of my classmates, math was more like a daily nightmare. At the time, I couldn’t understand why they didn’t love math, too, but in hindsight, perhaps I loved math because I was good at it. In classes like geometry that I didn’t pick up as quickly, I definitely had much less fun.

Now, as a teacher, I’ve consistently seen this pattern in my own students.

One student recently told me that she loves her humanities classes because “we get to discuss lots of different ideas. But in math class, there’s only one right answer, and I have to find it as fast as possible. I hate that.”

She’s clearly not alone in this thinking.

To me, this seems like less a response to the subject itself and more a by-product of how we’ve been teaching — or not teaching — math for generations.

Our focus on teaching calculations misses the real power of math, which lies in asking questions about the world, formulating them as math, and applying the result to real situations and issues in life. This discussion-oriented approach, as Stanford University professor Jo Boaler found in her research on math education, allows students to form more positive relationships with math because they are able to connect math with who they are in the rest of their lives.

In a world where computers can do calculations much faster than a human, I want students to know how to use math to solve real problems, not just be a human calculator.

I’m trying to figure out how we can make room in our math education system for students to ask their own mathematical questions of the world and then wrestle with the messiness in finding the answer. I have some ideas, and then there’s the lesson study below. I hope you’ll weigh in.

Let’s organize traditional math disciplines not by concept, but by big ideas and real-world problems.

Algebra, for example, focuses on defining and evaluating functions that model real-world phenomena, like how far a car travels or how much a company’s stock earns. Yet Algebra in school is often reduced to exploring functions outside of any context, so students are evaluating functions like y=x^2+10 without any understanding of what it might actually represent. While such problems might give students deliberate practice with algebraic skills, they also reinforce the idea that math is far removed from everyday life.

What if instead of teaching math by drilling concepts, we organized math into inquiry investigations around questions connected to the real lives of students?

At the Science Leadership Academy in Philadelphia, a public magnet school known for its inquiry-based interdisciplinary curriculum, algebra students dive into questions related to social justice. In one project, they looked at data related to incarceration rates to understand which communities and geographic regions arrest the most people, and then sought to understand why there seem to be biases in the criminal justice system. Connecting math concepts to real questions forced students to pursue deeper understanding of both the math and nonmath context to satisfy their curiosity and provide sufficient evidence for their claims.

Math classes are sequenced so you have to take them in a certain order to advance to calculus, often considered the top of the math pyramid. However, no other subject in school is sequenced in this way. High schools offer a plethora of options in English, social studies and science, with each class revisiting core ideas of the field in different contexts. American literature and creative writing, for example, both focus on reading and writing but from different perspectives.

We should take the same approach in math. Instead of sequencing math classes, we should design a variety of classes that revisit the core idea of modeling and interpreting the world through mathematical tools in different contexts. A few examples of topic-based math classes:

Stock Portfolio Management and Growth: Students set up a stock portfolio using real or fake money. They study a variety of companies and manage the portfolio based on future earnings models.

These classes might look like electives, but they don’t have to be. They could be the main list of math classes available to students in lieu of classes divided by discipline.

I’ve gone ahead and written up a lesson plan that tries to get at a lot of what I am talking about here.

I hope you’ll try it with your students or your kids at home. Teachers test it out, observe each other doing it, come up with your own ways to do this and make it better. Please let me know how it goes.

Time it will take: An hour

Target age: 5th grade and up.

Objective: Students will use math to answer the question, “Given the number of Syrian refugees who have entered Turkey each month for the past 12 months, how many refugees can Turkey expect to support by the end of 2016?”

Data: Monthly data on Syrian refugees entering Turkey in 2015 can be found in this Google spreadsheet based on data from the United Nations High Commissioner for Refugees (UNHCR). Note that February and August values are missing because they were missing from the UNHCR data. You may want to discuss with your students how to complete the missing data or let them discuss an approach with their work partner.

Start: What is happening in Syria? (5–7 minutes)

Explain to students that today they will do math a little differently. Instead of practicing several short problems, students will work on one bigger problem that relates to something happening in the world right now.

Ask your students if they know about what’s happening in Syria. Some students may already know, while others may not.

These are four videos about the Syrian from different perspectives. One approach to this discussion is for you to watch the videos outside of class, have students share what they know, and then you fill in the gaps. You could also show a video or a clip that best fits your students’ understanding, vocabulary, and attention span, and then discuss it together. If you choose to show a video, students may focus better if they take notes on key ideas while watching.

Key questions to discuss with students:

Present the question to students: “Given the number of Syrian refugees who have entered Turkey each month for the past 12 months, how many refugees can Turkey expect to support by the end of 2016?”

Before students start working, discuss with them why knowing this answer might be helpful to Turkey. For example, knowing how many refugees to expect will help Turkey plan how much it will cost to support them. The answer will also help Turkey determine whether the government has enough money to support the refugees — whether it needs to put a limit on the number of refugees they can support, lobby other countries to take on more refugees, or lobby stakeholders in Syria to stop the war.

Depending on how familiar your students are with problem solving, you may first want to explore the data together and discuss some possible strategies to answering the question. Then students can work in pairs to answer the question. Depending on your students, you may want to share the Google spreadsheet with them so they can do calculations in Excel. You might also print the data on a worksheet so they can do calculations by hand or with a calculator.

Here are some approaches students might take to solve this problem. They should come up with their own strategies.

Bright is made possible by funding from the Bill & Melinda Gates Foundation. Bright retains editorial independence.