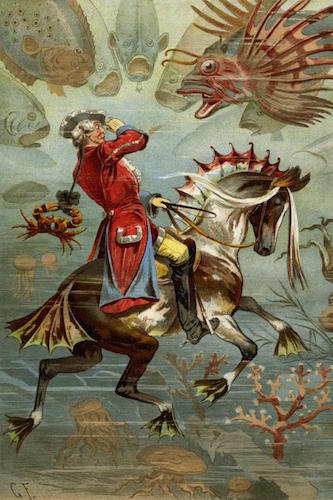 This week we get away from photography and technology and all those things to return you to the 18th Century. Many of our gentle readers have probably seen movies that feature the Baron but more than likely have never actually read Rudolph Erich Raspe’s collection of tales so tall they scrape the sky.

That’s a shame because the book belongs to that wonderful strain of fantasy that also includes Laurence Sterne’s The Life and Opinions of Tristram Shandy, Gentleman, Jonathan Swift’s classic Travels into Several Remote Nations of the World In Four Parts By Lemuel Gulliver, First a Surgeon, and then a Captain of Several Ships.

As Thomas Seccombe writes in the introduction, it’s also none too far from the world of Mark Twain and the curiously American genre of the tall tale, and one wonders about the spirit of fantasy that extends from the supposedly rational neoclassical period of the 18th Century into the Romantic era where fantasy and imagination were prized above all.

At the time of its publication(s) in the late 18th Century, it was considered adult fare only. So naturally children picked up on it and made it their own just as they did with the travels of Lemuel Gulliver. Sophisticated adults may be inclined to draw parallels between the Baron and any number of American presidential candidates.

For those of you who’ve never read it, this is a delightful two volume set of the Baron’s completely absurd adventures in the land of the skeptics, assembled by the fine folks at Standard Ebooks, a project that goes beyond the useful but plain text of Project Gutenberg to create styled and stylish public domain books with open fonts and lots of love. You should support them. We do.