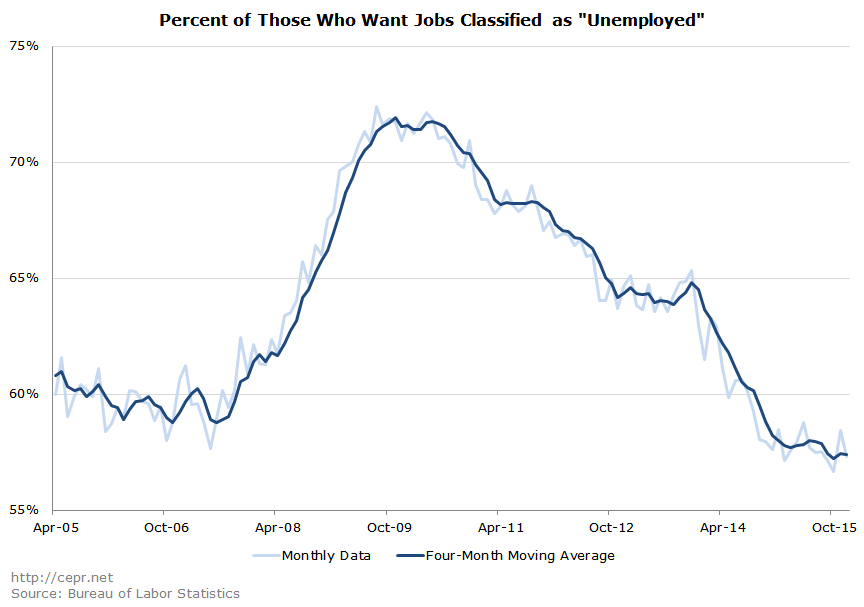 The graph above is interesting. It looks at newly employed persons, a group that includes all new hires except for people who were previously employed. There has been an increasing trend during the recovery for employers to hire people who are not in the labor force rather than people who are unemployed.

Before we proceed any further, it’s worth clarifying the Bureau of Labor Statistics’ definitions of the terms employed, unemployed, and not in the labor force (all persons who are employed or unemployed are part of the labor force):

The graph above does not include people who move from one job to another. (However, it’s worth noting that job mobility has been declining – employers are generally not poaching workers from other firms. This means that employers are not competing to hire workers and therefore not raising wages.) Rather, the graph looks at newly employed persons and asks whether they were unemployed or not in the labor force in the previous month.

It’s worth assessing both the causes and the policy ramifications associated with the trend of employers increasingly hiring people who were previously not in the labor force. From a policy perspective, this is evidence that the labor market has far more slack than the unemployment rate implies. When unemployment is low, we generally expect employers to raise wages since they have a limited pool of potential workers. Many employers will find it difficult to get workers with the needed skills from the pool of unemployed, so they must instead look to pull away workers from other employers. However, if many people are being hired who were not previously in the labor market, the pool of unemployed seriously understates the number of people available to be hired.

If policymakers want the labor market to tighten to the point where employers begin raising wages, we’ll have to see more than just a low unemployment rate. We’ll also have to see a decrease in the number of people not in the labor force who want a job. CEPR has released a measure of labor market slack known as the “jobless rate” which functions similar to the unemployment rate but includes people who want a job and are not in the labor force.

A second point is to ask why employers aren’t hiring the unemployed. One very plausible explanation is that this has little to do with employers’ preferences, and instead reflects the changing nature of the labor supply. This explanation fits with the fact that the unemployed represent a decreasing share of all non-employed persons who say they want a job: