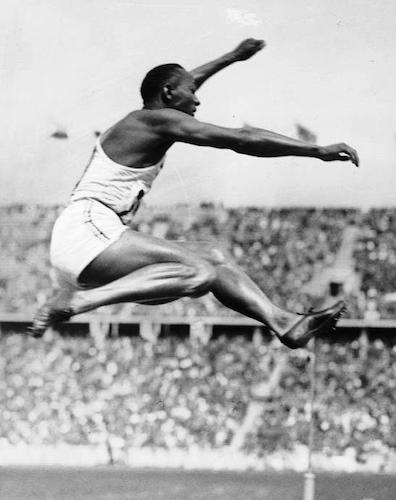 For a stranger he unwrapped lace cloth from treasure:
a scrapbook of oversized newsprint.
Its yellow cellotaped newspaper clippings
were his life-savings. Photographs, stories
of his dead uncle and the stranger’s hero: Jesse Owens.

The stranger listened,
aware that the apostle’s explanations
did not always match the newspaper stories
he ran his finger over with exaggerated motion.
Illiteracy?

“Ain’t just then, suh, that they hated
us,” he said, hunting but kindly the stranger’s eyes.
Blue, embarrassingly.
“It’s only a while back I couldn’t get a burger
in the fron’ of M’Donald’s. Had ta go round back
afore that.”

The nephew walked him down
to the Jesse Owens Memorial Park.
A local authority granted the family this land. Reluctantly?
It could have been beautiful. With quality grass,
and children. And life.
None. The birds conveyed disappointment.

“We had a bronze statue here, but very first week
white boys come and put chains round unca Jesse’s feet,
pulled him down with a pick-up.”

The stranger saw a well-formed concrete base,
crowned with two bent rusting bolts
and anyone’s drink can,
but not with a bronze athletic god.

They walked back for iced tea and talked
more about their hero.

The stranger noticed the beauty
of utter poverty’s luxury:
photographs of smiles everywhere.
On tables, fridge, walls, mirror, doors.
Children loved by parents.
Parents loved by children.
Some came in as the two sat close and shared.
They said ‘hi,’ heard a strange accent,
shook hands (except the girls, who still said ‘hi’)
and asked where he came from.
With those photographed smiles.

The stranger left America carrying new luggage:
greater respect for a hero
and memories of a day
spent with fine people.
He still wonders
whether the council’s promised replacement statue
stands, or did for a while,
in the Jesse Owens Memorial Park.