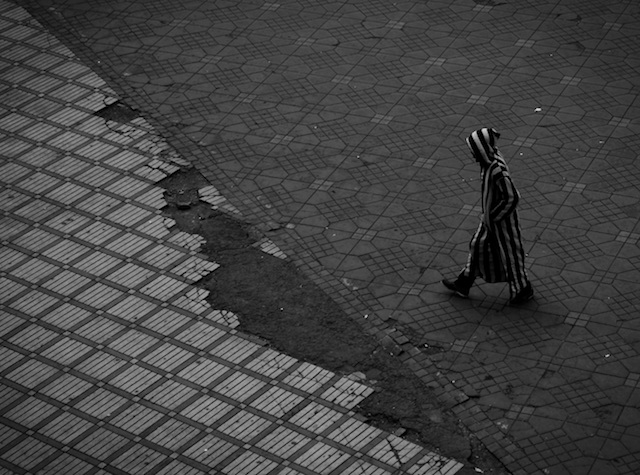 He slowly lifts his head. It weighs a ton. His shirt clings to his back as he pushes himself up from the road surface. His arms scream in protest as his body shakes, aching and broken from the endless hammering onslaught.

He has no illusions of course; his current predicament is of his own making. Facilitated, perhaps, by the malignant indifference of a faceless power, but his nonetheless. It seems absurd that he could be so easily bowled over, bulldozed into a shaking wreck by momentous forces with only the best possible intentions.

The noise subsides and is replaced by a gaunt quiet; a white noise, the rain which falls gently but with no more deliberation or awareness than the forces which put him down moments before.

Now, more than ever, time feels finite. The setback feels like death, and the dread that before was quietly pushed back rushes forward like a sonic boom. The shaking isn’t just physical. The reality of present circumstance turns into fear and grips him like a vice. He feels himself pressed back into the rough ground by a wave of despair.

His story is by no means unique; he walks a path not too uncommon to anyone else, his decisions not too far from average. More risk, more impulse, maybe. Undeniably at the mercy of processes, both physical and not, that are largely beyond his control, but not beyond a measure of adaptation. Every variation on every decision he’s ever made suddenly becomes utterly important, as if tracing back through years of existential entropy will somehow provide an answer, the sum of countless insignificant parts painting a clear picture as to how the hell he got here.

He searches for another emotion, something tangential to the cold fear that pins him back to the ground. There is no anger; his predicament is his own, and anger at himself feels counter-productive. Self-pity offers a fleeting comfort that only delays the action that must follow. Disbelief? It’s hard to abandon reality with your face against the black, oil-stained surface of a cruelly indifferent world.

A faint glimmer. He pushes himself off the ground again. His arms are still shaking, but there’s strength to push past it. He still feels fear, but the courage to carry on peers through the terrifying darkness like a candle in a dark room. Where there was nothing but a dead, empty street before him, a path emerges.

He rises at last to his feet, on shaky legs. The pain lingers, but gives way to determination. The fear ignites a deep and unrelenting resolve as he realises there is only one suitable course of action. The idea itself is not a revelation; only the obvious truth that it was there all along.

The road falls away as he straightens up. There’s still nothing but the quiet, the rain, the smell of the bitumen, and the unmistakable reality that things are going to be tough from this point forward. But fighting the dark is a lot easier when you’re vertical and facing it head-on.

Inside his shattered mind and broken frame, a stoic voice cuts through the void like a flaming razor and issues a single, blunt command: