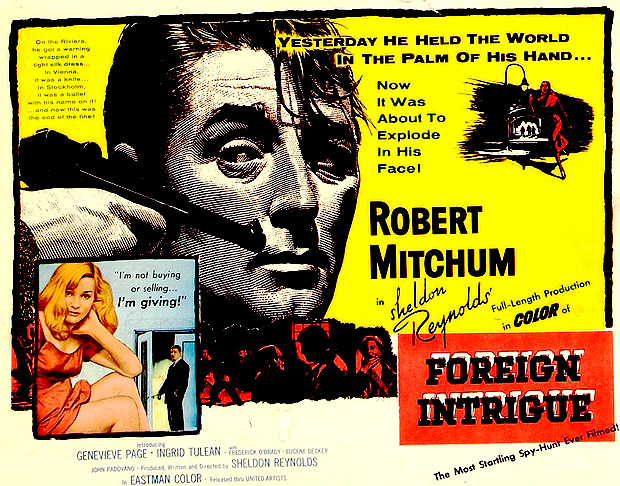 Starring Robert Mitchum and Genevieve Page, this 1956 film is a stylish mystery thriller complete with double dealing spies, blackmail and picturesque European settings. I call it “film noir in color”.

The indefinite ending has been criticized by some reviewers because the film seems to lack a satisfying epilogue (perhaps there were plans for a sequel?). However, the movie does keep you guessing long enough to make for an interesting and compelling story.

Directed by Sheldon Reynolds, Foreign Intrigue is his film adaptation of the classic TV series by the same name which he directed from 1951 – 1954. You gotta love those classic 1950’s style screen titles!

It’s interesting to note that macho actor Robert Mitchum spent 3 months in jail after being arrested for marijuana use in 1948.

During the post-Reefer Madness era, pot was considered a “hard” drug like heroine or cocaine. Mitchum caused a big scandal when police arrested him along with actress Lila Leeds, dancer Vickie Evans and real estate agent Robin Ford at Leed’s home on Ridpath Drive in LA.

The media controversy surrounding his “bad boy” reputation continued for about six months and Mithchum was quoted at the time as saying that the cannabis bust would be the “bitter end” of his Hollywood acting career.

Obviously, the dire prediction was not accurate because Robert Mitchum continued making films until 1997, including some notable historic movies.

He played roles in many cowboy westerns, including several Hopalong Cassidy vehicles, but his legacy is more likely to be remembered as a “tough guy” character in films like Foreign Intrigue, The Enemy Below (1957), Cape Fear (1962), and the World War Two epic The Longest Day (1962).

In 1975 he portrayed Raymond Chandler’s famous detective character Phillip Marlowe in the movie Farewell, My Lovely.

Although film critic Robert Ebert referred to Mitchum as “the soul of film noir,” the actor himself made this typically self-effacing remark about his acting ability during a BBC interview:

Look, I have two kinds of acting. One on a horse and one off a horse. That’s it.