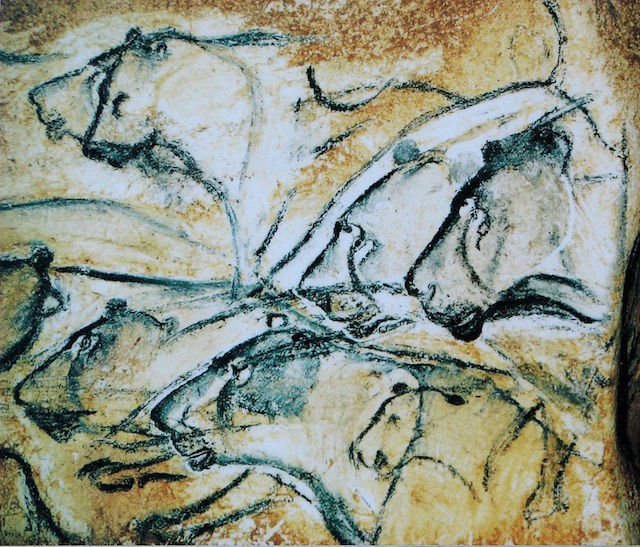 “She checks her belongings, stored in the leather backpack sewn by her father. Candle, fuel, and lighter; a carving knife and a brand new set of pork skin rags. She also carried small baskets colored with red, black, and three different shades of beige. Her water container was still full. After a few hundred feet of squeezing through narrow passageways, and after almost slipping into a ravine, she arrived. She felt the walls and discovered its topography: grooves and bumps. Then, she knew exactly how to start.”

The scene depicted above could very well be a good representation of early humans and their daily routines (part of which included art and painting). The art of indigenous persons is downplayed in popular culture, when in fact, it was a monumental effort and gorgeous artistic endeavor – and often as impressive as the herds of running animals that decorate stone walls. In order to bring visibility to the magnificent efforts of early humans to the general public, a science museum recently open with a complete, life-size replica of the Chauvet-Pont-d’Arc Cave, the original of which is in Southern France. (Reuters has a even more photos of the interior.)

The Chauvet replica introduces more context to the art of early humans, and perhaps also shatters some misconceptions. The mainstream opinion is that the art represented a hunting ritual. But why are modern humans so quick to assume that early humans were not intelligent or interested in the aesthetics of art? But rather that they were searching for meat or depicting hunting practices? This belief is reminiscent of the mainstream construct of the caveman eating raw meat. I believe that this construct theory has been repeated throughout time is because the image of early humans are brutish has been published in countless textbooks and preached to many students and the broader public. One textbook, written by author Ernst Gombrich, repurposes the idea of early humans as unintelligent. This is a textbook that is widely in art history college classes. Here’s how they describe the art from that period:

“In other words that these primitive hunters thought that if they only made a Picture of their prey – and perhaps belabored it with their spears or stone aches — the real animals would also succumb to their power.”

To be fair, that book was written over 50 years ago. When the book author looks at early human actions and deem them as merely functional and geared towards survival, he creates a barrier that makes it difficult for us to relate to our ancestors. It’s as if they were a different species, when in fact they were anatomically exactly the same as we are today.

Paleolithic art, traced back to 40,000 years, was preserved in the form of sculptures, paintings and carvings, composing a vast cultural portfolio that was present in early-humans daily lives. The repetition of motifs in different locations and surfaces, as well as in decorative objects, weapons, utensils, and sculptures (female representations measuring 2-5 inches). The figurative and graphical representations lead researchers to believe that the art carried meaning; a meaning that was shared among the individuals of that community.

I believe that the conclusion that the focus of the art was geared towards hunting – with the main argument being that the animal representations appear in large numbers – seems like a gross oversimplification. Researchers also not that bones and other vestiges of animals found on cave sites (generally considered meal leftovers) do not correlate to the images of animals painted on walls. It is entirely unreasonable to think that all this art is saying “dinner time!”

The substantial amount of effort needed for the artistic representations points at the significance it held for the ones involved. When museum visitors look at the replica cave in Chauvet, they feel closer to the lives of their ancestors who created art that represents their culture and reality. Similarly, with a visit to an anthropology museum we face that ancestor, interacting with daily life’s beauty and challenges just like any of us.

The peculiarities of environment and geography influence the characteristics of Rock Art. The wall paintings in depths of cave where the light does not reach – were found in northwest Europe for at least 20,000 years. Paintings in rock walls, rock shelters, and shallow caves have been found in archaeological sites all over the world, dated from 35000 to 12000 BC, (same link) The early-human explorers who spread out left their signature paintings in France, Spain, Brazil, Argentina, Indonesia, and many others. However, the style of the artistic representations vary with the location or even within the same location. This diversity leads us to believe that, like today, a cultural diversity already existed in early humans.

Even though the representations are diverse, they also indicate a common theme: different individuals, from unique environments, separated by thousands of miles or years, all had the same idea – use rock walls as a canvas to display and share their ideas and beliefs.

These findings allow us to see the past in a more complex and even poetic way – like the woman and her backpack in the beginning of this story – facets that are completely lost in the traditional Art textbook.