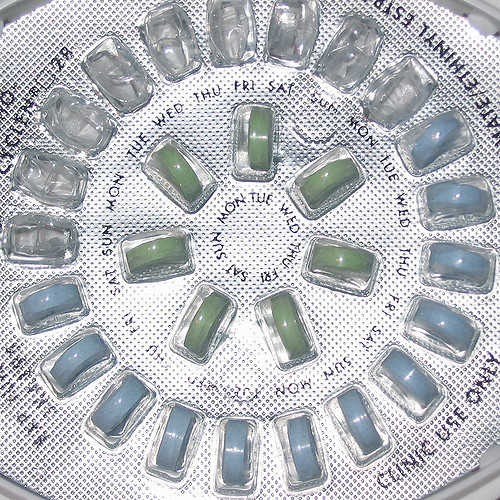 The average woman spends the majority of her reproductive life trying to avoid unwanted pregnancy. For example, if a family wants two children, the mother will spend approximately 5 years either pregnant, trying to become pregnant or postpartum. During the remaining 35 or so years of potential reproduction the mother wishes to avoid pregnancy. However, unintended pregnancies are common, as a 2011 survey found that 45% of the 6.1 million pregnancies in the United States were unintended. The majority of these unintended pregnancies, 42%, ended in abortion. The economic impact of unplanned pregnancy is large, with the total public expenditure in the United States on unintended pregnancies was estimated at $21 billion in 2010. The most common way of avoiding pregnancy, and still maintaining an active sex life, is to use contraception. The majority of available contraceptives are aimed at women; including intrauterine devices (IUD) or coils, spermicides and the combined oral contraceptive pill, commonly known as “the pill”.

Intrauterine devices (IUDs) are inserted into the uterus where they prevent pregnancy via two methods. Hormonal IUDs release small amounts of hormone that locally act to make the uterus a fatal environment to sperm. The copper in copper IUDs acts as a spermicide that damages sperm that enter the uterus. Source.

Men, on the other hand, have only two options: condoms and vasectomy. Condoms are a popular form of birth control as they also protect against STDs. However, there is an 18% per-year pregnancy rate with typical condom use. A vasectomy is a form of sterilization and a far more permanent contraceptive involving the cutting of the vas deferens, the tube through which sperm move from storage to ejaculation. Although considered permanent, vasectomies can be reversed, but this is not always successful.

There is clearly a need for a male contraceptive, but why has this need not been answered? Five conditions must be met for a male birth control method to be effective: 1) It must be at least as effective as the pill, 2) reversible within an acceptable time period, 3) have very few side effects, 4) have no effect on future progeny and 5) be inexpensive. Second, there are a number of obstacles to developing a male contraceptive, including: 1) the blood-testes barrier, 2) the sheer number of sperm produced by the average man, and 3) the fact that sperm production is continuous rather than a monthly event as with women. Despite these obstacles, a multitude of potential male contraceptives are being developed.

There are three categories of birth control: hormonal, physical and non-hormonal. Hormonal contraceptives are those that act on the endocrine system to prevent pregnancy, two examples of female hormonal birth control are the pill and hormonal IUDs. In men, an endocrine negative feedback loop, involving testosterone (and other androgens) and gonadotropins, suppresses spermatogenesis. The injection of androgens and other anti-gonadotropic agents suppresses gonadotrophins and consequently spermatogenesis, but also causes multiple side effects, including decreased libido, mood swings, weight gain, and abnormal glucose levels. In addition, the effects of hormonal contraceptives are not consistent between men, and is particularly affected by ethnicity. Administration of testosterone is a more successful contraceptive in East Asian men than Caucasian men, 90% of East Asian men stop producing sperm while receiving testosterone in contrast to only 60-80% of Caucasian males. Two hypothesized mechanisms behind this ethnicity effect are differences in testes microstructure and testosterone metabolism.

A potential hormonal male contraceptive is 7 alpha-methyl-nortestosterone (MENT), a synthetic steroid that resembles testosterone. MENT®, currently being developed by the Population Council, is administered as a subdermal implant effective for 12 months. Eight out of the 12 men given the highest dosage produced zero sperm during the 12 month test period. Unfortunately, side effects common to testosterone treatment were also seen. As hormones are complex and play many roles in the body , physical and non-hormonal contraceptives may be a better option. These treatments are less likely to have these unexpected and unwanted side effects as their targets are more specific, with fewer broader biological roles.

Physical contraceptives do exactly what their name suggests and either 1) physically restrict sperm travel or 2) damage sperm in transit. A well-known female physical contraceptive is the diaphragm, a soft silicone or latex dome that covers the cervix and prevents sperm entry. Two physical male contraceptive techniques are currently in development. The first is Vasalgel™, on which a successful trial in rabbits was published just last month (March 2016) and will likely begin human trials later this year. Vasalgel™ is a hydrogel polymer injected in the vas deferens, where it hardens and creates a physical barrier to sperm passage.

Vasalgel™ is a hydrogel polymer injected into the vas deferens. After injection vasalgel forms a barrier within the vas deferens that sperm cannot swim through. Image provided by www.parsemusfoundation.org

Administration of vasalgel to 12 male rabbits resulted in no observable sperm production over the 12 month follow-up period. Though currently advertised as a method of sterilization, sperm flow is expected to be restored by flushing the vas deferens with a sodium bicarbonate solution.

A similar physical method is reversible inhibition of sperm under guidance (RISUG®), the injection of a synthetic polymer called styrene maleic anhydride (SMA) into the vas deferens. Rather than preventing sperm passage, SMA coats the lining of the vas deferens, creating an unfavorable acidic environment that ruptures sperm heads. Similar to Vasalgel, this treatment can be reversed by flushing the vas deferens with a sodium bicarbonate solution. Vasalgel and RISUG are both at the trial stages of development, the former in the United States and the latter primarily in India.

Promising targets for male contraception currently in development include proteins required for sperm development and maturation, motility, and sperm-egg interactions. All of these proteins are shown to be required for sperm function and fertility in humans. A particularly promising target is the protein epididymal protease inhibitor (EPPIN). Eppin binds to the protein semenogelin; this interaction is required for human sperm motility and fertility. Eppin Pharma Inc. is developing a small organic compound that binds to Eppin and prevents Eppin-semenogelin binding. Targeting Eppin proved to be both effective and reversible in macaques. Contraceptives interrupt mammalian sperm motility can be described in two stages. The first stage involves sperm movement after ejaculation and through the female reproductive tract, which requires glycolytic enzymes, many of which are specific to sperm, including germ cell specific GADPH. Before fertilization of the egg sperm become hyperactive, in order to penetrate the egg. This hyperactivity involves the influx of calcium ions into the sperm tail, a process dependent on the protein CatSper. Both of these sperm motility proteins are gathering interest as contraceptive targets, but neither are as far into development as Eppin. Sperm proteins show great potential as contraceptive targets, however the number of proteins present in sperm is not insubstantial and more work is needed to understand their protein composition.

Source: How far are we from “the pill” for men?