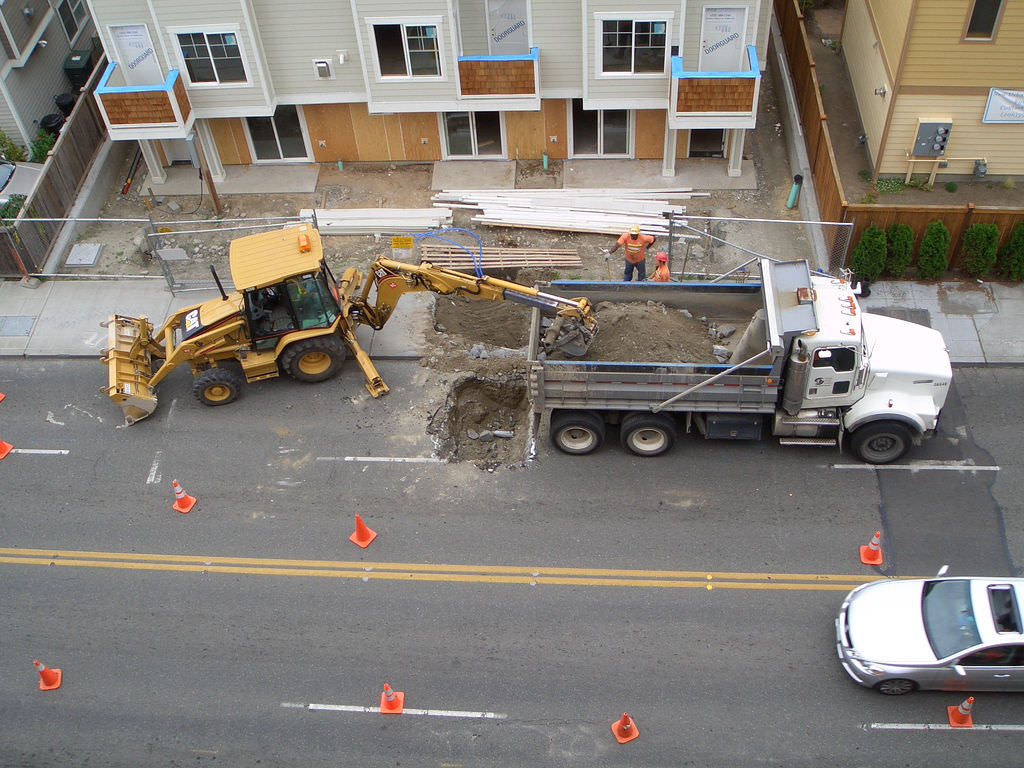 I.
Driving through the CD
Where I rarely ever come
The streets are ever changing
Thanks to developer scum
Familiar sight of cement trucks
And bulldozers by the score
A hole in the ground
A hole in my heart
Murder Mart, it is no more

In June of 1994,
I moved in with Hamish Todd
to a house on the corner
of 24th & Union,
right behind the Key Bank parking lot.
I was going through a divorce,
and it seemed like a good idea
at the time.
The only other urban pioneers on our street
were a plucky, albeit jittery, couple
who actually owned their new house.
They didn’t talk to us.
A fairly steep staircase led up
to our house, a smaller set of steps
for the porch and front door.
The doorknob, locks, and frame
of this door were heavily and deeply scarred
from the no-doubt daily attempts
to jimmy it.
Luckily Dunlap,
Hamish’s huge Great Dane/Lab mix,
was always inside when we were out
and his rafter-rattling howl
would generally send our thieves on their way
after their initial, crude blows.
My new, straightened circumstances
had left me carless,
but that troubled me not because
it was a particularly glorious summer that year
and I reveled in my new role
as inner-city pedestrian.
Late one evening, I was strolling home
from a reading at Café Paradiso
when a fellow coming from the opposite direction
asked for a cigarette.
Because I was a socialist,
I gave him one—a Pall Mall,
back in the days when they
only came unfiltered and
being the bearer of the red pack
with its coat of arms marked one as
a Smoker of Distinction.
“Man, give me two,” said he.
“Sorry, these gotta last me thru tomorrow,”
I replied, thereupon he snatched the whole pack
from my hand, crushing it into his gnarled fist
as he strode cursing down the sidewalk.
Well, that settles THAT, I thought.
Unfortunately, I was not lying about
making them last—
I was flat broke (otherwise,
I would’ve been drinking with poets)
and didn’t get paid until Friday.
So there was nothing for it but
to raid Hamish’s penny jar at home—
Murder Mart sold a brand called “Harley’s”
for 99 cents, which tasted like piano varnish
and were so loosely packed they burned down
in 20 seconds.
After that day, I decided to
cut my losses and only carried
Old Gold’s on my travels.

II.
At 23rd & Union
It was open 24-7
And sometimes a clerk or customer
Would find their way to Heaven.
Thus, it was not with tongue in cheek
Or fancy in his art
That led Hamish Todd to rechristen
Our deadly corner mart.

What is the history of a city?
Is it revealed in the trivial or the momentous?
The personal or communal?
There’s this anthology coming out,
Ghosts of Seattle Past, which promises to
address these questions. They’ve even given a teaser
with two pieces (one published in a local weekly,
the other in an online literary journal):

PM, who moved here in 2004
and waxed elegiac about the Canterbury
when it was a smoke-filled dive
(because he was THERE, man,
for the 30 or so remaining seconds that smoking
was allowed in any public space whatsoever.)
(Oh, and I think he might’ve fucked a waitress.
I dunno—P is a Gentleman,
So it’s sort of implied…)

KL, aka the Pie Lady,
so-called because all her poems were about
frigging PIE.
She got an MFA from UW.
She claimed the poems made a feminist statement
but no one was buying it so
she had to move to Spokane
where no one cared about the subtext
as long as the recipes worked.
Her memories (also from the mid-aughts)
centered at the Sunset Bowl
where she would sit at the bar
in a proper Northwest angst-y rage
because she’d done the math
and knew she could never afford a house in Ballard.
Oh, and her boyfriend was in a band
and she knew Lynn Shelton,
who I’m pretty sure lives in LA now.

This is Old Seattle?

(Full disclosure—I had an essay
under consideration for the anthology that
was eventually axed by the editors.
It was about the old Red Sky Poetry Theater,
and at least had the dignity of being set
in the last century.
It was subsequently published in
a well-regarded literary journal
based in Alaska.
So there.)

III.
Murder Mart sold chicken backs
At 60 cents a shot.
Deep fried they were in batter
The heat lamps kept them hot.
I would purchase three of them
And a bottle of vermouth, dry,
And on this simple repast
Would manage to get by.

Because we were alcoholics.
Hamish, as bar manager of the Crocodile,
drank for free,
but I, as a temp clerk at Grange Insurance,
had to budget.
Thus, the chicken backs were a revelation.
Who knew? Each back had
several pockets that contained
chunks of pure meat about the size
of an oyster.
And you could further assuage hunger
by nibbling little bits of fried batter
off the bone for an hour or so,
like a dog with a chew toy.
Which left more money for liquor.
I always got Lejon Dry Vermouth—
it was a dime more than Gallo,
but being in French made it seem
exponentially more classy.
“Alcoholic,” of course,
has such negative connotations nowadays,
but that’s because people forget
those brief moments of wacky fun and instead
focus on the brutal, humiliating decline
during all those depressing AA meetings.
In some ways, our drunkard’s trajectory
was a microcosm of the rise and fall of
the Seattle Grunge nonsense,
which came to its spiritual,
if not corporeal, demise
in that bummer of a year 1994.
In early summer, there was every evidence
that our little literary group
was riding the crest of a wave.
A proof copy of
Aloud: Voices from the Nuyorican Poets Café,
featuring Seattle poet Xavier Cavazos,
sat on the desk of our living room.
That June, a crew from PBS
would come to film Mike Romoth
for a segment of Bob Holman’s
“The United States of Poetry.”
Hamish, spurred on by the rumor that
Madonna was in town signing acts,
was inspired to form a poet’s band and
cash in before it was too late.
I even got to play rhythm guitar!
And yet, in a few short months,
it all went straight to hell—
Xavier turned all Benedict Arnold on us
and actually MOVED his ass to NYC,
Mike’s poem “The Patience Sutra”
(featuring me as an extremely photogenic extra)
ended up on the cutting room floor,
and Hamish, in a booze-fueled fit of paranoia,
decided the band was a bunch of
blood-sucking leeches riding on his coattails
and fired us before our virtually-guaranteed debut
as an opening act at the Crocodile.
(Actually, an abbreviated version of the band
–i.e., Hamish and myself—
made its first and last appearance in November
at the Weathered Wall as part of
the Surrealist Magic Theatre,
hosted by future real estate mogul Dave Meinert.
We performed the cornerstone of our act,
an epic song entitled “1000 Ways To Suck My Dick”
that was inspired by some Henry Rollins gibberish
that must have pissed us off at the time.
The night of the show was the same day
as the final court date of my divorce,
and I had started celebrating early by
drinking two bottles of vermouth
with no chicken backs at all,
because I didn’t want to be bloated
before the big gig.
As a result, my appearance was a drooling homage
to Jimmy Page’s infamous turn at Live Aid 86,
where he frequently managed to make strumming motions
that missed the strings of his guitar altogether.
A tape exists of this fiasco.
Even I can’t listen to it.)

IV.
Energy drinks weren’t invented
So we got by, by default,
With snorting crushed-up No-Doz
Washed down with 40s of Schlitz Malt
Internet was a pipe dream
But we still stayed in the loop
Flipping butts into the gutter
From our perch on the front stoop.

An up-and-coming slam poet
posted a video last year of a piece
addressing the real estate boom/housing crisis
that had everyone swooning,
as the Millennial Jeremiah stood intoning in front of various
Mom & Pop markets/family restaurants/indie bookstores
that would be tomorrow’s
Olympus Spa/Cheesecake Factory/Chase Bank.
While I certainly agree with the sentiment,
the finished product had a generic feel—
a writing prompt on the theme
Gentrification 101, suitable for
Cleveland or Buffalo, Albuquerque or St. Paul,
which is convenient,
because all the young poets are just
Passing Thru anyhow.
One second they’re the Voice of New Seattle,
the next you’re at their goodbye party
as they leave for the new tech job,
program directorship, librarian gig, whatever,
in the next hip city on the circuit.
Not to mention the ones that split
to get in on the ground floor of
the Queens Renaissance.
And as for old people—
they’re fucking worthless, too.
Across the street from the 20-foot pit
that was Murder Mart
(and who the hell is going to live in the freshly-built
Carcinogen Condos, anyhow,
with its toxic waste site laundry room—
the foundation is an old gas station, for chrissakes…)
is that reviled symbol of the Tech-Bro Regime,
Uncle Ike’s Pot Shop.
Although I have stood at
that corner bus stop hundreds of times,
I cannot for the life of me
recall what used to be there.
22 years is a long time,
which is when my residency ended
with a series of small whimpers,
starting when Hamish,
reeling from a series of Bad Decisions,
decided to quit drinking cold turkey.
In the fit of manic energy that ensued,
he decided to tear up the hideous and filthy
wall-to-wall carpeting so the theoretical
fine hardwood flooring could be exposed,
only to discover that said carpet
was all that was keeping
the rats in the basement out of the house.
That, and moving his girlfriend and her 3 dogs in
and still expecting me to pay half the rent,
were signs it was time to move on.
The point is, I guess,
our memories of place
are subjective and ephemeral,
and, for the bulk of us that live outside
the charmed circle of the historically important,
also somewhat trivial.
Thus, the iridescent play of
multi-colored lights from
the emergency vehicles shining through
the back window at 2AM
on greasy white wax paper crumpled
around a kitchen counter
is the only poem I can give you.
Because, as Dr. Williams said,
it is not an idea.
But a thing.

A hole in the ground, a hole in my heart
Murder Mart, it is no more.