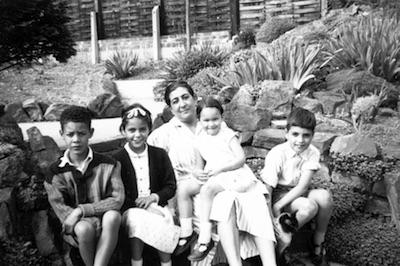 Times have changed. When I was a child in sixties’ Britain there was no Jessica Ennis, Jackie Kay, Chuka Umunna or Lewis Hamilton. Mixed heritage role models were thin on the ground: we saw film stars like Merle Oberon, or singers such as Bob Marley, but I can’t remember seeing any British role models. Now people of mixed parentage are everywhere, although it was not until the 2001 Census that we became ‘official’. In that year there were 677,177 of us. By 2020 it is estimated that 1.24 million people in the UK will be of mixed parentage.

In the fifties when I was born, unmarried pregnant women were encouraged to give their babies up for adoption. I, along with my three siblings, was one of them. However, the adoption agency files revealed what a headache we posed to them. We were not adoption material. ‘Baby is slightly coloured and adoption is impossible’ was the phrase written in my sister Ellen’s adoption papers.

We were all different ethnicities: our fathers from Asia or Africa, our mothers white. My mother was a young Swiss au pair working in London; my father an Indian engineering student. How they met I shall never know but I liked to think about them learning to jive at the Hammersmith Palais.

Despite our ‘slightly coloured’ status we were lucky. By chance there was a couple in Birmingham looking for children like us. An Englishman returned from World War Two with his much older Indian bride, a doctor. The pressure to make a success of adopting children nobody else wanted was the beginning of what I see as a life-long social experiment on the part of my parents. Despite our ‘disadvantaged’ start in life we could be successful if we stuck to our studies thereby proving the adoption agencies were wrong in their initial assessment of our adoption prospects. Doing our homework at the kitchen table it seemed as if we were products in an exam factory. We were hothoused. Years later, when I was going through my adoption papers, I found a letter from my adoption agency to my father saying: ‘Your story reminds us somewhat of the family “nobody wanted”. It is not often that we find people who will take these children or who are capable of doing so but those who do seem well rewarded.’

While we prospered at school, university and our respective professions we were brought up without physical or emotional affection; emotional intelligence was totally missing and the question of our identity was never discussed.

I was born a secret never to be revealed but in my thirties I grew tired of secrecy. I wanted all my identities as a Swiss-Indian lesbian adoptee with a British nationality to be visible and accepted. Being adopted was probably the easiest identity to reveal as it was no longer the taboo it was in the 1950s. Despite the homophobia of the 80s, coming out as a lesbian to the cosy world of the Women’s Unit of Southwark Council was relatively easy. However, being accepted as Black proved hardest of all even though the adoption agencies of the 50s had seen my ‘slightly coloured’ appearance as a major stumbling block. As a bid to assert my ethnic origin I changed my first name from Camilla to Kamila – a south Asian name – and my family name to Zahno, which belonged to my Swiss birth mother.

But identifying as Black appeared to be problematic. Why? I wanted to align myself with Black politics as I felt I too had experienced racism. I was proud of my Black and my mixed identity. Black politics in the 1980s was supposedly an inclusive term, including people from an Asian and African heritage. However, it seemed that people of mixed heritage weren’t Black enough. Standing in a queue at the National Film Theatre waiting for a ticket to see a film adaptation of Gloria Naylor’s The Women of Brewster Place, which explored the lives of seven African American women, a man of African heritage demanded I give up my place for him since it was more important for him to see the film than I. ‘But I’m Black too,’ I said. ‘Oh!’ he said, ‘So now White people are declaring they’re Black.’ I didn’t give up my place! Despite the growing trend of self-definition, a question, accompanied with a sceptical frown that really annoyed me was: ‘Indian? You don’t look Indian’, with the sub-text, ‘We are calling into question your right to call yourself Indian’.

Why were the boundaries of Blackness so zealously guarded? Although Black was used as an umbrella term to indicate an alliance between people of African and Asian descent, it was not always seen this way by all organisations. Some Asian groups did not like the term because they did not consider themselves ‘black’ in skin tone, believing the term was derogatory; some African groups wanted to reserve ‘black’ for themselves, having regard for their own particular history. Competition for funding also influenced these demarcation lines. It also seemed that we, as mixed heritage people, would ‘dilute’ the issues. I remember the term ‘visible minorities’ being used for a short time – a term imported from North America based on the visible darkness of one’s skin. I was forever being told, in patronising tones, that I didn’t understand racism because of my light skin. Really? So the fact that the children’s home thought I wasn’t adoption material wasn’t racism? Or the stones thrown at me as a schoolgirl weren’t a result of racism? And what about the schoolboys who demanded to see if my bum was a brown as the rest of me? I disliked the term Black being used in a competitive way – to me it was nonsense that there should be a hierarchy of Blackness. Surely identifying oneself as Black should be based on a common experience of racism? I continued to assert my Blackness, even if at times I felt undermined.

It was the advent of Mosaic, an organisation focusing on mixed heritage lesbians and gay men that brought me into contact with people like me. Mosaic had its origin in the 1990 International Lesbian and Gay People of Colour Conference. Among the many break-out groups was one just for us – mixed heritage lesbians and gay men. I remember about fifteen of us crowded into a small room and it was as if a tap had been turned on. It wasn’t that we were unsure of who we were but our voices hadn’t been heard. Now was the time to hear them and a time to make ourselves visible. I remember we mostly focused on talking about our ethnic backgrounds rather than our sexuality. Most of us belonged to lesbian/gay men’s groups but often the only other people of mixed parentage we knew were our siblings. Our experience was not documented or visible except, it seemed, in social work research which tended to focus on ‘the problem’ of being ‘mixed race’.

In the late nineties the term Black was expanded to include Black and Minority Ethnic (BME) which seemed more inclusive and did include people of mixed parentage and then expanded again to Black, Asian and Minority Ethnic (BAME) – not altogether satisfactory as it still has a focus on racial divisions – but outwardly more inclusive. Adoption policy too has been through various loops in dealing with BAME children. It shifted from not seeing us as adoption material to promoting transracial adoption in the 60s and 70s. However, this policy was discredited; placing black children with white parents came to be seen as a form of racism for not placing enough emphasis on the children’s cultural heritage; in response to this criticism, the placement of children with parents of the same heritage became the norm, and was enshrined in legislation in the Adoption and Children Act 2002. However, this led to the languishing of BAME children in institutions widely acknowledged to have a far worse impact on their upbringing than transracial parenting. Besides, in the 21st century there are many more children like me with a range of cultural backgrounds which makes ‘racial’ matching virtually impossible. The current policy is more flexible on matching and provides training and support for parents on their adopted children’s cultural heritages.

In any case, the concept of race is a social construct, not one rooted in reality. DNA tests of people all over the world reveal a mixture of geographical origins, reflecting historical patterns of migration. For some reason, interracial couples and their offspring have always been regarded with suspicion – in many cases with hatred – and to some extent still are. Otherwise why would we make up 9 per cent of children in care, a far greater proportion than mixed race people in the general population? We confuse people’s notions of race and identity. We don’t have a ‘community’ so how can we have an identity?

The story of Kamila’s search for her birth parents is told in her recently published book ‘Chasing Ghosts; Not Just an Adoption Memoir’ (Rona Books, 2016). Republished from Open Democracy.