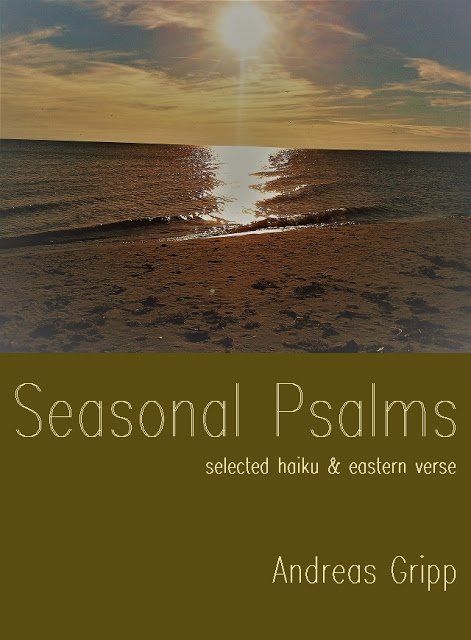 Toronto’s Harmonia Press have been publishing rather fine chapbooks of Canadian poetry since 2013. Among their stable of authors is Andreas Gripp. Mr. Gripp has published twenty-two volumes of poetry covering a wide range of styles yet maintaining a consistently high quality, and we think his work deserves a larger audience.

Thankfully, Harmonia Press have begun releasing some of his books under a Creative Commons license, so that we at The Star may share with you and introduce you to the work of a very fine writer indeed.

Our choice this week is Mr. Gripp’s slender chapbook, Seasonal Psalms: Selected Haiku and Eastern Verse which reveals Mr. Gripp’s formalist skill and imagination. In addition to the haiku, tanka, and sijo forms with which our readers are eminently familiar, he has also written verse a new generative form called shanzi, which he himself created in 2005 and announced on World Haiku Review‘s “Poetry Bridge” online forum. In the seven-line shanzi, the first two lines introduce the image/subject; the next two lines amplify what is affected by the image/subject; the last three lines focus on a new image/subject that complement and provide a meditative conclusion. One example is his poem “January’s Illusion”:

The farmer’s flat field,
a lake of white

All in all, a very satisfying book.