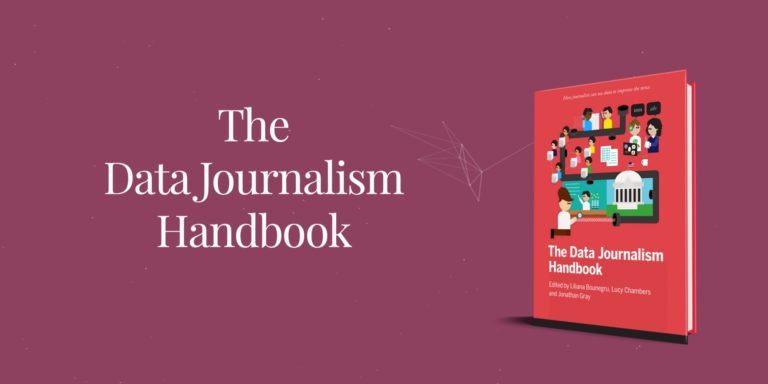 The first edition of The Data Journalism Handbook has been widely used and widely cited by students, practitioners and researchers alike, serving as both textbook and sourcebook for an emerging field. It has been translated into over 12 languages – including Arabic, Chinese, Czech, French, Georgian, Greek, Italian, Macedonian, Portuguese, Russian, Spanish and Ukrainian – and is used for teaching at many leading universities, as well as teaching and training centres around the world.

A huge amount has happened in the field since the first edition in 2012. The Panama Papers project undertook an unprecedented international collaboration around a major database of leaked information about tax havens and offshore financial activity. Projects such as The Migrants Files, The Guardian’s The Counted and ProPublica’s Electionland have shown how journalists are not just using and presenting data, but also creating and assembling it themselves in order to improve data journalistic coverage of issues they are reporting on.

Changes in digital technologies have enabled the development of formats for storytelling, interactivity and engagement with the assistance of drones, crowdsourcing tools, satellite data, social media data and bespoke software tools for data collection, analysis, visualisation and exploration.

Data journalists are not simply using data as a source, they are also increasingly investigating, interrogating and intervening around the practices, platforms, algorithms and devices through which it is created, circulated and put to work in the world. They are creatively developing techniques and approaches which are adapted to very different kinds of social, cultural, economic, technological and political settings and challenges.

Five years after its publication, we are developing a revised second edition, which will be published as an open access book with an innovative academic press. The new edition will be significantly overhauled to reflect these developments. It will complement the first edition with an examination of the current state of data journalism which is at once practical and reflective, profiling emerging practices and projects as well as their broader consequences.

Contributors to the first edition include representatives from some of the world’s best-known newsrooms data journalism organisations, including the Australian Broadcasting Corporation, the BBC, the Chicago Tribune, Deutsche Welle, The Guardian, the Financial Times, Helsingin Sanomat, La Nación, the New York Times, ProPublica, the Washington Post, the Texas Tribune, Verdens Gang, Wales Online, Zeit Online and many others. The new edition will include contributions from both leading practitioners and leading researchers of data journalism, exploring a diverse constellation of projects, methods and techniques in this field from voices and initiatives around the world. We are working hard to ensure a good balance of gender, geography and themes.

Our approach in the new edition draws on the notion of “critical technical practice” from Philip Agre, which he formulates as an attempt to have “one foot planted in the craft work of design and the other foot planted in the reflexive work of critique” (1997). Similarly, we wish to provide an introduction to a major new area of journalism practice which is at once critically reflective and practical. The book will offer reflection from leading practitioners on their experiments and experiences, as well as fresh perspectives on the practical considerations of research on the field from leading scholars.

The structure of the book reflects different ways of seeing and understanding contemporary data journalism practices and projects. The introduction highlights the renewed relevance of a book on data journalism in the current so-called “post-truth” moment, examining the resurgence of interest in data journalism, fact-checking and strengthening the capacities of “facty” publics in response to fears about “alternative facts” and the speculation about a breakdown of trust in experts and institutions of science, policy, law, media and democracy. As well as reviewing a variety of critical responses to data journalism and associated forms of datafication, it looks at how this field may nevertheless constitute an interesting site of progressive social experimentation, participation and intervention.

The first section on “data journalism in context” will review histories, geographies, economics and politics of data journalism – drawing on leading studies in these areas. The second section on “data journalism practices” will look at a variety of practices for assembling data, working with data, making sense with data and organising data journalism from around the world. This includes a wide variety of case studies – including the use of social media data, investigations into algorithms and fake news, the use of networks, open source coding practices and emerging forms of storytelling through news apps and data animations. Other chapters look at infrastructures for collaboration, as well as creative responses to disappearing data and limited connectivity. The third and final section on “what does data journalism do?” examines the social life of data journalism projects, including everyday encounters with visualisations, organising collaborations across fields, the impacts of data projects in various settings, and how data journalism can constitute a form of “data activism”.

As well as providing a rich account of the state of the field, the book is also intended to inspire and inform “experiments in participation” between journalists, researchers, civil society groups and their various publics. This aspiration is partly informed by approaches to participatory design and research from both science and technology studies as well as more recent digital methods research. Through the book we thus aim to explore not only what data journalism initiatives do, but how they might be done differently in order to facilitate vital public debates about both the future of the data society as well as the significant global challenges that we currently face.

This blog has been reposted from http://jonathangray.org/2017/12/20/new-edition-data-journalism-handbook/